For at least 40 years, The Wharf has been a Hallowell institution. (Photo by Susan Cover Spectrum News Maine)

A Hallowell hangout for 40 years, The Wharf looks to relocate

A dive bar and music venue that has been part of the Hallowell downtown for at least 40 years is looking for a new home.

The Hydeout at The Wharf can no longer continue to stay in the basement of a Water Street building because it is for sale and the current owner will not give a long-term lease to the bar, said Wayne Hyde, bar owner.

“He refused to give me a new lease,” he said, referring to Stephen Hammond, who owns the property at 130-138 Water St. “You can’t work your business like that cause you never know what’s going to happen.”

Hammond did not respond to a voicemail left on his cellphone Monday, nor did he respond to a request for comment relayed through his attorney Walt McKee. 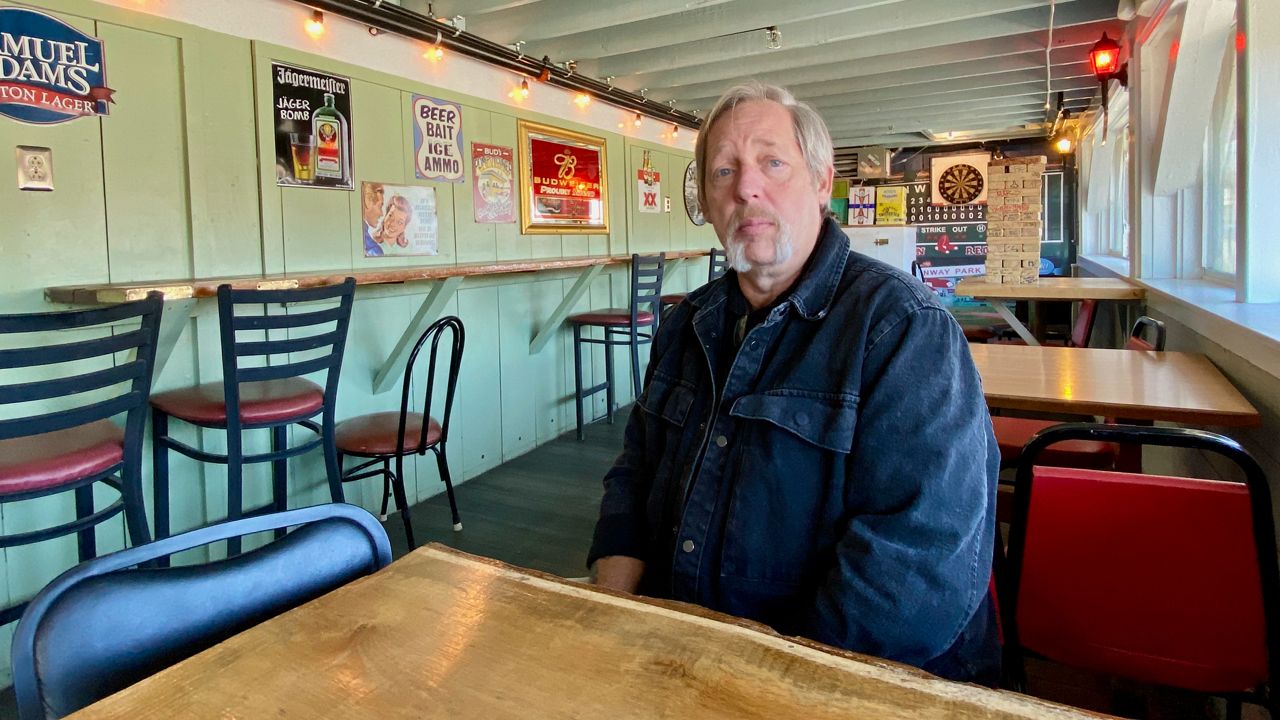 Wayne Hyde wants to move The Wharf to a new location, possibly Gardiner, because the building is for sale. (Photo by Susan Cover Spectrum News Maine)

The property, with a list price of just under $3 million, is sale pending through LUX Realty of Portland.

The bar known for its license plate décor, scribbles on the bathroom walls and live local music has been a Hallowell mainstay for all of musician Steve Jones’ adult life. He’s played thousands of gigs there over 40 years.

But beyond the music, the venue is part of the fabric of the community, he said.

“The Wharf, no matter who owned it, has been front and center,” Jones said. “If anything went wrong for anybody in the community, people would gather there and do benefits and rally around whoever needs the help, every time without fail. It’s been very much our place. The community’s place.”

Hyde took over ownership four years ago, hoping to stay somewhat busy after retiring from a career at Texas Instruments. Instead, he described his time owning the bar as “a battle.”

Some of his problems have been natural – the low-lying bar along the Kennebec River often floods in the spring – and others, manmade, such as the summer of 2018 when Water Street was rebuilt. Not to mention a nine-month closure because of COVID-19.

“I was here four months and I got flooded,” he said. “Then they tore the road out for a year and a half. Then I got a pandemic. Now I’m dealing with this.”

In addition to not having a long-term lease, Hyde’s rent recently went up $500 a month. His parking spaces on Front Street closest to the bar have been cut to two and he’s no longer allowed to use the grassy area along the river for outdoor music on Old Hallowell Day, he said. 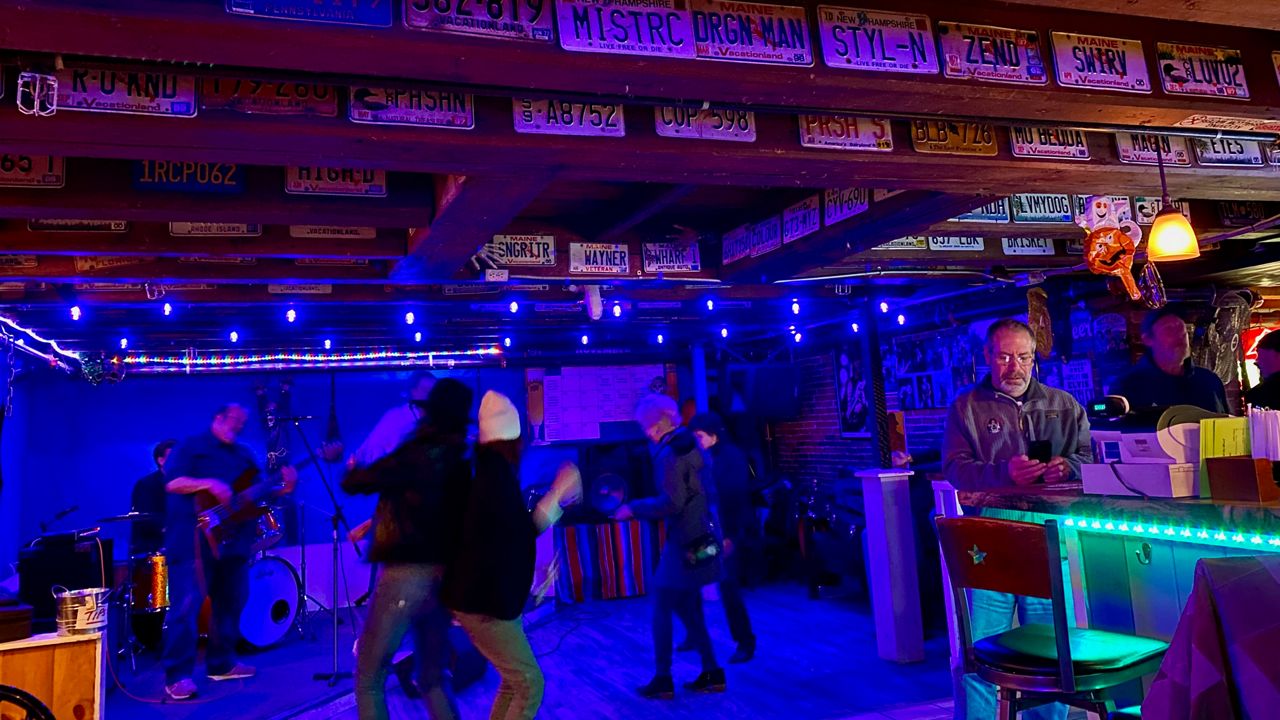 Dancers enjoy the music last Thursday at The Hydeout at The Wharf in Hallowell, which is looking for a new home. (Photo by Susan Cover Spectrum News Maine)

In October 2020, the Hallowell Planning Board gave unanimous approval for Hammond to convert the apartments in the two, four-story buildings to condominiums. Whoever buys the buildings has five years from the date of approval to do the conversion and they must show they have the financial capability to do so, according to Hallowell Code Enforcement Officer Doug Ide.

When it comes to relocating, Hyde said he’s looked at six places so far, with more on the way. The City of Gardiner contacted him and is working to see if they have space that would fit his needs.

“I’m geared to leave, we’re going to leave, I tried to stay in the town, that’s not going to happen,” he said.

Musician Pat Pepin said she’s been playing at The Wharf since 1984, when she was a student coming out of the University of Maine at Augusta’s music program. She said nurses complete their training at local hospitals, but musicians need places like The Wharf to hone their skills.

“This was our practical,” she said. “You learn from your peers. You get to try things out. I came up here to go to college and I found The Wharf.”

Unlike other venues or restaurants that hire musicians to play in the background, The Wharf hires full bands, hosts open mic and open jam nights and offers music until midnight. It’s an old school bar, with a pool table, pinball machine and saloon doors over the openings to the restrooms.

The Wharf is in the heart of Hallowell’s downtown, which features a vibrant music and restaurant scene. On weekends, six different restaurants and bars often feature live music, giving visitors a chance to bar hop without the need to get in a car. Hyde knows that’s going to be difficult to replicate in a new location.

“That’s the one thing about Hallowell, you can walk around and hit five or six different places walking a block,” he said.

When he first started playing there in the 1980s, Jones said The Wharf had a dirt floor and the band played in the corner standing on a sheet of plywood. A guitar player and singer/songwriter who plays with multiple bands in central Maine and in the Boothbay Harbor area, he said he can’t pick out one or two favorite Wharf gigs.

“I guarantee if your life flashes before your eyes and you have the highlights go by, there’s going to be many nights at The Wharf that are going to be floating by my consciousness,” he said. “Everyone together. Just that feeling of love in the room.”

Pepin, a saxophonist, singer and guitar player, has played rooms across the country, including music meccas like Nashville. For some, venues like The Wharf become more like community centers or churches – not just bars.

“Most every county everywhere will have this place the locals know, ‘this is where my people are,’” she said. “Most vibrant communities will have a place where all are welcome. I’m heartbroken. We all are.”