Officials hoping to build a large land-based fish farm in Jonesport told local planners Tuesday they hope to begin work on the project this year.

Bill Lane, vice-president of Gartley & Dorsky engineering in Camden, said Kingfish Maine is nearly ready for erosion control and tree removal on the 93-acre site on Dun Garvan Road. But they are waiting on two permits from the state and one from the federal government – and then they will be back before the Jonesport Planning Board for final approval.

“We thought it was time to come see you,” Lane told the board. 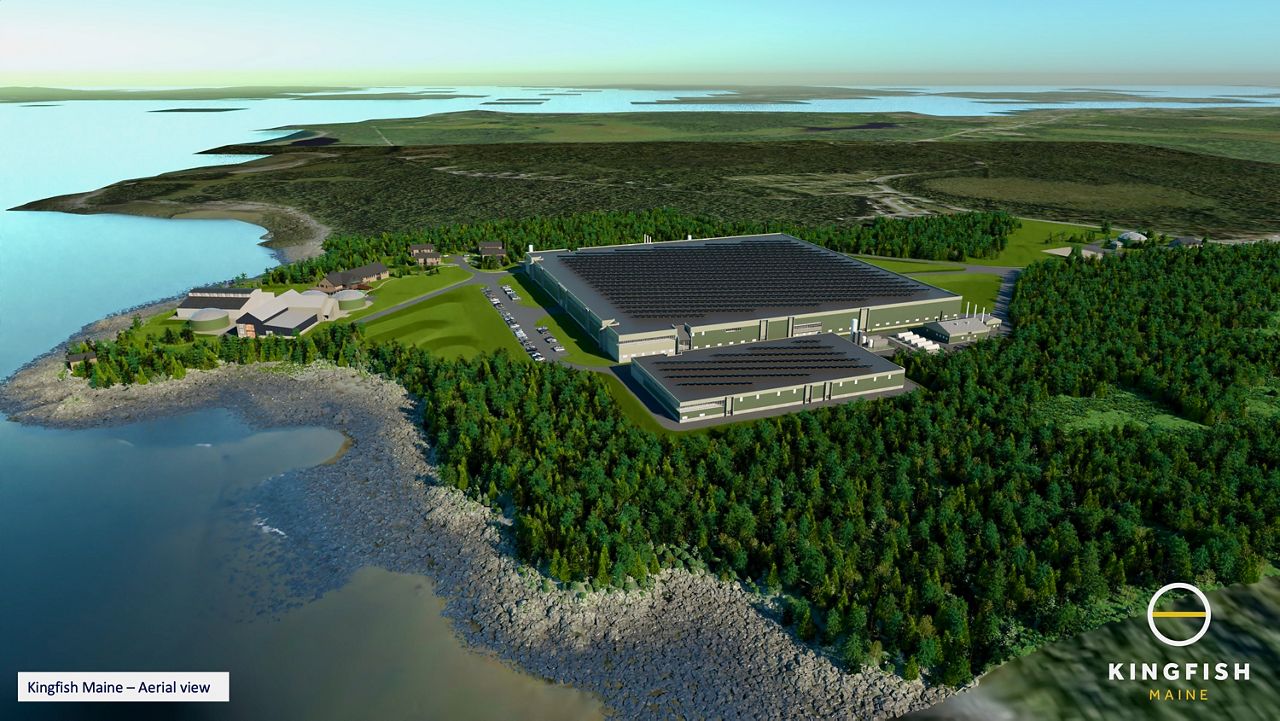 Kingfish Maine wants to build a land-based aquaculture system to grow yellowtail kingfish, commonly used in sushi. The structures would total about 573,500 sq. ft. on mostly vacant land – there are a couple of abandoned buildings near the main road – northeast of the center of town.

In addition to what’s needed for the fish operation, the company is proposing to build residential units for staff, a store and an information center, Lane said. The development, which will face Mason Bay Road, is about nine miles south of U.S. Route 1.

The land was most recently used in the 1980s by a net manufacturer and before that, was a blueberry field.

Jonesport resident James Smith stopped by Tuesday’s meeting in hopes of getting more information about the project. After asking about whether scallop draggers or lobstermen would be affected by the project, he said he’s encouraged that the facility could provide much needed jobs in the area.

“There’s just nothing here except lobstering now and it’s sad,” he said.

The company plans to install pipes extending into Chandler Bay to draw in water for the fish tanks and pipes that will pump treated wastewater back out into the bay, Lane said.

Megan Sorby, operations manager of Kingfish Maine, said she doesn’t anticipate that the project will interfere with lobstering or scallop dragging. She said the Department of Marine Resources has told them to “make sure it is adequately marked with no intention to close that area off.”

Planning Board Chairman Frank Smith asked about the treated water that will be discharged into the bay. Sorby said what will be released will be cooler than what is taken in and that the salt content will be the same. Smith asked the company to come back when it has all its permits, which the company hopes to have by the end of November.

“I wouldn’t want to have a vote until all the permits are in,” he said.

The company said it considered 25 sites, most of them in Maine, before choosing Jonesport for its available land, “access to excellent quality seawater,” access to deep water and available power.

The factory would discharge up to about 29 million gallons per day of treated wastewater into Chandler Bay.

In June, the Maine Department of Environmental Protection issued a five-year permit to allow the wastewater discharge, finding that it would not lower water quality below its current classification. The Sierra Club Maine appealed the decision in July, arguing that the discharge would hurt eelgrass and other aquatic species in the bay.

“Along with the effects of the discharge in the immediate area, the decision to permit this discharge affects everyone in Maine, from those who enjoy Maine’s waters to Maine’s lobster and fishing industry, because of the far-reaching implications that the waste discharge could have,” a brief filed by the Sierra Club reads.

In response, the DEP rejected the appeal, saying the Sierra Club had failed to show “an aggrieved person” so it did not have standing to challenge the decision.

And though the company has its wastewater permit, it is still waiting on state approval of its site location, which must be completed by Nov. 22, according to DEP.

As part of its permitting process, the state also considers “economic or social necessity.” Washington County meets federal criteria for an area considered to be in economic distress, according to a March letter from the Maine Department of Economic and Community Development.

The letter lays out economic benefits from the $108 million construction project, which is projected to create 366 full-and-part time jobs totaling $19 million in labor income over the two years it would take to build the factory. 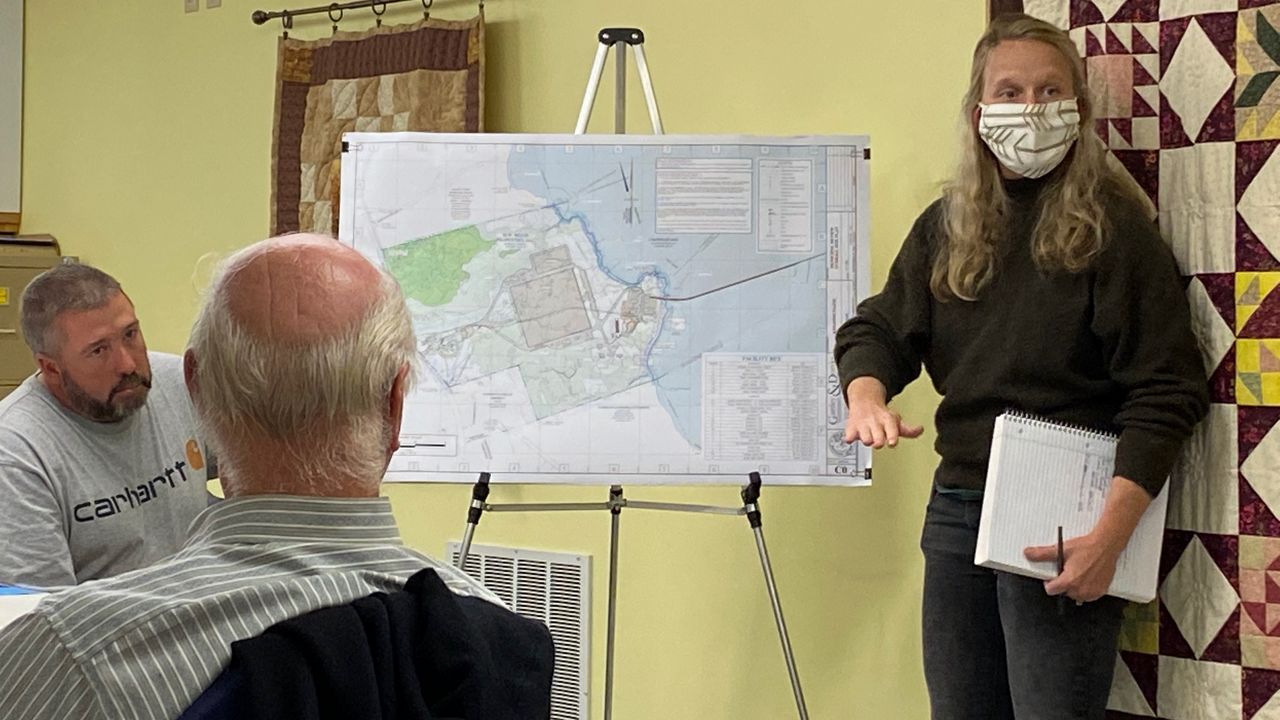 In addition, once the facility is up and running, it is projected to have a statewide economic impact of $28 million per year, 129 full- and part-time jobs, with $8.4 million in labor income in 2023. The company projects the average annual wage at the facility will be $60,000, which is significantly higher than Washington County’s per capita income of $41,094.

“In summary, it is Maine DECD’s determination that the economic benefits to Washington County and to the state of Maine are significant and will create needed jobs and investment in rural Maine,” wrote DECD Commissioner Heather Johnson.

The Kingfish project is one of four large-scale fish farms to be proposed in Maine in recent years. The first to get full approval – located in Bucksport on a former paper mill site – has yet to break ground. Whole Oceans plans to build a land-based salmon farm there.

In Belfast, Nordic Aquafarms also plans to build a land-based salmon farm, although local opposition has led to lawsuits that seek to prevent it from being built.

Then in the Gouldsboro/Bar Harbor area, American Aquafarms is proposing to put two closed-net pen systems in Frenchman Bay to raise salmon, with a processing plant in Gouldsboro. The company is awaiting state permits and opponents have vowed to fight the project.

In Jonesport, Code Enforcement Officer Elizabeth Fitzgerald told the Planning Board that she got a tour of the property and is confident there will be environmental safeguards in place.

“I’m very comfortable with the project,” she said.