Current Maine Gov. Janet Mills and former Gov. Paul LePage are staring down a "heavyweight" battle for the Blaine House in 2022. (Photos by The Associated Press)

The 2022 race for governor is shaping up to be a battle of two well-known titans, setting the stage for an expensive and potentially divisive contest, according to an exclusive Spectrum News/Ipsos poll 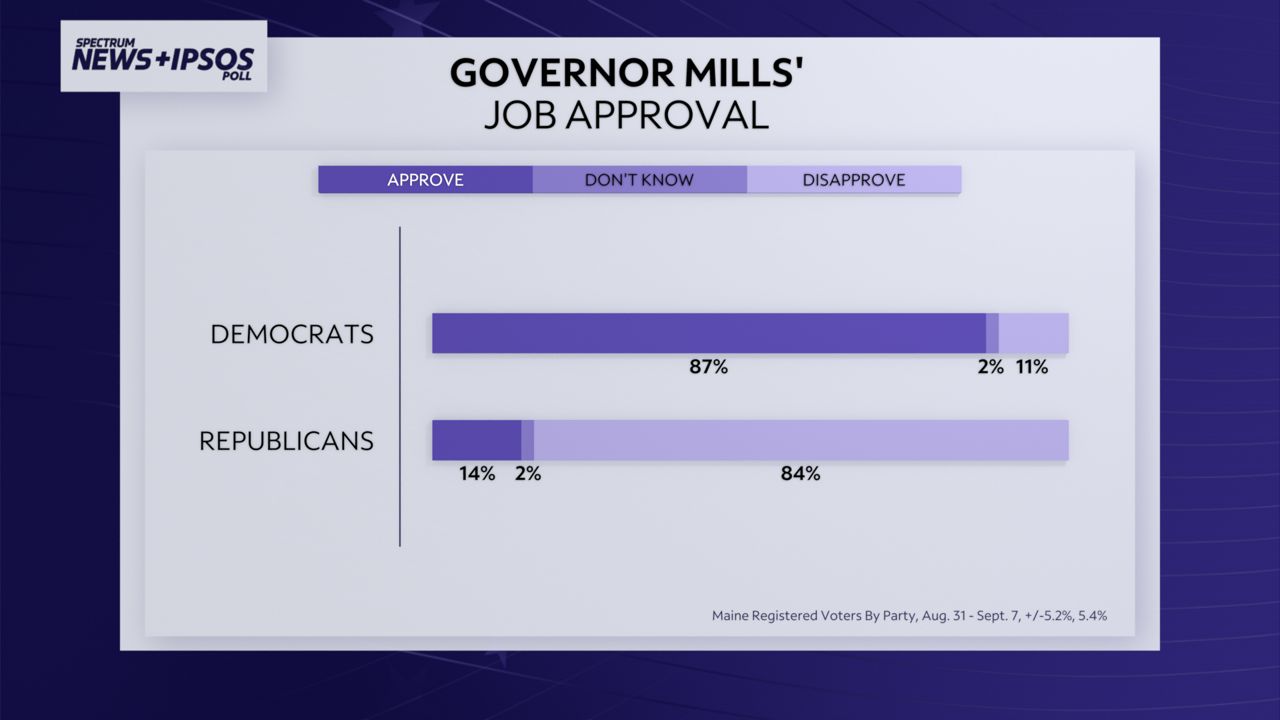 As for his likely opponent, Gov. Janet Mills, 48% said they approve of her job performance while 49% disapprove. With a margin of error of plus or minus 3.5 percentage points, those numbers essentially show a 50/50 split, said Mallory Newall, vice president of public affairs at Ipsos.

“This overall split is masking the huge partisan differences underneath,” she said. “What we’re seeing is this is just purely partisan politics at this point.”

“This is going to be a heavyweight fight and they personally don’t like each other,” said Mark Brewer, political science professor at the University of Maine at Orono. “For me, the most important thing is, are we going to have an independent or third-party candidate and if so, who? If you’re Paul LePage, you definitely want someone to run from Mills’ left.” 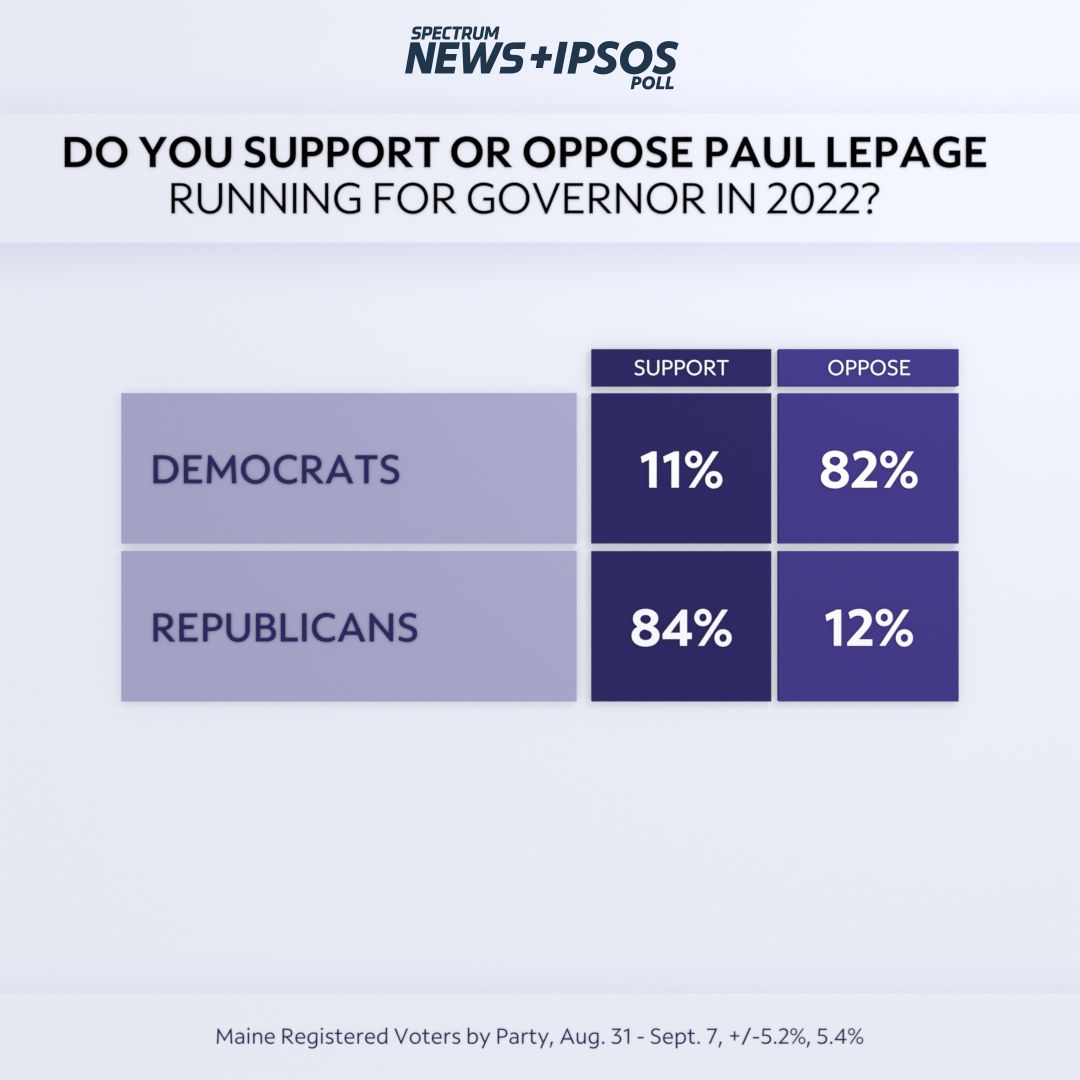 A third-party candidate could have a major impact on the race because, unlike federal elections, ranked-choice voting cannot be used in the vote for governor because courts have ruled it runs counter to the state constitution. When LePage was first elected in 2010, he won a five-way race with just 38% of the vote. Brewer said if the LePage vs. Mills match-up does materialize – Mills hasn’t announced she’s running but has raised nearly $600,000 to fund a campaign – it will likely be expensive, high-profile and personal.

The poll of 800 registered voters in Maine age 18 and older was conducted via telephone Aug. 31-Sept. 7. Sixty-one percent of respondents were reached by cellphone and 39% were contacted on a landline, according to Ipsos.

James Melcher, political science professor at the University of Maine at Farmington, said while some Democrats might be surprised there’s still strong support for LePage, he isn’t.

“He’s remained in the news,” he said. “He’s stayed visible. I’m not surprised it’s that close to even.”

Mills is battling on several fronts, with restrictions and mandates related to COVID-19 and public stances against progressive Democratic policies in the Legislature that put her at odds with Native Americans, labor unions and those who oppose the Central Maine Power corridor, Melcher said. 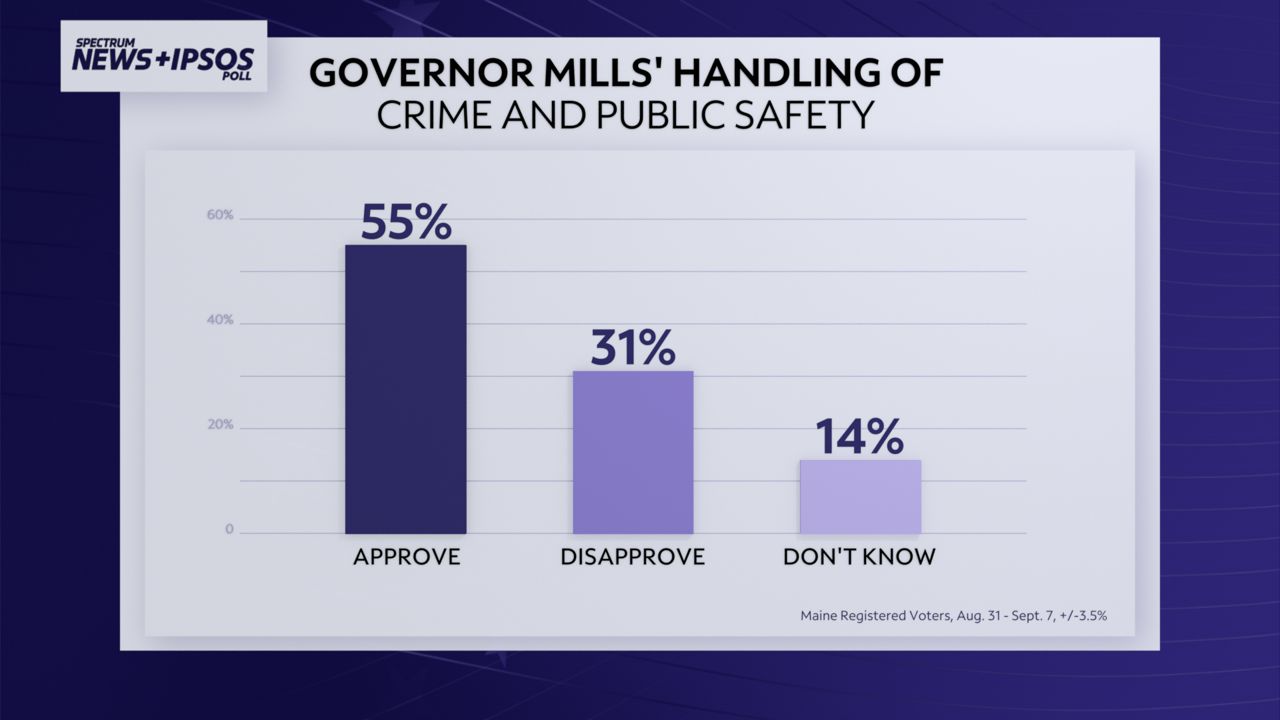 The Spectrum/Ipsos poll shows a significant decline in Mills’ approval rating compared to this spring, when a survey by Digital Research Inc. indicated 57% support for the governor. Her job approval has dropped to 48%, according to Ipsos, with 49% disapproving of her performance.

With the race more than a year away, Mills’ fate might rest with the outcome of the pandemic, Melcher said.

“Because COVID is fluid, I think some of that could be fluid,” he said.

With regard to the state’s Congressional delegation, Sen. Angus King, an independent, earned the most support with 55% of Mainers saying they strongly or somewhat approve of his performance. Sen. Susan Collins, a Republican, came in at 46% approval and 47% disapproval. 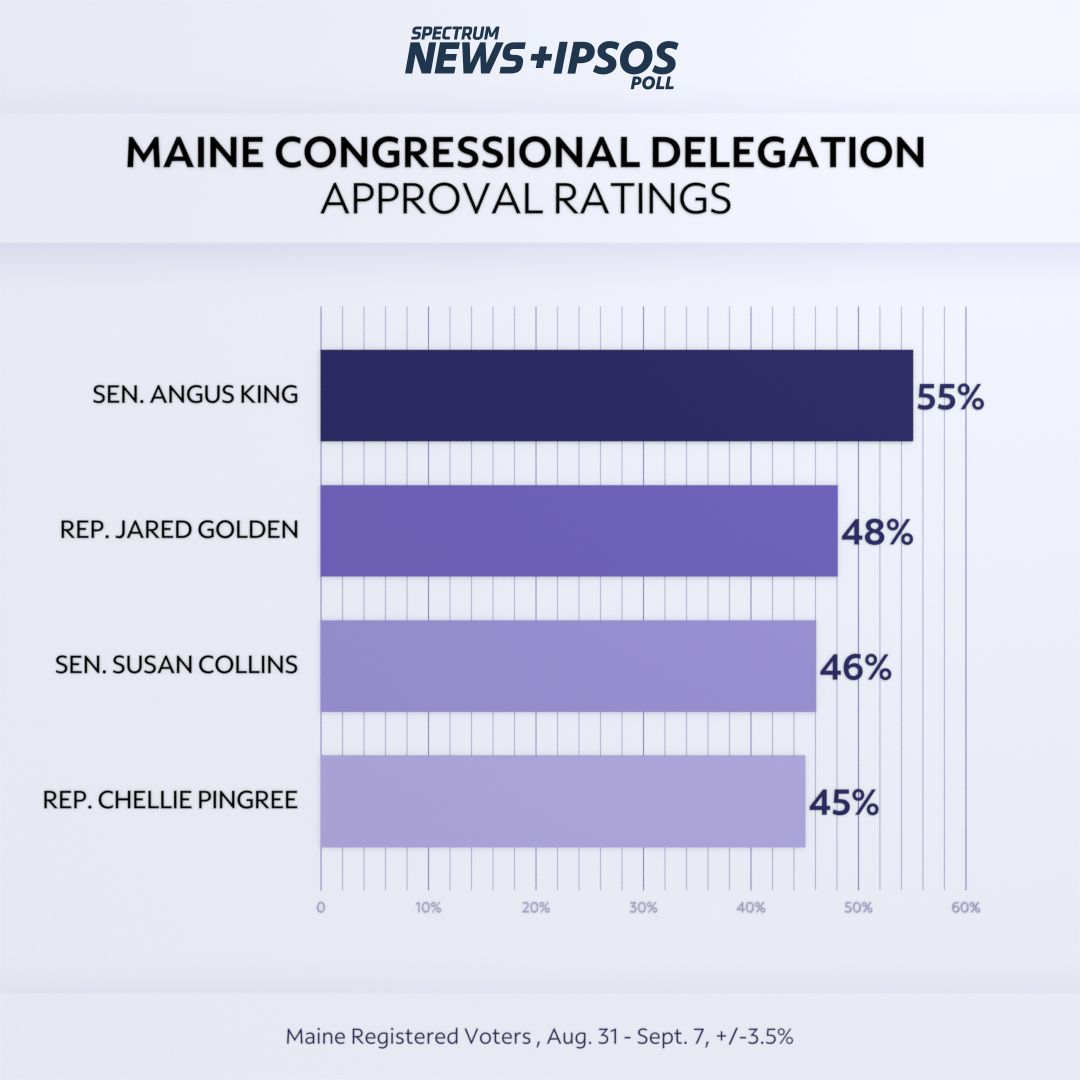 For the state’s two Democratic House members, U.S. Rep. Chellie Pingree of the 1st District earned 45% approval, 29% disapproval, with a high number – 26% – saying they didn’t know. Those polling numbers represent responses from 399 voters in the 1st District and have a margin of error of about 5 percentage points, Newall said.

In the 2nd District, where 401 people were polled, 48% approved of the job being done by U.S. Rep. Jared Golden, while 33% disapproved. That leaves 19% in the “don’t know” category. Golden is likely to face former U.S. Rep. Bruce Poliquin, a Republican, in 2022 for a rematch of a close race in 2018 that was decided by ranked-choice voting.

That method, in which voters rank their candidates in order of preference rather than choosing just one, was opposed by 49% of those polled and supported by just 45%, the Spectrum News/Ipsos poll found.

“Now that Maine has been through it, there’s not an overarching consensus that ranked-choice voting is the way to go,” Newall said.