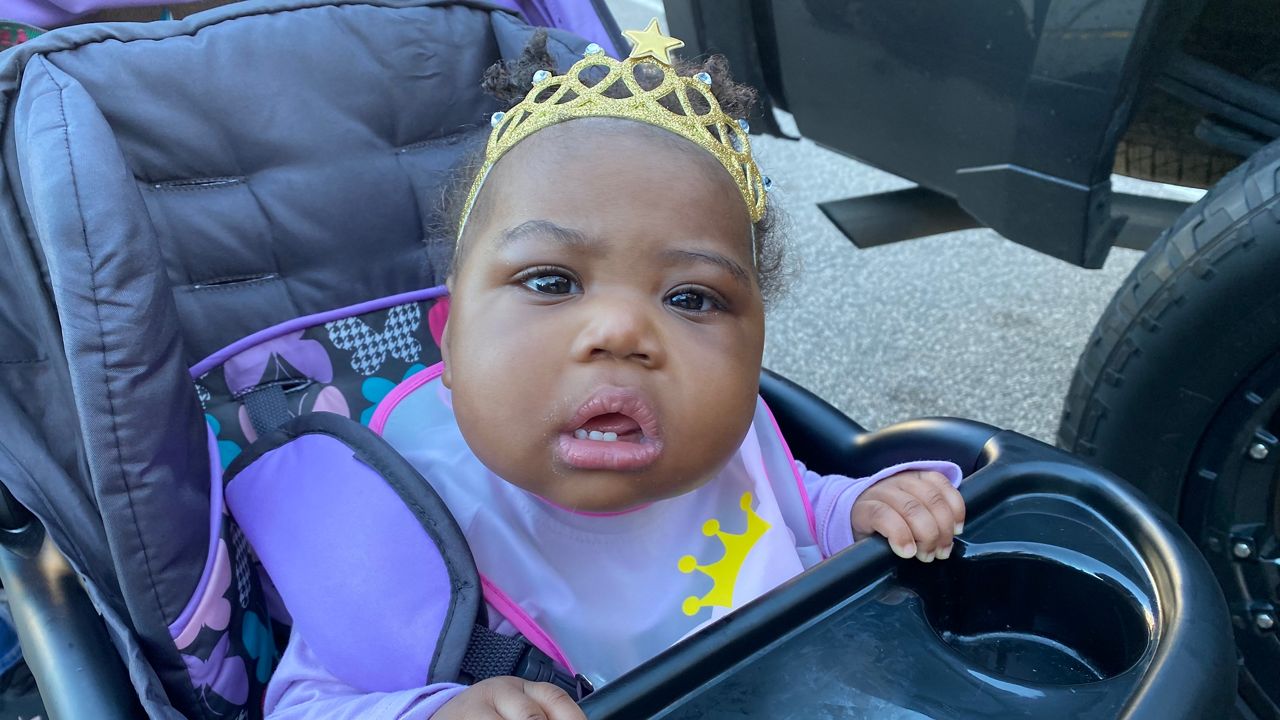 CHAPEL HILL, N.C. — A little girl is adjusting to her new heart two months after receiving it at the University of North Carolina Children’s Hospital.

The successful transplantation is only one part of Alaynah Frink’s health story. Before doctors replaced a failing heart with a healthy one, Frink’s family had to find a temporary solution: an artificial heart transplant.

The baby became the first recipient of a special artificial heart pump at UNC Children’s called a Berlin heart in January.

Her mother, Amber Hewett, said finding out a fix like this was available to young children was a game-changer.

Hewett said most of her daughter’s continuing care is to ensure her new heart is working.

The family learned a new heart was available on Aug. 5 and a day later the baby was in surgery.

A communications specialist confirmed the child was discharged on Sept. 20, after 253 days in the hospital.

2) The little one’s mom, Amber Hewett, is talking to us about their family’s medical journey. Waitlists for organ transplants can take months. Some people die during the wait. Hewett didn't take that chance. The choice she made saved their daughter's life. @SpecNews1RDU pic.twitter.com/4dSgyOToJB

Thursday morning before a biopsy, the mother and daughter were met outside the hospital by a nurse who cared for Alaynah during her extended stay in one of the medical units.

Hewett said the latest visit will allow doctors to determine whether her daughter’s body has accepted or rejected the new heart.

“I’m giving it an hour, maybe an hour and a half hopefully,” Hewett said.

She said all the cardiac muscles in her child’s body have responded well so far since the transplant and being discharged.

Alaynah was born Aug. 17, 2021. The next four to five months of her young life were full of issues. From coughing up formula to labored breathing, her mother said no doctor was able to pinpoint the core problem.

A warning sign was the infant’s inability to meet growth milestones. One medical diagnosis of asthma in December didn’t satisfy all of Hewett’s questions.

After a scary episode at their Brunswick County home in January, Alaynah Frink was rushed to Novant Health New Hanover Regional Medical Center.

There a battery of tests revealed severe heart failure.

She was taken by airlift to UNC Children’s in Chapel Hill. Specialists at UNC said they placed Alaynah on a medication regimen.

At 5 months old, Alaynah had an oversized heart too weak to pump blood to vital organs and the rest of her body effectively.

After doctors explored all possible medical avenues for treatment, a heart transplant was seen as the most viable option. But the option she most needed wasn’t readily available. Doctors said the baby’s heart was functioning at an alarmingly poor rate.

Experts who have worked in cardiac units at other medical systems say it can take longer than six months to receive an organ.

One in 17 people die waiting for an organ transplant, according to statistics from the U.S. Human Resources and Services Administration. The data shows every 9 minutes another person is added to the transplant waiting list.

The database of the Organ Procurement and Transplantation Network shows 3,366 candidates of any age across America are on the waiting list for a heart transplant.

Hewett didn’t want to take the risk of a long wait.

Hewett believes she made the right decision.