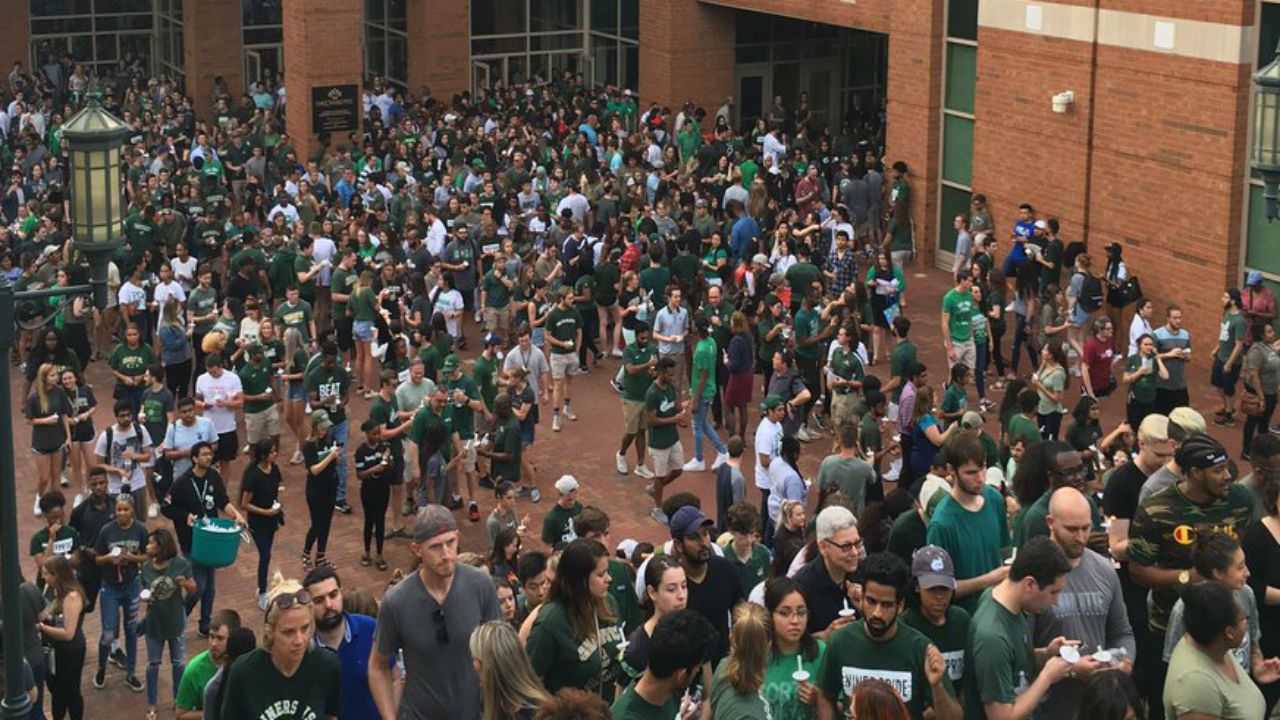 CHARLOTTE, N.C. -- Tuesday was supposed to be a day of celebration for UNC Charlotte students. It was the last day of class for the regular school year and a LDOC concert was planned.

However, the campus was faced with a tragedy as a former student shot and killed two other students and injured four. UNCC Chancellor Philip Dubois called it "the worst day in the history of UNC Charlotte."

Imagine having to leave class with your hand in the air, single file, led by police. UNC Charlotte won't be the same for these students. pic.twitter.com/qEMvaYJVNc

A candlelight vigil was held for 6 p.m. at Halton Arena at UNCC. The public was invited and everyone was asked to wear Niner Green.

Photo gallery of the vigil

The vigil was packed with students in the arena, with thousands in attendance.

Chancellor Phil Dubois spoke saying how proud he is to be the chancellor of the university. "We can't bring them back, but with your help we will find a way to remember them as 49ers."

The school's student body president also spoke, holding back tears at the thought of the incident happening on the campus.

Before heading to the Star Quad for the candlelight portion of the vigil, many in the audience sang the university's alma mater.

All university activities were canceled Tuesday night including a performance by rappers Waka Flocka Flame and Saweetie. The former tweeted he was safe and not near the scene of the shooting, while the latter posted her condolences on her Instagram story. Final exams are also canceled through Sunday. 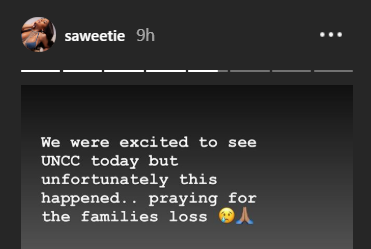 "I was shaking, I was scared. I was texting my mom and I was very brief. I just said there was a shooter, I think i'm safe, I love you," said Morgan Randleman, a UNCC junior.
“I thought it was just something minor happened but then I found out it was actually a shooting. I really thought that college was supposed to be safe for kids. It can happen again. I just don't know how I feel, said Shahida Vaidia, a parent.

Families of UNC Charlotte students are being sent to the Harris Teeter on University City Boulevard for reunification after a deadly shooting on campus pic.twitter.com/mEHdzfBukm

Gov. Cooper said that he knows the people in the community and knows they'll be here for each other. Mayor Vi Lyles tweeted, "We are in shock to learn of an active shooter situation on the campus of UNC Charlotte. My thoughts are with the families of those who lost their lives, those injured, the entire UNCC community and the courageous first responders who sprang into action to help others."

The university has confirmed that commencement will go on as schedule on May 11. The chancellor says counseling and spiritual support services are available to the entire campus community.

The shooting has gained national attention and response from elected officials around the country.

My heart goes out to the students, friends, and families of the victims of this tragedy and my thanks go out to the heroic first responders. When as a nation will we decide to act? #UNCC

I'm heartsick for the victims of the #UNCC shooting and their family, friends, and classmates. Schools should be a safe haven for students and faculty, but again we see a horrific act of violence on a school campus. Enough is enough.

Absolutely horrific news at #UNCC. Susan and I are grateful for the first responders at the scene and our thoughts are with the @unccharlotte community. https://t.co/DaEThuPb4O