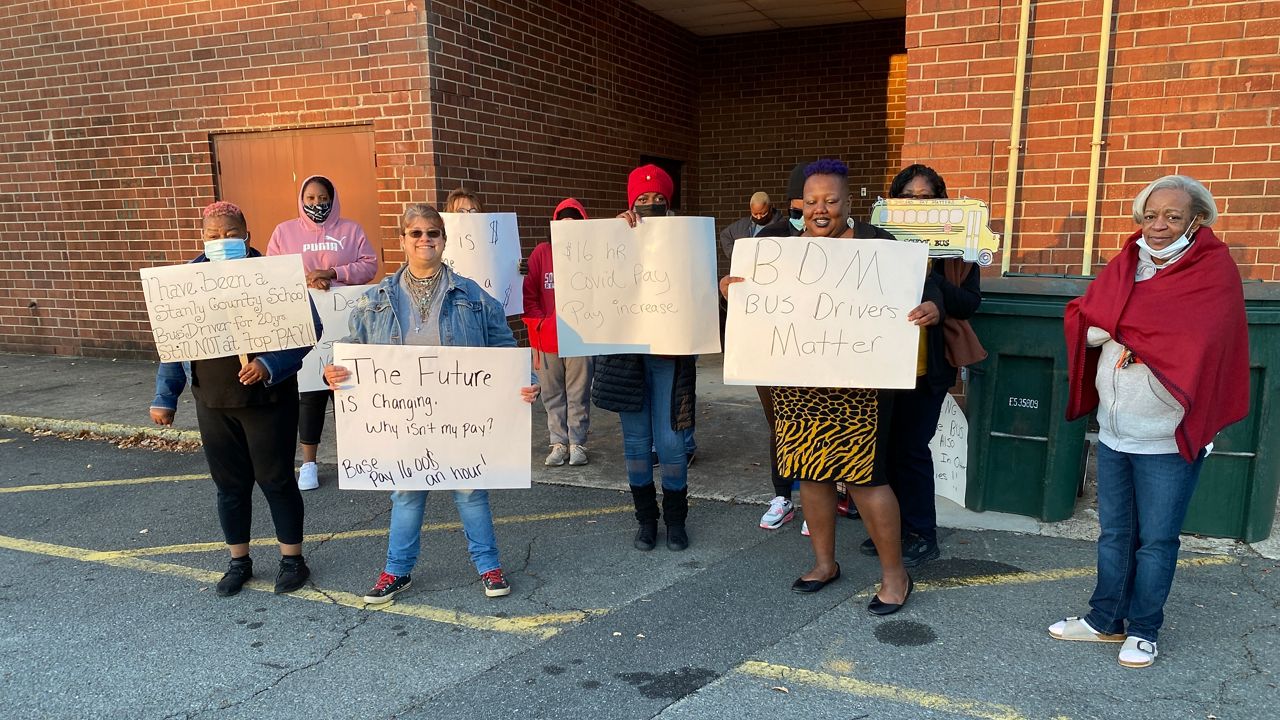 The group of about 15 is calling on the county to increase pay, and appreciation, for the school system’s classified workers.

Arriving at around 6:30 a.m. Monday, the group held signs which read “The future is changing, why isn’t my pay?”; “$16 hr COVID pay; pay increase,” and other messages.

Bus driver Kimberly Carpenter, who is in her 23rd year driving for Stanly County schools, explained the protest simply.

“Stanly County Schools do not want to pay their classified employees what they deserve,” Carpenter said outside the county offices while holding her sign.

Carpenter, who said she originally started driving as a stay-at-home mom to make extra money, said the salaries have been frozen for four years.

“We were promised a pay raise and a COVID bonus per Governor Cooper. And, we haven’t seen it in Stanly County,” Carpenter claimed.

As the sun came up, Carpenter and her co-workers made sure their voices were heard as school officials arrived at the county office.

“We need a raise!” they shouted as various school officials arrived for the day.

Elsewhere in the county, buses usually manned by Carpenter and her co-workers were left unattended, as the schools, parents and students figured out how to get to class with the drivers absent.

“I’m sorry. I hate it. I really do. Because, I do worry about getting my kids to school on time. And I do worry about picking them up and getting them home at a decent hour. But, if the county wants to make this about the kids, then they need to take care of the workers that care about the kids,” Carpenter said in a message to inconvenienced parents and students.

Other bus drivers at the protest, like Ashley Garner, said she likes her job, but the protest is important.

“I enjoy it, because I have four kids of my own, and I enjoy seeing my neighbors, and seeing the community, grow from kindergarten on up,” Garner said with a smile.

The drivers are calling for an increase in base salary from $13.07 to $16.00 per hour. Repeatedly, they said the increases would help other classified workers like custodians and cafeteria workers, which Carpenter said she was hopeful would participate in the protest.

Besides salaries, Garner said she wanted bus monitors to be required on all county school buses.

Outside Stanly County, other area school systems have implemented similar raises. This fall, Charlotte-Mecklenburg Schools and Union County Public Schools both increased salaries for drivers by $2 to $3, with both counties paying more than $16 per hour.

UCPS' Board of Education approved the recommended raises for bus drivers, and nutrition staff.

The district has openings in both areas and is actively trying to hire.

Garner, who lives three miles from a Stanly school and has driven buses off and on for 13 years, said she wants to remain in the county with her children’s schools. Carpenter said they would consider continuing the protests if their demands were not met in the immediate future.

Spectrum News One asked Stanly County Schools how it handled the absent drivers’ routes on Monday, if it plans on increasing driver, custodian and cafeteria pay, as well as handling other demands the protesters made. An attempt to speak with county officials in-person on Monday was unsuccessful. This story will be updated when the county responds.