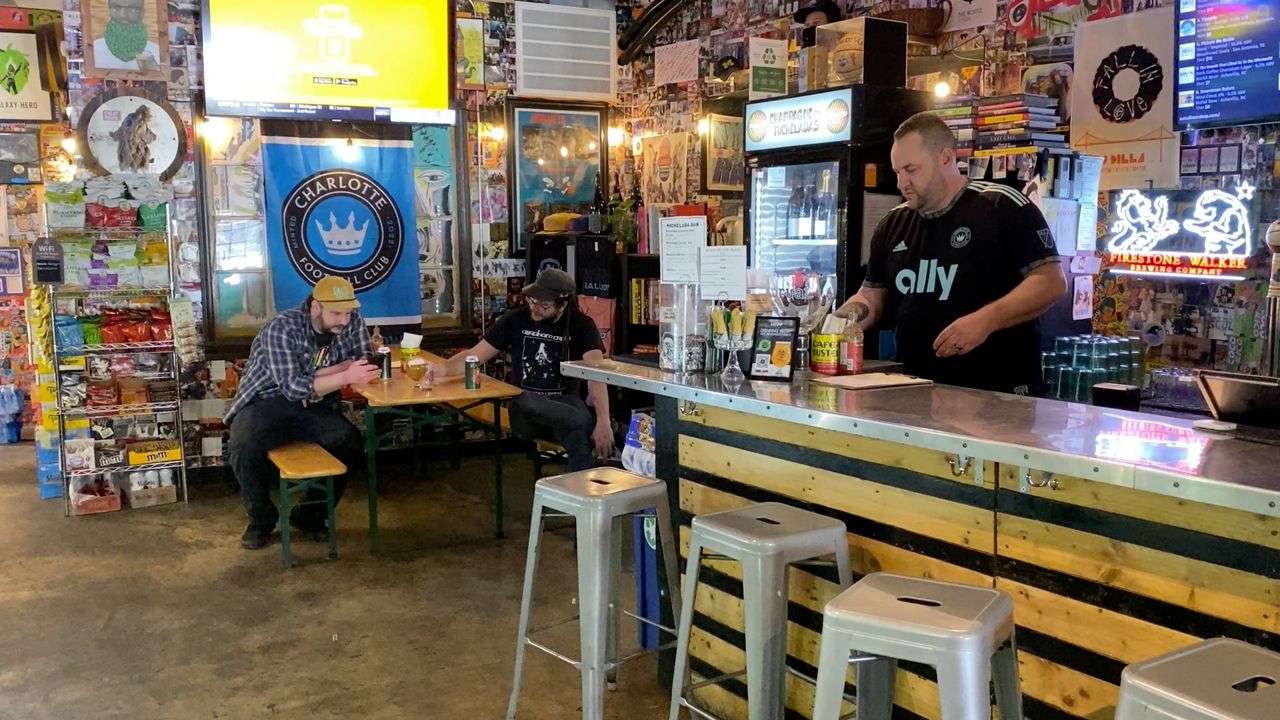 CHARLOTTE, N.C. — Charlotte’s bars and restaurants are ready for the city’s newest professional sports team to take the pitch, and generate good business.

“It’s like almost like that Christmas morning feeling when you’re ready to open some presents, it’s hard to explain cause again, it’s been so long since we had a brand new team,” said Jason Glunt.

Glunt is the co-owner of Salud Beer Shop and Salud Cerveceria in Charlotte’s NoDa neighborhood. He said the crowd for Charlotte FC’s first away game in late February surprised him.

“We had no idea how many people were going to show up, this was our first time, it was an amazing turnout, amazing experience. Great sense of community. It was completely packed up here, packed downstairs,” Glunt said.

Salud is one of the watch bars for one of Charlotte FC’s fan clubs, the Mint City Collective, of which Glunt is a member.

“You’ll see by the front window we have the original Mint City Collective scarf,” Glunt said, showing off his memorabilia.

Glunt was wearing one of Charlotte FC’s new jerseys, or kits, and said he was ready to finally see professional soccer in Charlotte.

“It’s been a process, man, it’s been about two years, so we’re really really excited to finally see them in action and get it rolling,” Glunt said, reminiscing on his support of the city’s newest franchise.

But his soccer fandom is relatively new, starting along with the COVID-19 pandemic, when he had a new baby at home.

“I’ll be at home with my newborn son, and you wake up at 7:30 [a.m.] and there wasn’t much sports on, and we’d watch soccer together. I picked my European team, and we kind of went from there,” Glunt said, saying he chose the Premier League team Chelsea as his European club.

His personal passion bled to the business as Salud started showing every soccer game it could during business hours, including Charlotte FC. Glunt said the city has a similar energy to when the Hornets and Panthers first came to town, which he hopes is good for business.

“I mean we’re going through kegs almost like double what we do sometimes on a normal, regular Saturday. So, it’s been great already and it’s only been one match,” he added.

Overall, Glunt said Charlotte adding yet another professional sports franchise will help businesses around the city, particularly bars like his.

“Any sporting events the city brings, it’s great for business,” Glunt said, whether they range from Hornets games to college football.

And, he was already coming up with ideas to capitalize on professional soccer.

“What we plan to do is, for all the home games, meet up here early, get a little group together of Mint City NoDa people, get on the train together, and then hit either Mint City tailgate or other bars Uptown. Then, march to the arena — or the stadium. And I think, it’s great for us and bars Uptown. It’s kind of a way for us to connect that maybe we couldn’t before. I think with the light rail being here in NoDa, it’s huge for us,” Glunt said about his plans for Saturday afternoon.

Meanwhile in Uptown, just a short walk from the stadium, Angelo Tsepelis at The French Quarter restaurant said soccer fans are already here to stay.

“For two-and-a-half hours, almost three hours straight, we were — this whole area, every bar and restaurant was pretty much crowded to the brink, to where I couldn’t let people in anymore,” Tsepelis said about the crowd for Charlotte FC’s first away game last week.

Tsepelis said The French Quarter, and its neighbors, are already a soccer fan hangout, and the newest team here in Charlotte will only help.

“We’ll see more crowds coming in, and we need to build that business that we lost the past couple years with COVID. But, I think it’s going to be awesome because it’ll bring more people to the city, you know?” Tsepelis said behind the bar this week.

He said a weekend soccer crowd’s business can make the whole week, and they’re ready to welcome a new team to Charlotte’s sports on Saturday night.