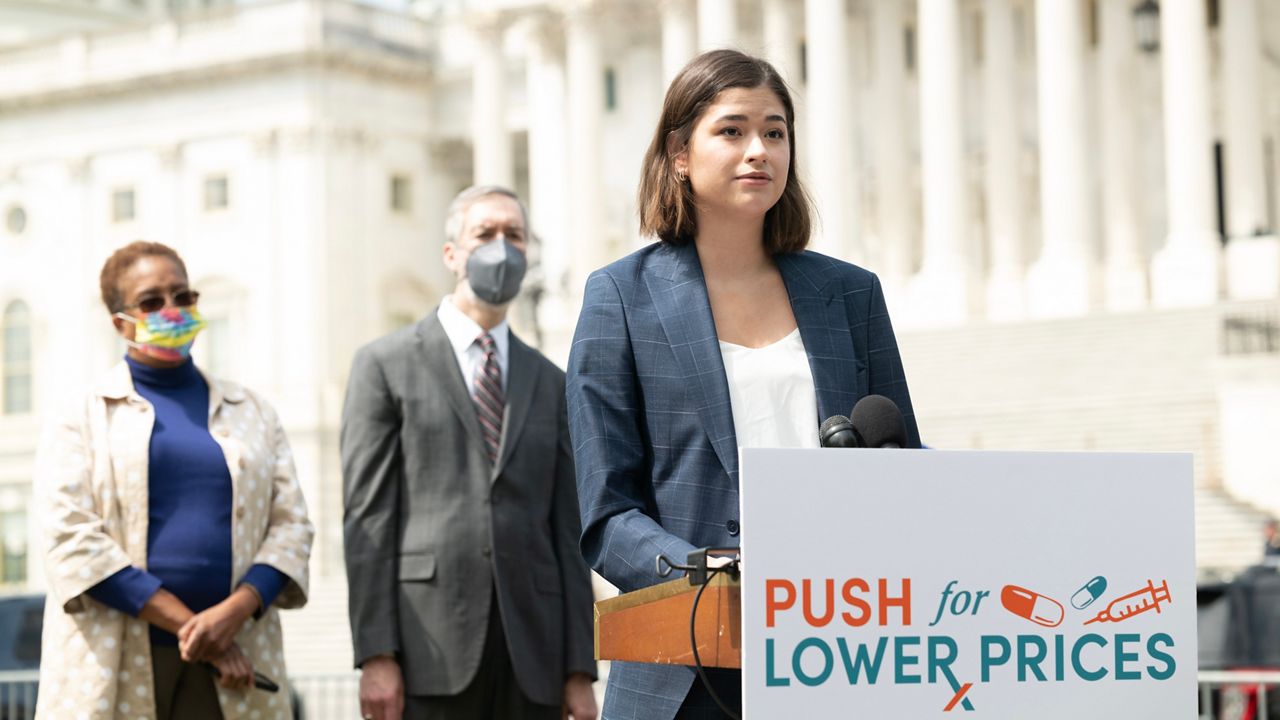 Jacqueline Garibay in Washington, D.C. (Courtesy of Cheriss May for AARP)

AUSTIN, Texas — Jacqueline Garibay has ankylosing spondylitis (AS). The condition causes joint pain and, in extreme conditions, can make the spine’s vertebrae fuse together.

To manage pain and keep her condition from getting worse, Garibay gets one shot of medication a month. But at the beginning of this year, she skipped four months’ worth because it was too expensive.

“It was difficult for me to justify paying $4,000 a month, almost, for a medication,” Garibay said.

In early May, Garibay paid the price. Her medication not only relieves pain but also prevents her condition from getting worse.

She said she’s always looking for medical assistance, vouchers and coupons to lower the cost of her shots. She said she even delayed school at George Washington University in Washington, D.C. to help her family save money.

“It really feels like it’s extreme couponing, but with my life,” she said. “It’s not like I did anything to make me sick. It’s not like I took a willing risk, and I ended up being sick because of it. And it’s not like it’s anything I could have changed.”

In early 2020, Garibay was training for her first marathon and was experiencing joint pain. She went to the doctor and was tested for the HLA-B27 gene, which can be an indicator of AS In May of that year, her doctor diagnosed her with the condition. She knew what to expect, because her aunt has AS too.

“My aunt actually hasn’t been able to walk since her 40s,” Garibay said.

Stories like this are common. That’s why Rep. Colin Allred, D-Dallas, is fighting to lower drug costs in America. He says the pharmaceutical lobby is part of the reason Congress has not signed bills to keep prices down into law.

“The pharmaceutical industry has a lot of power in Washington,” Rep. Allred said. “They do a lot of lobbying in Washington. They support a lot of folks who are in office here. And that clearly has had an influence… I think when you see folks having common sense ideas that are unable to become law, you have to ask, ‘What are the reasons why this hasn’t happened?’ And in my opinion, part of it is that we have kind of some undue influence going on here that’s preventing, I think, us from passing this critical legislation.”

In order to pass laws to lower drug prices, Allred says we need to “get money out of our politics.”

“We have to demand from our elected officials that they serve us instead of any special interests,” he said. “We have to be able to have honest conversations about campaign finance reform and why we need to do that.”

Texans are paying a lot more money for medication than people in other countries.

“We’re paying 3, 4, 5 times as much in the United States for the same drugs that you can get in Canada or Australia or the U.K. for… a fraction of the cost,” Rep. Allred said. “And we’re also the country developing those drugs. And oftentimes, you as a taxpayer are part of the development of that drug through grants that we’ve given to try and encourage research into those areas.”

This issue is personal to the Representative. His mother is a breast cancer survivor.

“I know what it’s like to get that call, when someone says ‘it’s cancer,’” he said. “You may have a procedure done, but you’re also going to have to rely on taking a drug for the rest of your life, and the concern that comes along with that, like whether or not you’re going to be able to afford it.”

Rep. Allred said he’s beginning this fight to lower drug costs by trying to cap the price of insulin at $35 for a month’s supply. A bill passed the house, and he’s hoping the senate will support it as well. He also wants to give Medicare the ability to negotiate drug prices.

“We know there are diabetics across the country and here in Texas that are having to ration their insulin,” he said. “One in four diabetics in America is doing that. And we use the word ‘rationing,’ but we really should call it something else, which is that they’re not able to take the medication that they need to survive because they can’t afford it. And that’s really unacceptable. I think that every Texan, every American, should be able to get the drugs they need to survive.”

Garibay is also passionate about lowering drug prices. She’s involved with Patients For Affordable Drugs Now (P4AD). She found out about the organization through a club on her college campus, Chronic Health Advocates. Garibay has been in a commercial for P4AD, and even spoke before the House Oversight Committee about the issue.

Garibay is fighting for herself, and other people, who will always need specialized medication.