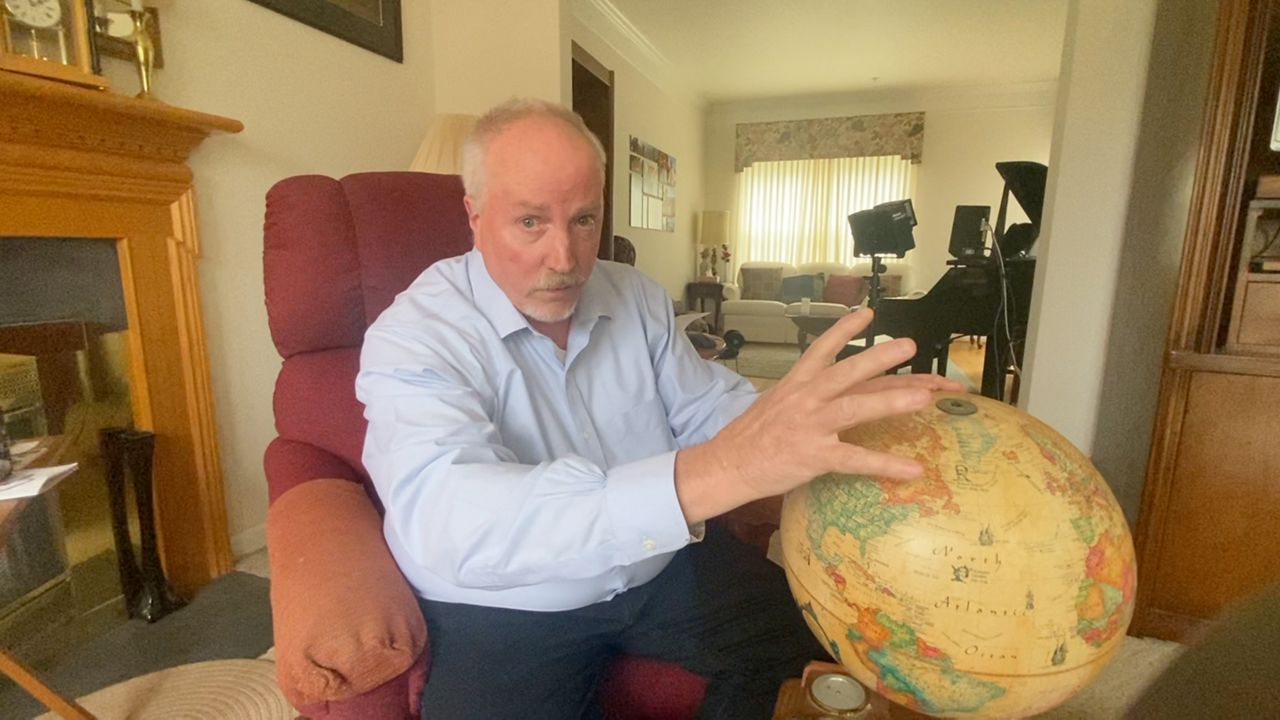 Rocky Lopes, co-chair of the Tsunami Science and Technology Advisory Panel, shows where each of the tsunami warning centers are on the globe from his home in Maryland. (Spectrum News/Samantha-Jo Roth)

In a recent report, the Tsunami Science and Technology Advisory Panel found the system is operating with delayed alerts, outdated software and poor communication to the public.

Panel co-chair Rocky Lopes said he knows firsthand what can happen when a Tsunami strikes without warning. Lopes helped coordinate the disaster response to the 2004 Indian Ocean Tsunami for the Red Cross, which killed 230,000 people.

“I had the opportunity to go on shore in Indonesia and see directly for myself how a tsunami that is not warned, what it can do when there are many people, it impacted 16 countries,” Lopes said during an interview with Spectrum News at his home in Maryland. “People were out enjoying their lives, swimming in the ocean and fishing when this massive tsunami came on shore very quickly."

The panel Lopes serves on is urging the National Oceanic and Atmospheric Administration (NOAA) to overhaul the nation's tsunami warning system.

Their report found issues that include delayed communication of warnings, outdated technology and lack of coordination between warning centers in Alaska and Hawaii.

Some of the problems were highlighted in January when a volcano erupted beneath the South Pacific, triggering a tsunami that swamped Tonga and even caused damage in California.

The advisory system is designed to warn of tsunamis caused by earthquakes, not underwater volcanoes.

“They did not have the monitoring in place to be able to use the system to actually detect and forecast for that actual event," said Corina Allen, a member of the panel and geologist with the Washington Geological Survey. "That highlighted this need for better monitoring evaluation and forecasting for non-earthquake Tsunami sources.”

Allen said timely alerts are critical for places like Washington State. A big earthquake along the Cascadia fault offshore could unleash a huge wall of water.

“Today, if it happened, we do expect there would be significant loss of life because we don’t have the evacuation solutions for the people living on our coast,” she said.

Allen noted the community needs more vertical evacuation structures, since many of those living on peninsulas would not have enough time to evacuate if a major tsunami hit. She also worries about how wireless alerts would be issued in the case of a seismic disaster.

"There isn’t the granularity necessary to be able to alert different parts of a state or a coastline, with the release of the earthquake early warning system and tsunami alert system,” she said. "Those two are closely integrated when it comes to an earthquake and a tsunami.

"There hasn’t been sufficient testing of the wireless emergency alert system to disseminate both messages in such an event. I worry that there will be conflicting messages and limited bandwidth."

The NOAA Administrator has until January of next year to respond to the recommended changes. Experts say the updates are going to require a significant amount of funding to keep up with technology and new challenges.

Until then, they hope NOAA will be able to implement changes before a major disaster strikes.

“We could have a major Cascadia earthquake that could cause significant damage and a Tsunami very rapidly," Lopes said. "I do worry about that — it will be very devastating.

"I think we can reduce the potential for devastation by being better prepared.”