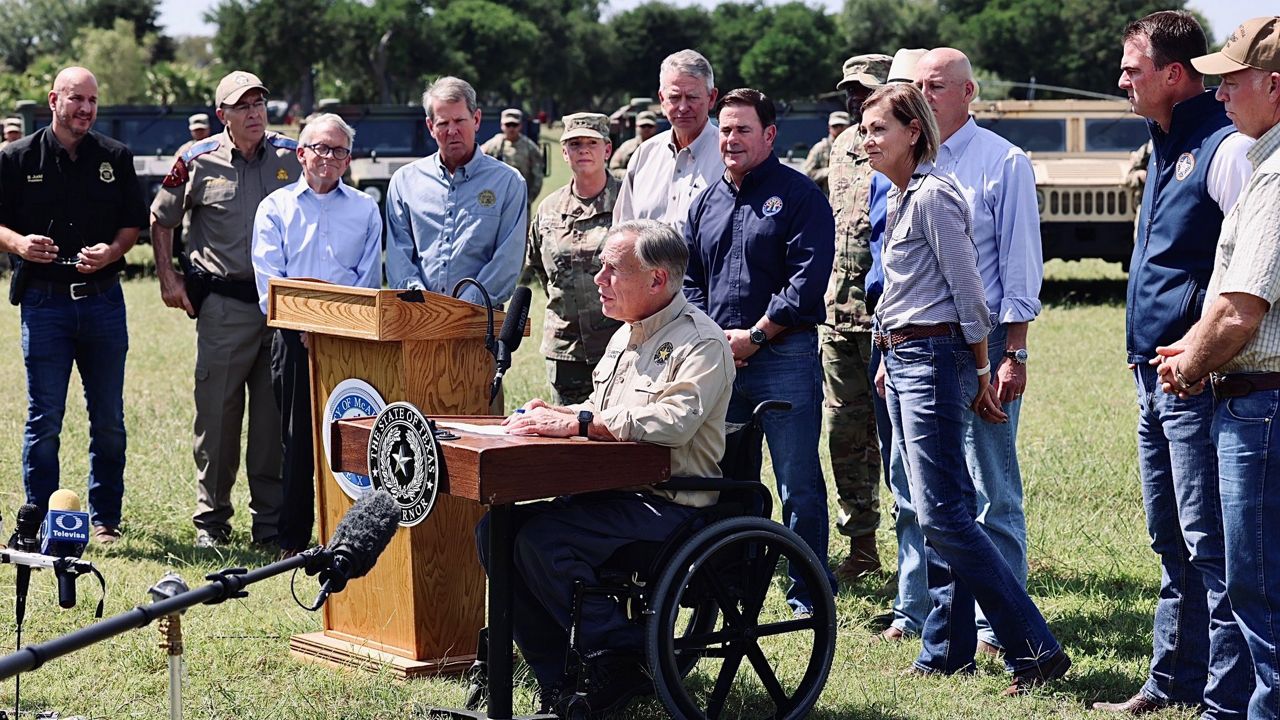 Texas Gov. Greg Abbott holds a news conference with nine other Republican governors in Mission, Texas, in this image from Oct. 6, 2021. (Office of Gov. Greg Abbot)

MISSION, Texas — While attention on Wednesday turned to a school shooting in Arlington, Texas, that injured four people, Gov. Greg Abbott, appearing with nine other Republican governors at the Texas-Mexico border, detailed a 10-point plan he said “President Biden can take to end the crisis.”

The plan is comprised of the following:

“Together, we are sending a strong message to the Biden administration that we will not tolerate their refusal to secure the border — and we will continue to do whatever it takes to keep our communities safe,” Abbott said.

The news conference, held in Mission, Texas, came as there is word of a Haitian migrant caravan that may be making its way to Texas soon and could include up to 60,000 people.

Texas has thousands of National Guard & Texas Dept. of Public Safety personnel deployed at the border.

$3B has been allocated for border security efforts, including building a border wall.

Texas is stopping it. pic.twitter.com/Jb80YrII6I

Despite the governor’s criticisms, the vast majority of migrants attempting to cross the border into Texas are being turned away.

The U.S. last month undertook a massive effort to return Haitian migrants from a camp located in Del Rio, Texas. It’s estimated roughly 14,000 migrants were gathered there at one point.

“We are here today to shine a light on what is going on here at the southern border and how it is impacting all of our states not just the state of Texas,” he said.

Officials with the Democratic National Committee called the visit a "political stunt."

“The Republican governors taking their political field trip to the U.S.-Mexico border are the same ones who stood idly by as Donald Trump spent four years destroying our immigration system and spreading vile, xenophobic rhetoric," DNC spokesperson Adonna Biel said in a statement. "If Republican governors want to make a statement about the border, maybe they can call on their Republican members of Congress to join President Biden and Democrats in working to rebuild and improve our immigration system instead of flying thousands of miles for a stunt designed to further their own political aspirations.”

Meanwhile, in Washington, Senate Republicans made similar demands to reinstate Trump-era policies, such as construction of the border wall and reinstatement of the Migrant Protection Protocols, the program requiring asylum seekers to remain in Mexico.

“This is a humanitarian crisis. It's a public health crisis. It's a national security crisis. And right now Joe Biden and Kamala Harris refuse to do a damn thing about it," said Sen. Ted Cruz, R-Texas, alongside his GOP colleagues.

Edna Yang supports immigrants through the Texas-based nonprofit American Gateways. While the legality of the so-called "Remain in Mexico" policy remains in question, she believes it has not been effective in deterring people from coming to the U.S.

“It has denied people access to the justice system. It has set up horrific and horrendous standards of living and conditions for people who are fleeing persecution and harm," Yang told Capital Tonight. "It created a situation that helped to increase the backlog that we see in the courts, and increase some of the problems that we've seen at the border."

Republicans have been pushing to address the immediate safety needs on the border, as they tie the increase in fentanyl overdoses across the country to the situation. But, the Biden administration and other Democrats criticize those on the other side of the political aisle for not collaborating on potential laws to change the immigration system, as a whole.

“Access to a good immigration system that allows for people to apply for the benefits that they should be getting, and also border security all go hand in hand," Yang said. "We can't have one without the other.”