An interpreter bridges the language barrier during a security construction project in Tikrit, Iraq in 2006. (Department of Defense photo by Capt. Amy Bishop)

For the three years that Amjad Abduljabar worked as an interpreter for the U.S. military, not even his family knew where he went when he left Baghdad each month.

He used Photoshop to create a fake ID that made it look like he worked for an internet company in northern Iraq, just in case anyone questioned him.

“You’ll be asked the question, and you cannot answer it. There’s no good answer for it,” Abduljabar said. “Every person has to come [up] with his own story."

Like the thousands of interpreters, advisers, engineers, and other Iraqis who chose to serve alongside U.S. soldiers starting in the early 2000s, militia groups were likely to target him for his job, deeming him a traitor. Many others like him have been killed for it.

Now, citing a security breach, the Biden administration has suspended the visa program meant to provide Iraqi allies with a path to safety in the US, a pathway that already languished under former president Donald Trump.

Abduljabar, who made it to the U.S. under a different program in 2014, has friends who are some of the tens of thousands still waiting for a visa — in hiding — fearful that someone will find out about their work for the U.S. years ago.

Meanwhile, the channel meant to bring them to safety has slowed to a trickle. 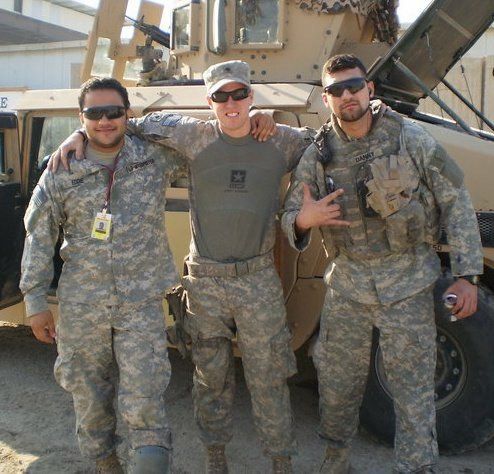 Amjad Abduljabar (right) pictured with U.S. soldier Peter Farley and another interpreter at the Camp Rustamiyah military base in Iraq.

A Promise of Safety, Broken

The Direct Access Program is meant to prioritize Iraqi allies for admission under the larger refugee program, which President Trump slashed to its lowest admissions goal in history in 2020.

In Trump’s first full year, the number of visas granted for Iraqi interpreters and their families dropped 98 percent, despite the thousands of people in the backlog and bipartisan support for getting them to safety.

Then in late January, the State Department announced its suspension, which is set to last 90 days. In a statement, Acting Secretary of State Daniel Smith said the pause would be used to  "address vulnerabilities" after former employees were charged with stealing government records related to the program for Iraqis.

“I think hearing this news, it was just — I felt somewhat of a heavy heart,” said Betsy Fisher, Director of Strategy at the International Refugee Assistance Project.

“We have a huge backlog of people, many of whom are facing urgent risk. And this is just another delay that they're facing.”

Interpreters are considered essential to U.S. combat operations on the ground. In 2018, Defense Secretary Jim Mattis wrote a letter to President Trump urging him to support Iraqi allies, despite other restrictions on immigration.

“A failure to honor our commitments to those who have supported the U.S. in combat would undermine our diplomatic and military efforts abroad,” Mattis wrote. 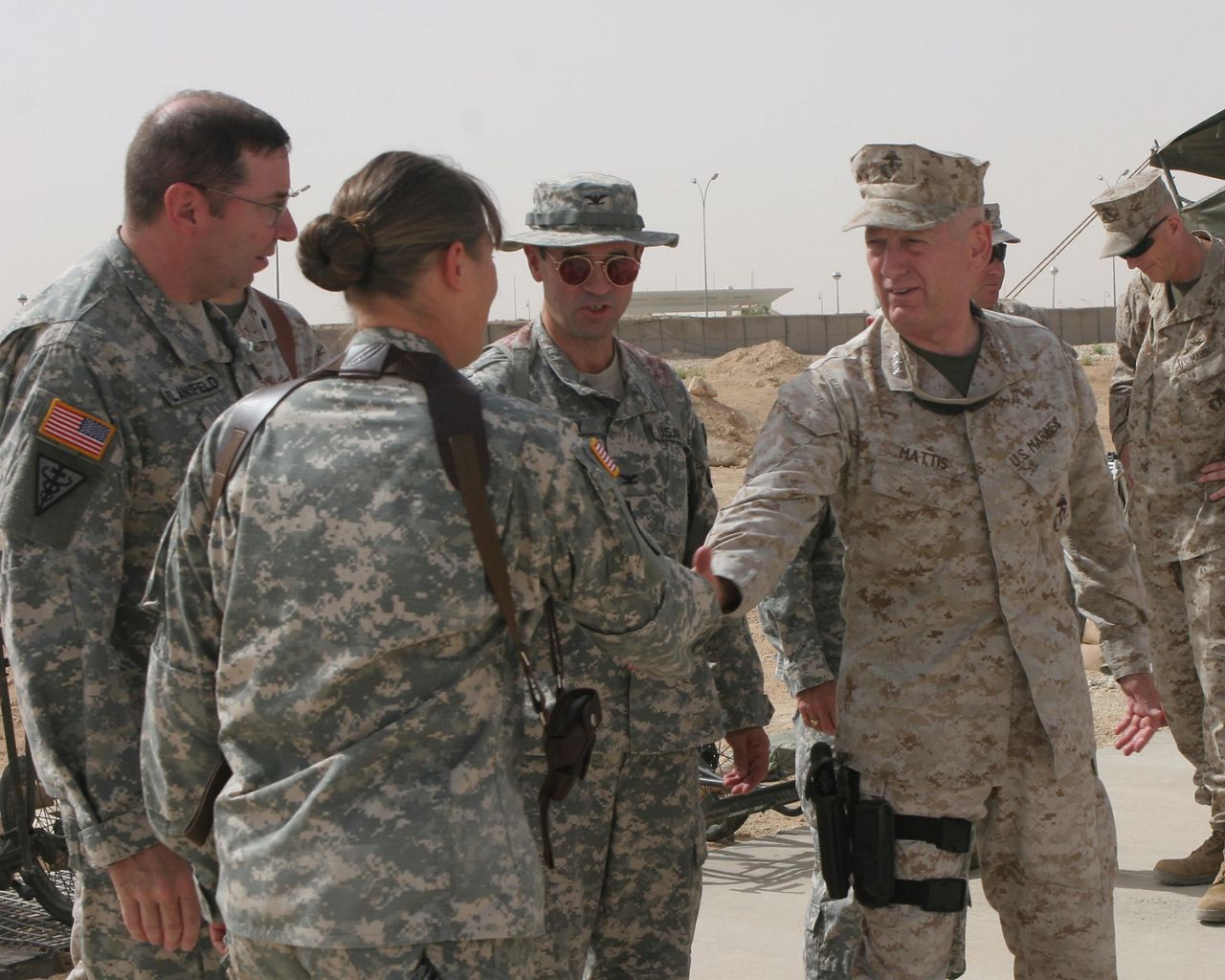 Lt. Gen. James Mattis meets with soldiers at Al Asad Air Base in Iraq in 2007. (Department of Defense photo by Sgt. Sheila Brooks)

Both Republican and Democratic lawmakers have formally called on the State Department to address issues with the program for Iraqis and a separate visa allowance set aside for Afghan allies. They include current Reps. Michael Waltz (R-FL) and Adam Kinzinger (R-IL), both veterans, who each penned op-eds about the programs in recent years.

“Everybody that was with me in my convoy – for three years and a half – they went home safe,” Abduljabar said, remembering his time serving alongside U.S. soldiers.

“We were part of the team," he added. "And whatever it takes, you know, you have to finish it. It's our mission.”

Abduljabar said he and other interpreters were seen as fellow soldiers, and they built a brotherhood with U.S. service members on the base where they lived, near Baghdad.

“We live together … we sit together, we actually share news about their families,” he said. “We used to live as soldiers. Now we’re all in this together.” 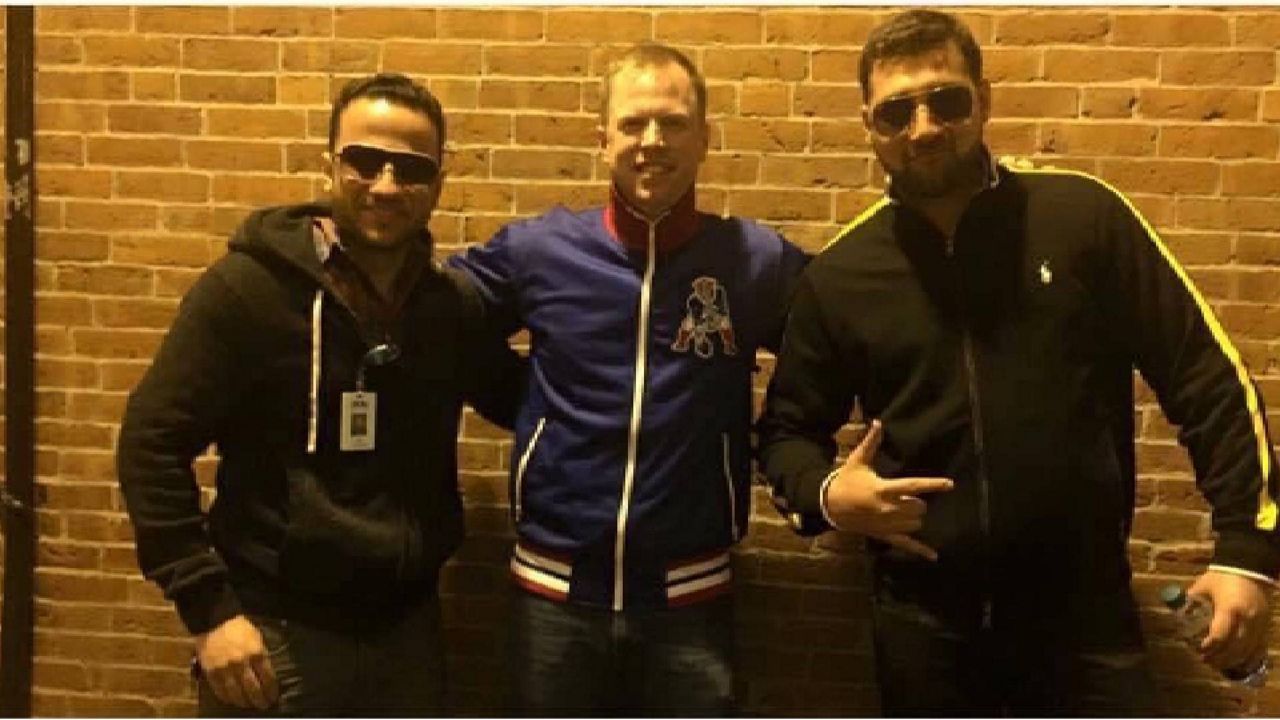 Abduljabar recreates a photo with Farley and another interpreter in Boston.

Prior to President Trump, the U.S. admitted thousands of interpreters each year, though the number was gradually declining under President Obama. In 2016, about 5,000 were granted visas, followed by about 3,000 in 2017.

While the State Department has not released information on how many Iraqi allies and their families are waiting in the Direct Access Program, some estimates put the number at more than 100,000.

"Suspending this program is not a decision we take lightly, but it is necessary to ensure its integrity," a State Department spokesperson told Spectrum News Monday. “We will be working as quickly as possible to complete our review and implement any additional safeguards to resume processing as soon as practical."

The program is paused while the Department of Justice pursues a case against three foreign nationals for stealing sensitive records from the Direct Access Program, including information about applicants’ family and military history. The case also includes charges of money laundering.

"Those who would seek to take advantage of America’s generosity in welcoming the most vulnerable people will be held accountable," the State Department spokesperson said.

Department officials have consistently reiterated support for U.S. military allies and their visa programs, but their words haven’t been matched with action.

In fiscal year 2020, the administration specifically set aside 4,000 spots for Iraqi allies under the refugee program – 20 percent of the entire admissions goal – in a show of acknowledgment. They admitted 161.

"This program is essentially a parking lot," Fisher said. 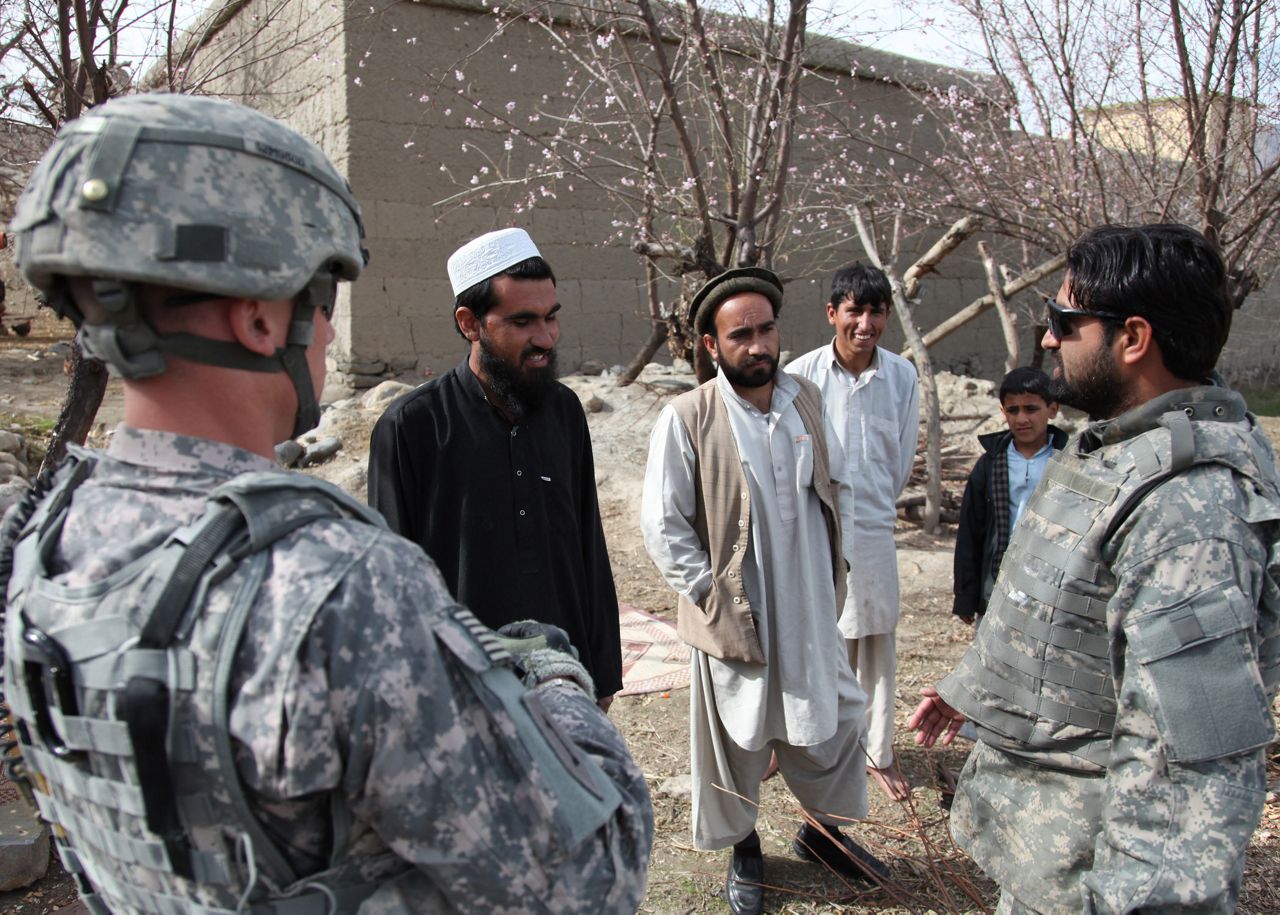 Hope for the Future?

Fisher’s colleagues at IRAP released a report last year revealing details about the "extreme vetting" the Trump administration implemented that slowed the processing of refugees, including Iraqi interpreters and their families. Historically, Iraqi and Afghan allies have been some of the most securely-vetted immigrants due to their previous work for the U.S.

The separate program for Afghan interpreters, which includes visas allocated by Congress each year, has also faced issues. Many of them have waited years for approval, despite a mandate from Congress that the process take no more than nine months.

“Wearing the uniform ... it’s not easy,” Abduljabar said. “I just did it because I always try to do the bigger thing.”

Abduljabar now lives with his wife and two daughters in Houston, where he said he feels safe. But he’s hopeful the U.S. will fulfill its promise to his friends who are still waiting.

“I trust the people I served with with my life, so I have to trust them [now],” he said. “We can, you know, finish the last step of that creed, that we haven't left anybody behind.”

President Biden has proposed raising the refugee admissions cap to 125,000, more than eight times the low goal set by President Trump last year. That could signal new hope for the Iraqi program.

But advocates say a higher number also has to be met with measures to improve processing and rebuild the infrastructure of the refugee program, which shrank under Trump.

“Then we'll be looking for the execution,” Fisher said. “We're hopeful that there will be political energy but also then the will to implement the changes.”