DENTON, Texas — Julie Glover dials yet another health care provider's number and immediately on the other end of the phone comes one of the messages she’s quickly become very familiar with.

“[We’re] only able to offer the vaccine to those in 1A,” said a recorded voice on the other end.

“It just, it has been frustrating,” said Glover, hanging up the phone and putting it down next to her laptop where she searches for other possible vaccination sites. “Chasing unicorns - trying to find a vaccine.”

Glover, Denton’s former Downtown Economic Development director, retired in late 2019 and expected to begin traveling and enjoying her time alongside her husband. Then came COVID-19, and the duo, with preexisting conditions in their household, have been forced to isolate in their home since last spring. 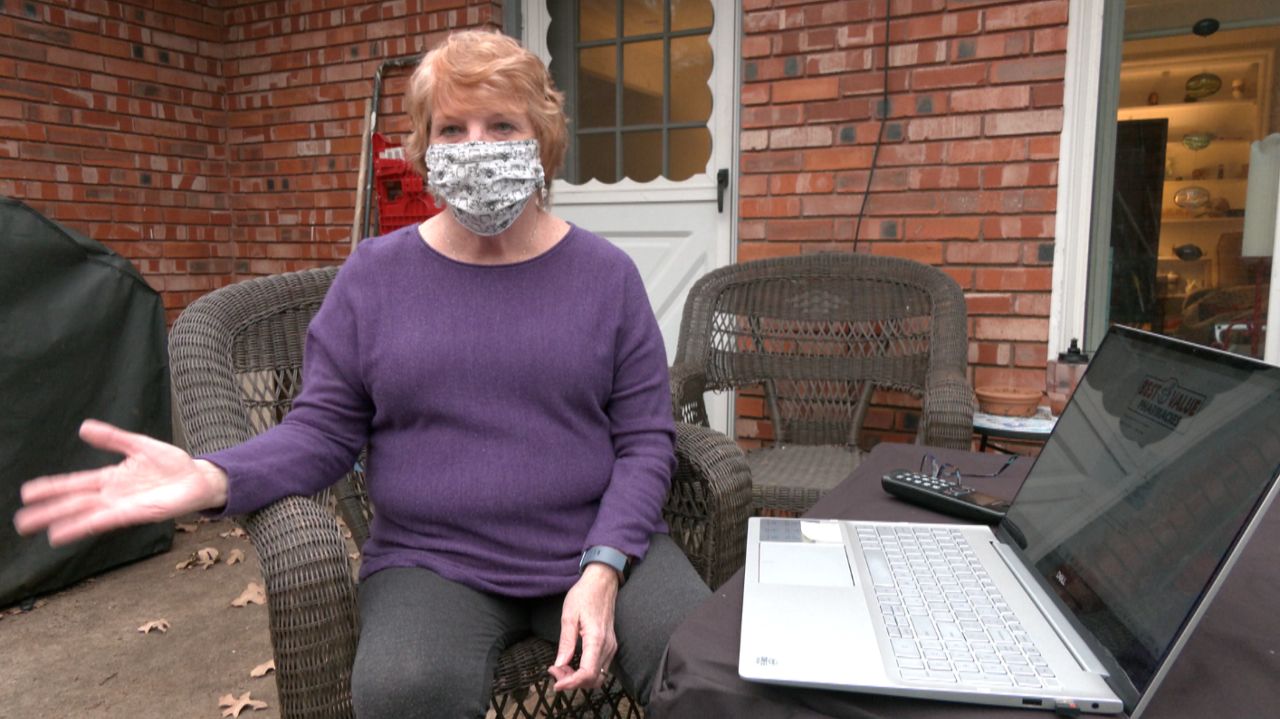 Denton resident Julie Glover sits by her computer explaining how she could not find availability for COVID-19 vaccine. (Spectrum News 1)

“Let’s just get this over with. I’ve been in my house since March and I’m ready to do something different,” said Glover, searching another pharmacy’s website for information.

Recently, it looked like hope was on the horizon for the couple to get back to regular life as, with the COVID-19 vaccine rollout and both of them in Phase 1B, which the state opened up to get the vaccine in the last few weeks.

It has not been the simple shot in the arm they hoped it would be, though.

“Last week, I called everyone that’s on the list,” said Glover.

She said every vaccine provider has had one of two responses for her: they’re out of vaccine or they weren’t ready for the state to open up the 1B category and are still only offering to 1A patients (health care providers and first responders).

Glover quickly exhausted all of the options in Denton, then in Denton County, and now she’s expanded her search to pharmacies 45 minutes away and farther in neighboring counties.

“Got the hot call this afternoon with a hot tip they’d gotten the vaccine in Decatur,” she said. However, that tip yielded another provider who was fresh out of doses.

Like many in her category throughout the state, Glover says she and other 1Bs she knows locally have formed a sort-of search party for the vaccine. Each person is making calls to different providers and reporting back potential sites where all of them can get their shots, but Glover said usually they’ll follow a tip only to discover yet another provider who’s run out of supply before they arrive.

Not far away in another Dallas suburb, Carri Craver has been on the same search to find a vaccine for her dad. She too has formed the search party with other 1Bs, and she too has had just about the same luck.

With some web design knowledge, Craver decided to expand her search party by starting up a website called COVID 19 Vaccine TX. The site allows people to crowdsource vaccine leads with users updating daily where they’ve had success finding a shot and who’s run out.

“I think I’ve gotten a little over 100 reports have been added,” said Craver. “Hopefully it can just be a source for current information, and that’s the best we can do at this point until they start just having the shots falls from the sky."

The 1A, 1B issues aside, vaccine supply is a continuous roadblock nationwide. Government officials and the actual vaccine manufacturers continue to make efforts to increase the output of doses and get more doses to areas that need it. Additionally, more manufacturers approach approval of their versions of the vaccine, and communities continue to open up more mass-vaccination spaces to get as many people covered with the shot as they can, as many as they have doses for, at least.

Likely, it’s all going to take time, though. The search for the vaccine may just be a frustrating part of the process for a while.

Glover and her husband can now provide some hope to others on that search. After about two weeks of looking and following up on leads, Glover reports that they both were able to get appointments and got their first doses of the vaccine at a local clinic.

Now, they’ve just got to get dose number two. Two more people through the long, long line for that COVID-19 safety.