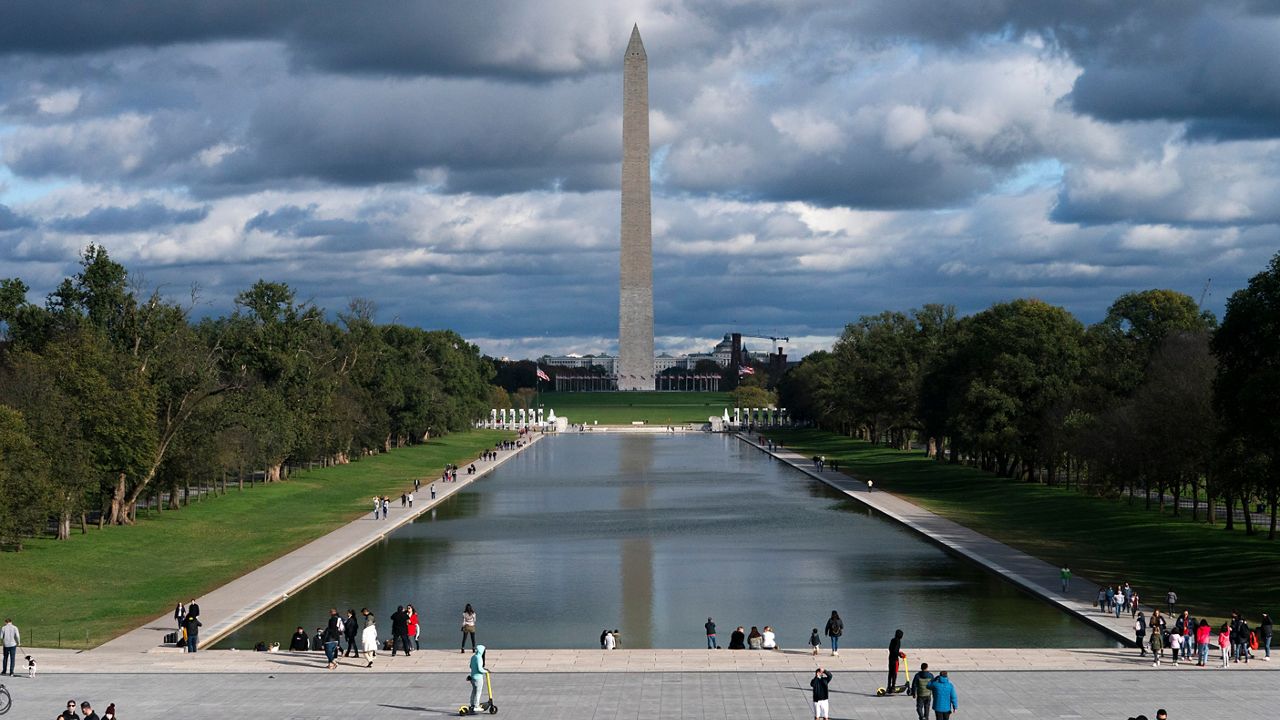 The Washington Monument is seen from the Lincoln Memorial, Friday, Oct. 30, 2020, as people visit the National Mall in Washington. (AP Photo/Jacquelyn Martin)

WASHINGTON — After a decades-long fight, a national museum in Washington dedicated to Latinos can now move forward. This comes after President Trump signed a massive spending bill which includes the authorization for the new museum. Texas’s two Republican senators are big supporters of such an institution, in part because of the state’s demographics. Experts say Hispanics are on track to become the largest ethnic population in Texas

The voluminous year-end spending package allocates money for the long-sought National Museum of the American Latino. The legislation says, “the legacy of Latinos is deeply rooted in the very fabric of the history, democracy, freedom, and economic opportunity of the United States.” There is also language in the legislation that aims to ensure that the exhibits and programs of the museum reflects the diversity of political viewpoints among Latinos in the country. It builds on nearly three decades of efforts to establish the institution.

A 1994 report titled “Willful Neglect” found the Smithsonian Institution “almost entirely excludes and ignores Latinos in nearly every aspect of its operations.” According to the U.S. Census Bureau, Hispanics make up 18.5% of the United States population, which is about 60 million people. Sen. John Cornyn (R-TX) co-sponsored the bipartisan bill to create the museum.

Sylvia Orozco has been pushing for a national museum almost as long as she has been building out a Mexican art museum locally in downtown Austin. The artist co-founded the Mexic-Arte Museum in the Texas capital city in 1984.

“Our culture, our traditions, our history are embedded in our art and our culture, our heritage, and so it is very important for us to see ourselves in the artwork, but also to use this as a tool for education for the community,” Orozco said.

Spectrum News 1 caught up with Orozco during the opening days of the Mexic-Arte Museum’s latest exhibition, “Mexico, the Border and Beyond: Selections from the Juan Antonio Sandoval Jr. Collection.” Sandoval is a retired librarian from the University of Texas at El Paso who donated more than 1,500 artworks about the life and experiences on the U.S.-Mexico border.

Orozco said she believes the creation of a national Latino museum is well overdue.

“Washington is our capital, and that is the place where people recognize different communities, of different cultures here in United States,” she said.

Officials have two years to pick a site in Washington. A 2011 Congressional report estimates a Smithsonian American Latino Museum would cost $600 million. The proposed facility would be among the first built since the National Museum of African American History and Culture opened in 2016, and would be financed similarly by a 50-50 split of federal funds and private donations.

The cost, however, was not the biggest concern for the lone Republican senator who blocked the initial passage of the proposal. The National Museum of the American Latino Act was included in the year-end spending package after Sen. Mike Lee (R-UT) blocked it, as well as another bill that would build a Smithsonian museum honoring women.

“The last thing we need is to further divide an already divided nation with an array of segregated separate-but-equal museums for hyphenated identity groups,” Lee said.

For Orozco, the national museum is about fostering inclusion. Staff members belonging to local museums like hers will continue doing their part to teach others about an important and sometimes neglected part of American history. She said there are plans for the Mexic-Arte Museum to expand.

“Art and culture does not create division, it creates unity. Because museums teach, they inform, and they educate,” Orozco said.