DALLAS — Southern Methodist University has long dealt with the challenge of ensuring its Black community feels welcomed on campus. The private school is a predominantly white institution nestled in one of the most affluent areas in the state.

University leaders recently released a list of goals to improve the quality of life for Black members of the SMU community. These goals were created in response to the Black Unity Forum’s action plan developed over the summer and delivered to SMU with the hope the university will “engage in a fully accountable partnership with the SMU Black community.” The BUF is an organization of leaders from affiliate groups serving Black students, faculty, staff, and alumni of SMU.

"We deeply care about our university,” the BUF Action Plan reads. "Therefore, we refuse to be content and will not cease diligently working until every Mustang enjoys equally the value they possess at SMU. Sadly, through a lack of representation and opportunity, this is not the case for our Black SMU community. This needs to change immediately.”

In a letter addressed to the BUF at the end of September, SMU President R. Gerald Turner said he was grateful for the group coming forward with their concerns.

"I am grateful for your willingness to demonstrate your concern for SMU by leading us in these conversations about race and what it means to be Black@SMU. This was not easy, but your service to this University will make us better in every way. The conversations we have had over this summer were important to moving us toward this reality. I look forward to the continuation of our work together,” Turner’s letter read.

The BUF’s original plan submitted to SMU had 34 criteria the group deemed as “paramount to the success of [the] Black community at SMU.” The response from SMU gave a timeline on when and if these goals could be met and strategies to implement them. Some of them “will require multiple semesters to make systemic change,” like creating a Black student/alumni summit “to more effectively knit current Black students and alumni." The first request listed of hiring a Chief Diversity Officer was already met in August with the appointment of Dr. Maria Dixon Hall.

The response’s closing remarks read, in part, "We believe that the Black Unity Forum’s action plan and SMU’s response establishes a partnership that will positively shape our University for decades. If we commit to the fulfillment of this plan with mutual respect and a shared vision of a truly inclusive University community, we will provide progress not only for our Black students, faculty and staff, but for our entire campus community.”

Over the summer, after the George Floyd Protests sparked nationwide calls to end racial injustice, SMU students took to Twitter to share their concerns. The hashtag #BlackAtSMU trended once again, with former students, current students, and even faculty going public with their own experiences of racial profiling or discrimination on campus.

To my fellow white @SMU alums, PLEASE take the time to read through the #BlackAtSMU hashtag and listen to the black students (present and former) discussing their experiences at SMU...

“You can look at the #BlackAtSMU hashtag on Twitter and you can get hundreds, literally hundreds of examples of what students of color, specifically Black students, go through on campus,” said SMU junior Tyne Dickson. "I would say, personally, just being the only student of color, period — in a classroom, in an organization, in an event — it can become overwhelming. Especially when those spaces are created to cater to white students, specifically students of a certain class, that don't really cater to low income or even middle class students of color."

SMU has made strides this semester in its efforts to follow the motto “Every Mustang Is Valued.” President Turner said in a statement to the university that the “negative experiences shared through the hashtag are a stark reminder that we still have a lot of work to do.” He says SMU will be working toward increasing accountability, educating on implicit bias, and creating an environment where Black students, faculty, staff and alumni feel they belong.

Dickson said SMU has had an issue with its Black students feeling unwelcome and uncomfortable, and the administration has not always been responsive to it.

Dickson wrote an opinion article for the university’s student newspaper in late June which calls out “white, rich, colleges” for being “inherent participators in a system to disregard Black lives.” Dickson said in the past, there have been diversity initiatives with “virtually no meaningful results.” According to SMU’s Ethnicity Distribution for Fall 2020, 58.4 percent of students are white, and 6.9 percent are Black or African American, a few percentage points higher than in Fall 2019. 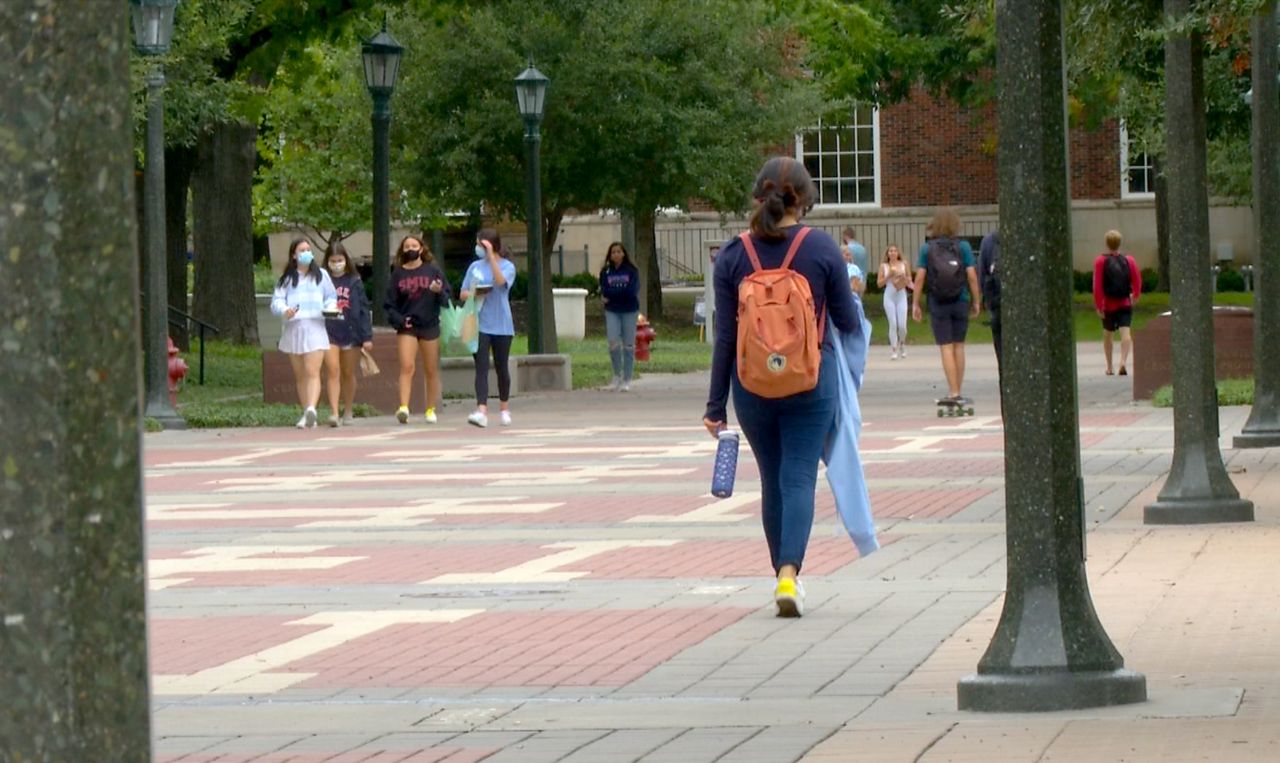 In a letter of commitment released with SMU’s response to the BUF Action Plan, the Board states "SMU was founded in 1911 by the Methodist Church and the city of Dallas, both of which were racially segregated at that time. While SMU may have reflected society then, we no longer hold those beliefs nor tolerate any racial injustices or inequities in our University or in the communities we serve. Although SMU has made progress in addressing racial issues, we know there is more that can and should be done.”

After a summer of protesting against racial injustice, Houston native Dickson decided it was time to make a difference on her campus in a way she knew how, by organizing a Black Lives Matter chapter, BLM @ SMU and inviting all students to participate.

"A lot of people can tell you that SMU is not always a conducive environment for students of color. And so I was feeling a lot of anxiety and I was kind of riled into action,” Dickson said. "A lot of the Black organizations [on campus] focus on celebrating and amplifying Black voices, which is so important. But we really need to start creating a cohesive environment at SMU that is less predatory, I would say. That's an abrasive word, but yeah. So, that's where [BLM at SMU] comes in to like start marches, start BLM series discussions, start Black artists events.”

Dickson and her team organized a march around the affluent neighborhoods adjacent to the SMU campus in early September. When asked why she wanted to start the group now, Dickson said she was tired of sitting still.

Today marks one hundred consecutive days of protests in Dallas. This afternoon, @smublm led a march around the perimeter of campus to protest racial injustice and police brutality. Over 500 members of the SMU community (students, faculty, staff, alums) showed up in defense of Black lives. #blmatsmu (ps swipe for a cute dog)

"Why now is because we can't wait any longer. Why now is because we don't have the privilege anymore to sit by and watch students of color, specifically Black students, go through these things. And we can't sit by and watch Black people get killed any longer,” Dickson said. "I hope to number one, bring a unified front to SMU’s campus — We're getting a big response which is really exciting — And we start to create a more safe environment for all students. My other hope is that we bring the BLM movement to campus and sustain the movement. We have a responsibility to continue this movement that's happening right now, to bring social justice. 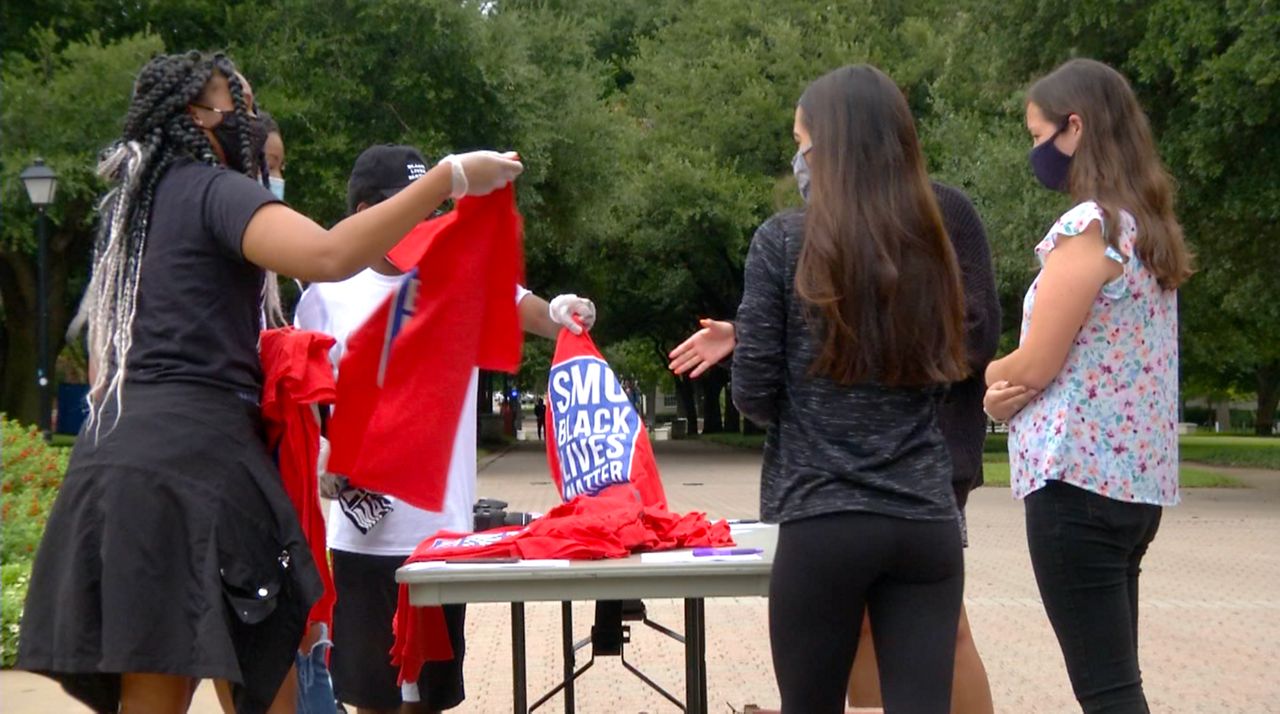 BLM at SMU hands out shirts ahead of a scheduled protest in September. (Stacy Rickard/Spectrum News 1)