FORT WORTH — Two weeks ago, Patrice Jones was preparing to leave her house to attend a memorial event honoring victims of police brutality. She had just stepped foot outside when black vehicles began screeching to a halt in front of her Arlington home. Jones, who had no arrest record or even so much as an unpaid parking ticket, ran back inside and started to cry.

“I literally couldn’t think of any other reason 10 Fort Worth Police officers dressed in military gear would pull up to my house in Arlington other than to kill me,” she said.

Jones is one of the most vocal leaders of the social justice organization Enough is Enough. Started as a Facebook group, members have now organized more than 30 protests in Fort Worth to demand an end to police violence against Black and other people of color. The evening before her arrest, Jones and other members of the group held a sit-in at a restaurant in the West 7th area. She was accused of damaging a countertop during the protest – a charge she denied.

For a class-B misdemeanor and a fine that could range between $100 and $750 if found guilty, the police department sent 10 officers from its Special Reaction Team – donned in flack jackets and carrying assault weapons – to serve Jones’ warrant. A neighbor later told her that the SRT officers had barricaded the entire block. She left her home in the back of a squad car, but that arrest and the subsequent media frenzy has traumatized her. She’s not alone.

Jones and others believe the police are targeting protesters and group leaders and arresting them on trumped-up charges. Jones was the first of six organizers or high-ranking members of Enough is Enough to spend time behind bars.

One of the group’s founders, Kwame Osei Jr., said police have followed home protesters from events, stalked organizers at their homes, and pulled over supporters for no reason. He said the police are trying to scare the organizers into stopping the protests and slowing the growing anti-police sentiment around the area. On July 14, area residents will vote on a measure to continue a one-half cent sales tax that will add $80,000,000 to the police’s annual budget for the next 10 years. The funding is currently is set to expire Sept. 30.

“I feel as though they are trying to deter us from moving forward,” he said. “It’s an intimidation tactic that’s not going to work. We had protesters who were arrested on a Saturday, and they were right back out with us on Sunday.”

Enough is Enough uses a security team to make sure the group of nearly 5,000 members isn’t looting, destroying property, or engaging with counter-protesters.

"That’s why you haven’t seen even one window broken during any of our protests,” Osei said.

He and other members emphatically deny that the protesters leaders have committed any real crimes. Some of the charges group organizers have faced include misdemeanor damage of property, failure to present identification, and disturbing the peace – for using a bullhorn. 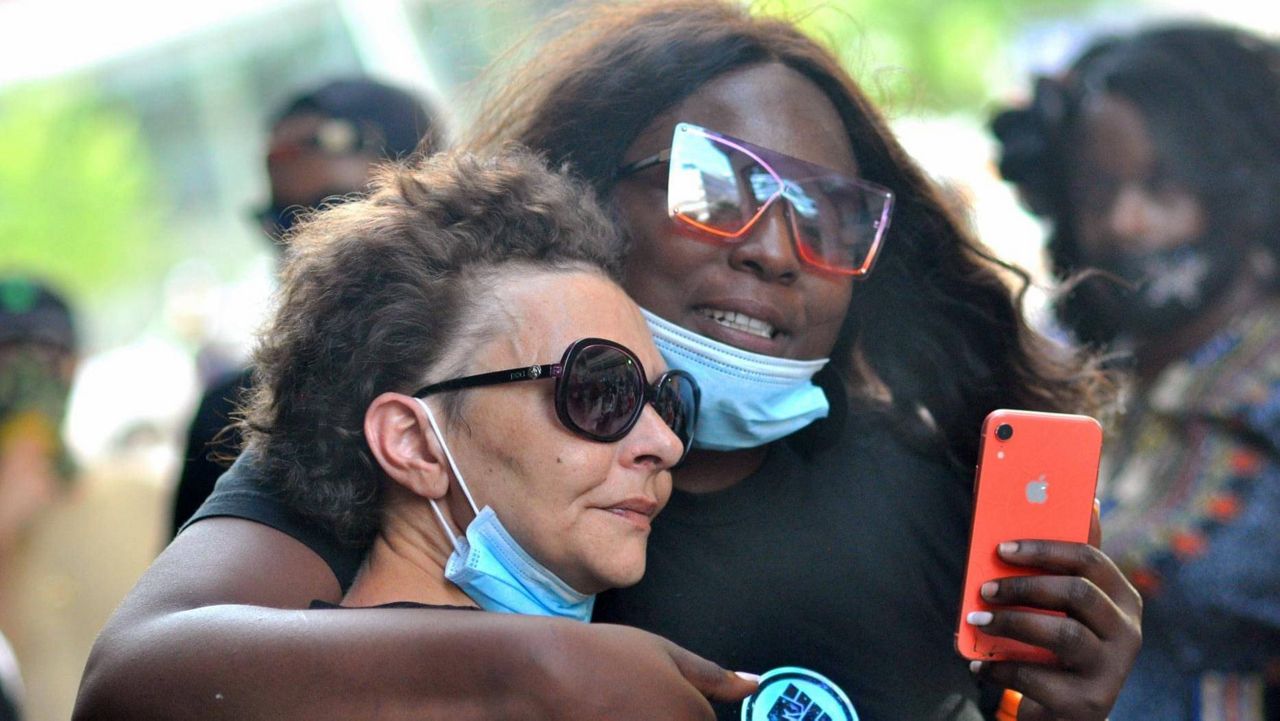 Not only have the marches not turned violent, but the protesters have, in some cases, been the victims of crime. On June 12, the group flooded downtown eatery Texas de Brazil. A white man used a racial slur toward protester Oneidra Ester, then the man spat and threw a glass of water on her. Police did not arrest the man but did make him apologize. Ester was arrested the following day for allegedly damaging a credit card machine at a different restaurant.

Jones also believes some local media outlets have been complicit in what she calls a smear campaign against the protesters. After her arrest, her mugshot appeared regularly on local television news.

“People automatically assume that if they put your mugshot on TV, she must be doing something bad,” she said. “She must be a criminal.”  She added a local TV affiliate “had my mugshot on TV for six days for a class B misdemeanor. That is an attempt to assassinate my character.”

The police harassment continued, Jones said. Just after her arrest, she noticed a truck parked outside of her house. The truck’s driver sped away after making eye contact with Jones – but not before she took a picture of the license plate. Though the driver of the silver Ford F-150 is not an employee of the Fort Worth Police Department, Spectrum News confirmed the truck’s registered address is the FWPD impound.

Fort Worth Police have not responded to multiple attempts to reach them for comment on this story.

Osei said the attention from police that his group and other protesters are experiencing is proof that the establishment is nervous.

“There’s a saying, ‘If you don’t have any haters, you’re not doing enough,’” he said. “We’re obviously making some traction here.”

Though Jones said her commitment to the cause is unwavering, her family is worried for her safety.