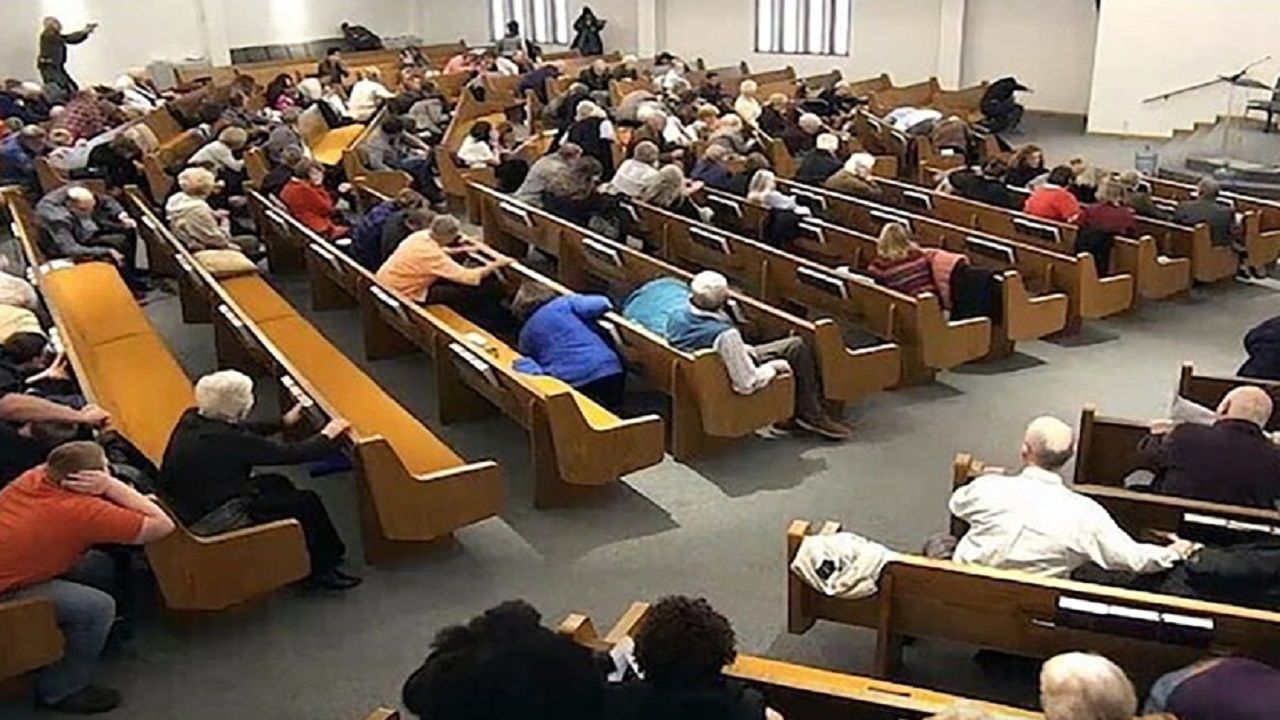 In this still frame from livestreamed video provided by law enforcement, churchgoers take cover while a congregant armed with a handgun, top left, engages a man who opened fire, near top center just right of windows, during a service at West Freeway Church of Christ, Sunday, Dec. 29, 2019, in White Settlement, Texas. The footage was broadcast online by the church according to a law enforcement official, who provided the image to The Associated Press on condition on anonymity because the investigation is ongoing. (West Freeway Church of Christ/Courtesy of Law Enforcement via AP)

WHITE SETTLEMENT, Texas  — A man who trained others in his Texas church to use firearms to protect the congregation fatally shot a gunman seconds after he opened fire during a service.

Jack Wilson fired a single shot, quickly ending the attack that killed two people at the West Freeway Church of Christ in the Fort Worth-area town of White Settlement.

More than 240 congregants were in the church at the time. Texas Attorney General Ken Paxton identified Wilson on Monday. Paxton also hailed the state's gun laws, which allow weapons in places of worship. The gunman has not been identified.

MedStar Mobile Healthcare spokeswoman Macara Trusty told the Associated Press that two people were fatally shot at the West Freeway Church of Christ in White Settlement. A third person in critical condition is being treated at a hospital and all of the victims are men, she said.

Authorities have not released any details about what led to the shooting.

An elder at the church told the New York Times that one of those killed was a security guard who responded to the shooter, calling him a dear friend.

“He was trying to do what he needed to do to protect the rest of us,” said the elder, Mike Tinius.

“It’s extremely upsetting to see anyone committing violence,” he added.

Tinius said he didn’t know the gunman and that the shooting appeared to be random.

Trusty said she was told by a supervisor at the scene that one of the people who died was the shooter. In an interview with Dallas TV station KTVT, Mike Drivdahl, the spokesman for the Fort Worth Fire Department, said he believes the gunman was among the three who were shot.

Two more people were treated for minor injuries at the scene, Trusty said.

WFAA, a Dallas-based TV station, reported that the church live-streamed the service on YouTube and that the video showed a man wearing a long coat produce a rifle or a shotgun which he fired twice before someone shot back. Some members of the congregation ducked behind pews while others with handguns rushed the gunman, WFAA said. It said church members can be heard screaming and crying.

White Settlement is about 8 miles west of Fort Worth.

Statement on shooting at West Freeway Church of Christ in White Settlement: pic.twitter.com/Crrrvavvs6