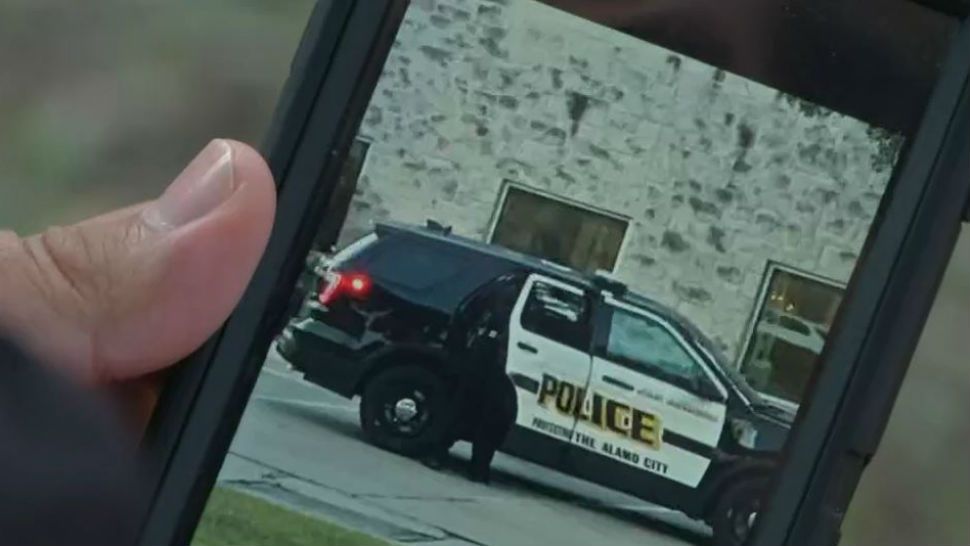 Tracer Martinez holds up a photo on his phone he took of a cop eating giving a man in the back of his car food from Whataburger. (Spectrum News/File)

SAN ANTONIO — A set of pictures is going viral on social media after a San Antonio man posted a touching exchange between two unlikely people.

The exchange took place at a Whataburger along I-10 at De Zavala Road last week.

"From the corner of my eye I see an SAPD officer in his sedan and I start seeing someone moving in the backseat," Tracer Martinez, a witness said.

The officer was pulling through the drive thru with what appeared to be a handcuffed man in the back of his patrol cruiser.

"He wasn't using his hands and you could tell he was in custody so I look at Shea, my wife, and I'm kinda questioning [the officer] and we didn't know what to think of it," Martinez said.

Martinez and his wife began to laugh at the thought of an officer picking up food before taking the man in custody downtown.

"So the officer drives off just to pull into the parking lot right beside us."

What happens next, took the couple by surprise.

"He takes the man in custody out, takes off his handcuffs from his back and cuffs him in the front and you can see him load [the man] back into his squad car and gives him back his food," Martinez said.

According to Martinez, the police officer went on to prepare a tray for the man to allow him to eat before returning to the driver's seat.

"I just kinda stuck my phone up [on my window] and shot a photo."

That photo is now posted online and going viral.

"What we wanted from the post was to mostly show that we show grace towards other people," said Shea Martinez.

Now that grace is being shown in return for the anonymous officer.

"[The comments] have been pretty positive. Backing the blue is a big one," said Tracer. "I didn't expect for it to turn into what it was [and that] was the officer showing absolute love for the guy."