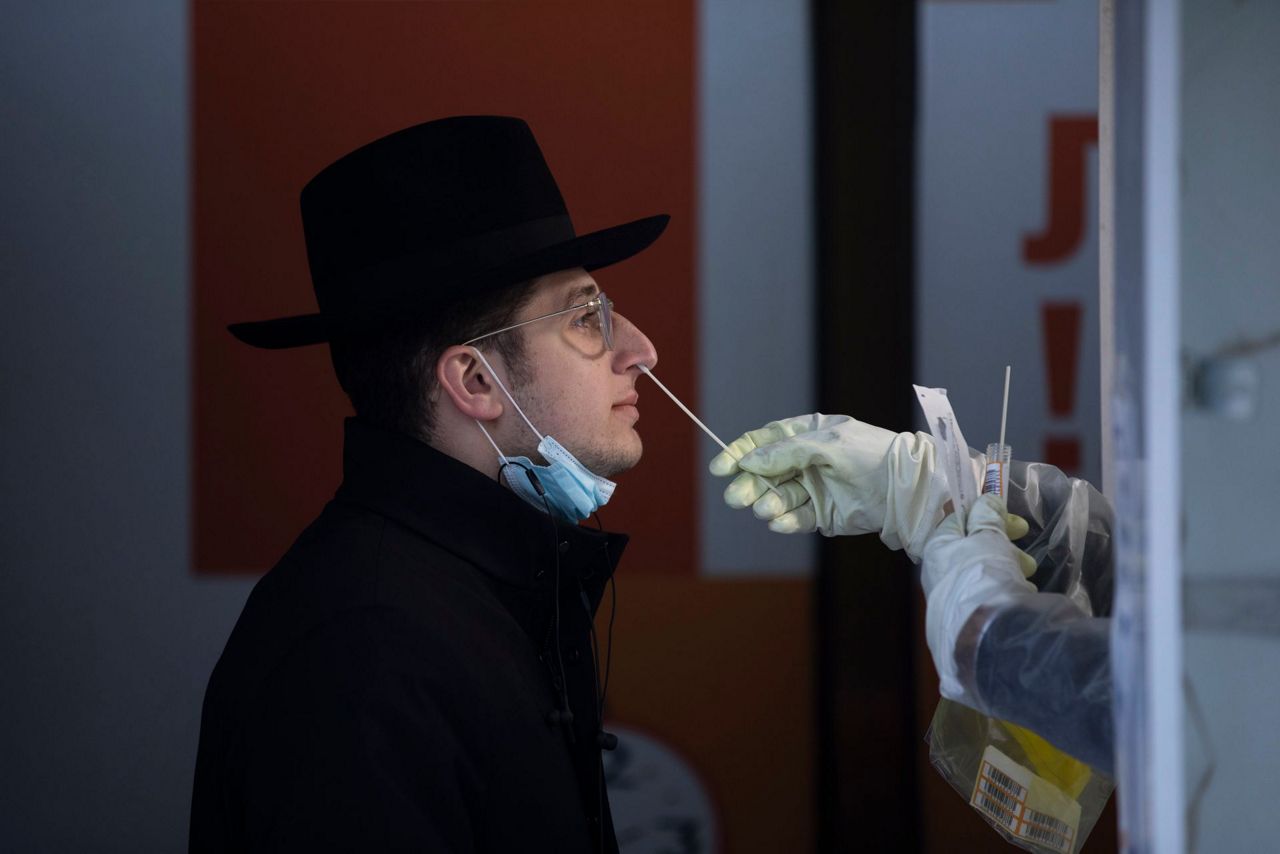 1 of 3
An Israeli health worker tests an unvaccinated ultra-Orthodox Jewish seminary student for COVID-19 at a coronavirus testing center in Jerusalem, Wednesday, Dec. 22, 2021. The student, who declined to give his name, said he didn't want to get vaccinated because he previously had COVID-19. Hundreds of thousands of ultra-Orthodox Jews in Israel have yet to receive their COVID shots. The group has some of the lowest vaccination rates in the country despite being pummeled by the virus throughout the pandemic. (AP Photo/Oded Balilty) 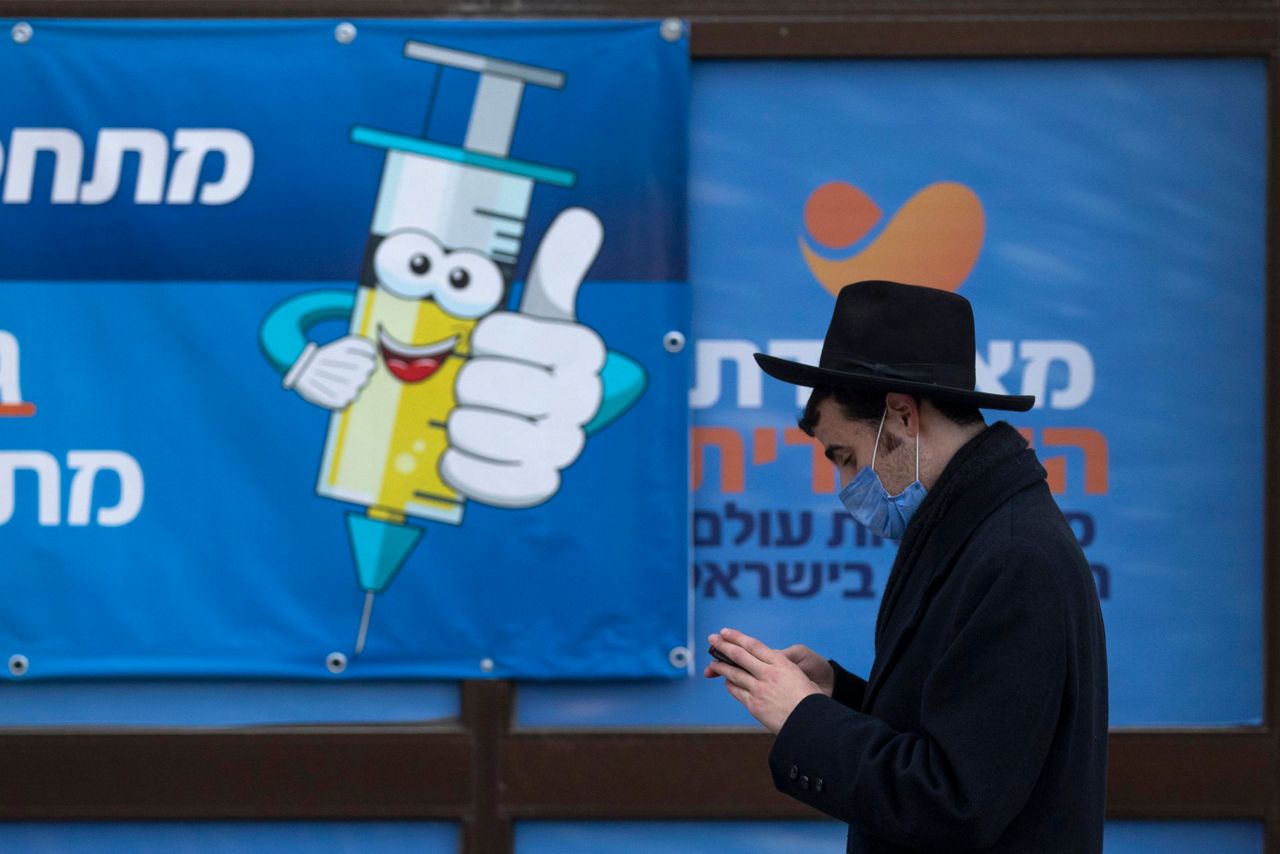 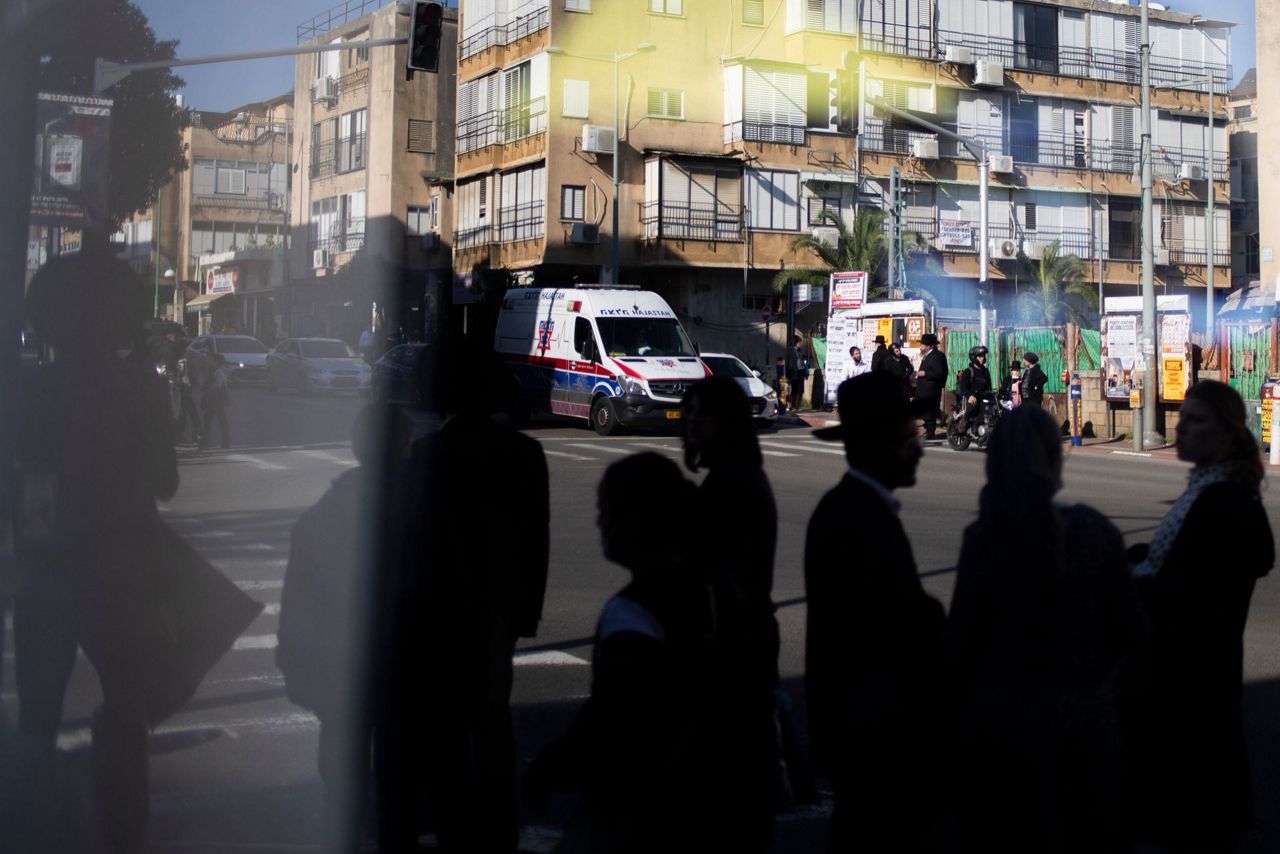 3 of 3
Ultra-Orthodox men and women cross a main junction in the ultra-Orthodox city of Bnei Brak near Tel Aviv, Israel, Sunday, Dec. 26, 2021. Hundreds of thousands of ultra-Orthodox Jews in Israel have yet to receive their COVID shots. The group has some of the lowest vaccination rates in the country despite being pummeled by the virus throughout the pandemic. (AP Photo/Ariel Schalit)

Hard-hit by COVID, Israel's ultra-Orthodox slow to get shots

BNEI BRAK, Israel (AP) — Yossi Levy has repeatedly booked and canceled his coronavirus vaccine appointment. The 45-year-old ultra-Orthodox Jew recovered from the virus earlier this year, as have his eight children and wife. But a combination of lethargy and procrastination has prevented him from following through and getting inoculated.

“It isn't something pressing. I'm not opposed to it. It's just laziness," he said.

Levy is among the hundreds of thousands of ultra-Orthodox Jews who have yet to receive their COVID-19 shots. The group has some of the lowest vaccination rates in the country despite being hit hard by the pandemic.

Facing the new coronavirus variant omicron, officials are now scrambling to ramp up vaccination rates in a population that has so far been slow to roll up their sleeves.

“We are going on the offensive with the issue of vaccinations,” said Avraham Rubinstein, the mayor of Bnei Brak, the country’s largest ultra-Orthodox city.

It has been one year since COVID-19 vaccines became available, yet vaccine reluctance persists even as deaths mount and the highly contagious omicron variant spreads around the globe. An unconventional cadre of people has stepped up to promote vaccination with efforts that traditionally have been the realm of public health officials.

Israeli officials have appealed to the community’s prominent rabbis, who serve as arbiters on all matters, to promote vaccination. They are deploying mobile clinics. And they are beating back a wave of lies about the vaccine that has washed over parts of the community.

The vaccination rate is low in part because half of the ultra-Orthodox population is under 16 and only recently made eligible for vaccination. Also, many ultra-Orthodox were already infected or believe they were and don’t think they need the vaccine.

The outreach effort has had mixed success. Officials hope to raise the vaccination rate with a new mobile-clinic campaign at religious schools and a media blitz stepping up pressure on parents to vaccinate children.

Israel was one of the first countries to vaccinate its population late last year and the first to give booster shots. But the campaign has lagged in recent weeks and hundreds of thousands of people remain unvaccinated or without a booster as the specter of an omicron surge looms.

While vaccination rates for the second dose among the general population hover around 63% and the booster at 45%, in the ultra-Orthodox community the number is around half of that. The community's immunity shoots up somewhat when the 300,000 or so of those who are known to have recovered are included, but Israel's Health Ministry recommends those who were infected to get at least one shot if six months have elapsed since the infection.

There are societal reasons for the quick community spread. The ultra-Orthodox tend to live in poor, crowded neighborhoods, with large families in small apartments, where sickness can quickly spread. Synagogues, the centerpiece of social life, bring men together to pray and socialize in small spaces.

The particular way of life of the ultra-Orthodox, also known as Haredim, has made driving up vaccination rates a unique challenge for health officials.

The cloistered community has long been separate from mainstream Israeli life, with children studying scripture but very little math and English. The community typically shuns the internet, doesn’t watch secular TV and tends to live separately from non-religious Israelis. It is suspicious of secular state authorities and many of the trappings of modernity.

“For Haredim, there is a double fear: fear of the state and fear of science. There is no basic trust in these entities,” said Gilad Malach, who heads the ultra-Orthodox program at the Israel Democracy Institute, a Jerusalem think tank. He said that skepticism has allowed unfounded claims about the vaccines to spread in the community.

Avi Blumenthal, an adviser to the Health Ministry on the ultra-Orthodox, said vaccine information is disseminated to the ultra-Orthodox public through its local media as well as in biweekly messages posted on community notice boards, known as “pashkevils.” He says these means reach the overwhelming majority of Haredim.

The ultra-Orthodox follow a strict interpretation of Judaism and rely on rabbis to guide them in many life decisions. While some rabbis have actively encouraged vaccination, others have taken a less aggressive approach and their followers have been less enthusiastic about getting inoculated.

Blumenthal, who himself is ultra-Orthodox, said the Health Ministry recently held a conference at the country’s largest hospital, inviting prominent rabbis to converse with doctors about the importance of the vaccine. The head of the government’s coronavirus advisory panel has repeatedly met with important religious figures, urging them to spread the word on vaccines.

“We go by the Jewish sages,” said Dvora Ber, 27, a Bnei Brak resident and mother of four who is vaccinated. “What they tell us, we do.”