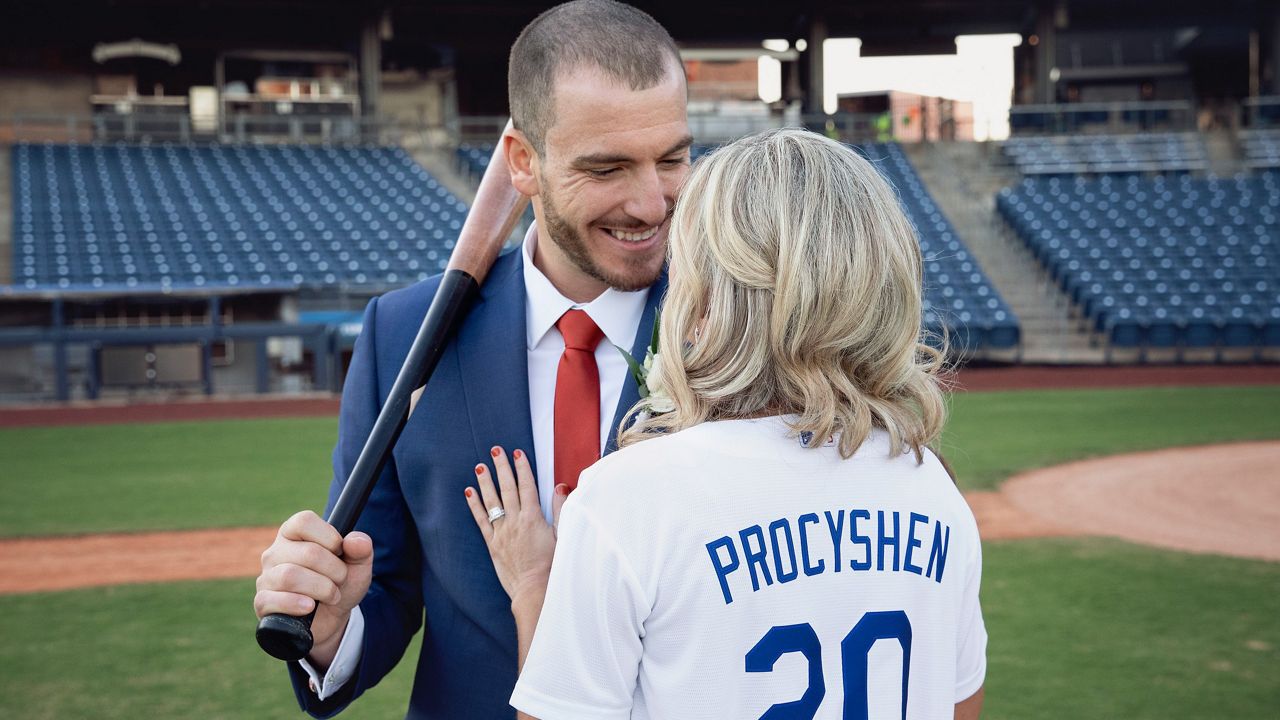 In his pursuit of his MLB dreams, RoughRider catcher Jordan Procyshen finds his dream girl

FRISCO, Texas — Frisco RoughRiders catcher Jordan Procyshen says every day he has a jersey on his back is a good day. So for the 28-year-old Canadian, it’s been a good day for the past eight years. His professional baseball journey has taken him through two different minor league levels, suiting up for 11 different teams all for one goal: step foot on a Major League Baseball field.

Navigating the gauntlet of the system is nothing new for the minor league veteran.

“The grind is no joke,” Procyshen said. “When I first started playing, there was a rookie ball short season - low A, high A, AA, AAA. But it doesn’t make it any easier. Being away from your family is hard. It’s one of those things where you have to have the passion."

For Procyshen, the passion is clearly there. As a Calgary, Alberta, native who grew up a Toronto Blue Jays fan, he’s had a bat and glove in his hand since he was 2 years old. The love for the game has never faded, probably because of the encouragement he’s received from those closest to him.

“Just having that support system to tell me to never quit is the biggest boost,” he said. “They want me to reach that goal. Yes, I’m very happy to be playing this game for eight years professionally. But I still haven’t reached my goal."

Luckily for Procyshen, while he was chasing his dreams, he found his dream girl along the way. During his time with the Tulsa Drillers, he singled out a girl behind home plate and asked her to meet him after the game. The rest is history.

“I was sitting in the crowd with my friends. Jordan kept looking back there,” said Procyshen's wife Lauren. “Then he motioned for me to meet him after the game. So I met him up at the concourse and we got a drink."

That one drink led to their first date, which led to an engagement, a wedding and now the two are expecting their first child in December.

In the meantime, Procyshen will be busy behind home plate with his wife watching nervously in the stands.

“I get so nervous especially when he’s hitting,” Lauren admitted.  “I get nervous because I want him to do so well. He’s put so much time into it.”

“My ultimate goal is to get to the big leagues. That will never change,” Procyshen said. “Even when I’m done playing baseball, I will always want to get to MLB as a coach, a manager or whatever.”

Wherever Procyshen lands on the diamond, his wife will be right behind him.

“My wife is a lot better at keeping me levelheaded than I am. There were times when I thought I’d never get a job,” he said. “But she kept pushing me and said something is going to come and sure enough it did."

The journey is not complete yet. With the support of his family and the way he grinds, Procyshen just might make it to the show.