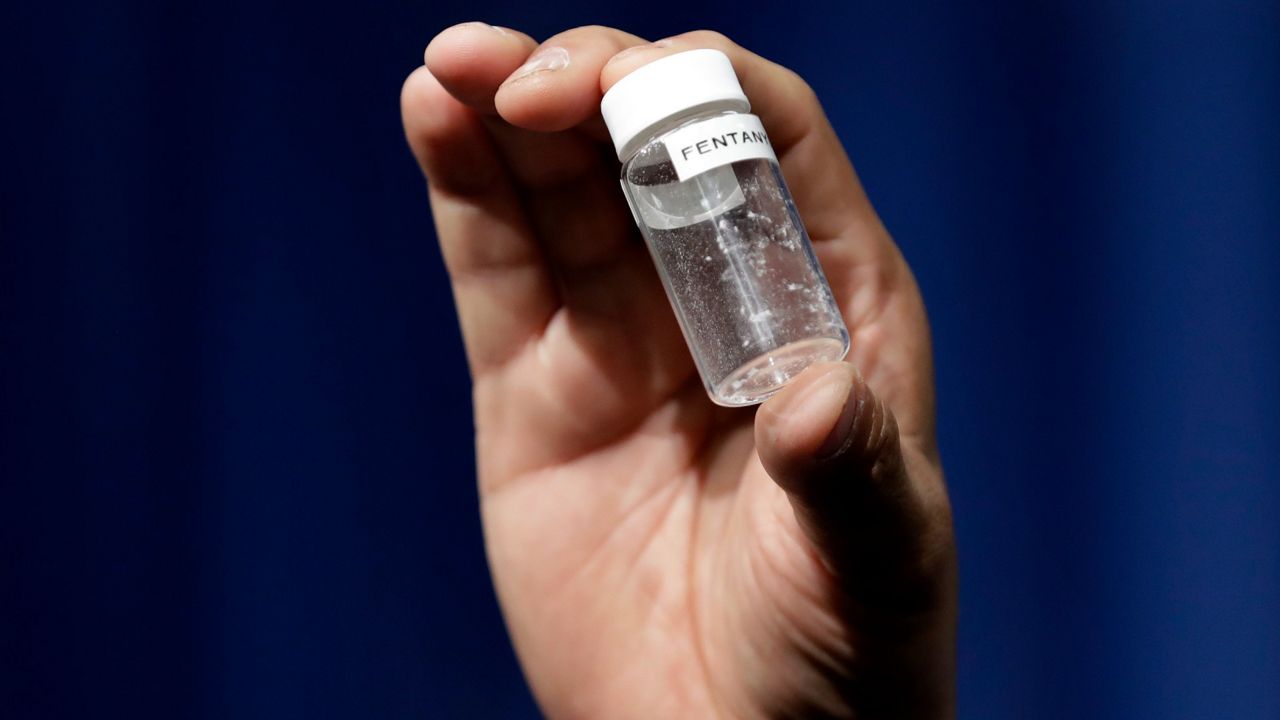 In this June 6, 2017, file photo, a reporter holds up an example of the amount of fentanyl that can be deadly after a news conference about deaths from fentanyl exposure, at DEA Headquarters in Arlington, Va. (Associated Press)

Texans disagree on how to solve fentanyl crisis

AUSTIN, Texas – Gov. Greg Abbott’s Operation Lone Star has cost the state billions of dollars. Its purpose is to address criminal activity along the border. The governor’s most recent target is fentanyl.

Abbott was not available for an interview. But during a recent press conference, he directed the Texas Department of Public Safety to intercept the synthetic opioid before it crosses state lines.

“Texans are victimized by Mexican cartels that produce and import it,” the governor said.

Through Aug. 31 of this fiscal year, U.S. Customs and Border Protection officers and Border Patrol agents operating in Texas have seized 675 pounds of fentanyl.

“Literally one pill that’s over two milligrams can kill someone,” said Steve McCraw, the director of the Texas Department of Public Safety (DPS). “We had a trooper yesterday exposed to fentanyl when he was searching the vehicle and was overcome by it. [The trooper] was able to be treated with Narcan and taken to the local hospital. He’s fine. But that’s the type of thing that we’re seeing today that anybody can be exposed to it, and it certainly is lethal.”

One of our Troopers became ill after being exposed to a substance while conducting a vehicle search in Bexar County. EMS administered NARCAN, and the Trooper was transported to a hospital. Special Agents were able to locate a substance in a container that tested + for fentanyl. pic.twitter.com/bABue97YdK

Even though there’s less fentanyl coming across the border than other drugs like marijuana, methamphetamine and cocaine, McCraw said the synthetic opioid is being targeted because it’s so potent, lethal and cheap.

“Fentanyl today is produced mainly in Mexico with precursor chemicals that originate from China, which means they can operate 24/7, and they can flood the market,” McCraw said. “Moreover, what the cartels have been doing is producing these counterfeit pills. They’re virtually identical to the original pill.”

People take pills without knowing they’re laced with a lethal dose of fentanyl. Some fentanyl even looks like rainbow candy.

“Someone may be using heroin that could have fentanyl mixed in with it, and that dramatically increases the overdose risk,” said Beau Kilmer, the director of the RAND Drug Policy Research Center. “Then there are also people who are taking counterfeit pills that look like Xanax or Oxycontin, but it’s actually a counterfeit pill with fentanyl in it.”

Both Kilmer and McCraw called fentanyl a “poison.”

“What’s happening with fentanyl is more like a poisoning outbreak than a traditional drug problem,” Kilmer said. “So we really need to think outside the box and start innovating and trying new approaches for reducing the deaths associated with fentanyl… If we’re just going to continue to treat this like a traditional drug problem, and largely focus on supply reduction, make marginal increases in terms of access to treatment — especially since there are a lot of people that are dying that weren’t necessarily looking for fentanyl. It looks bleak to me.”

Kilmer said while most are illegally manufactured fentanyl does come from Mexico, the state needs to focus on harm reduction, too.

“If you’re putting most of your money on trying to reduce supply, you really are missing the boat,” Kilmer said.

“It’s not a silver bullet, but I think it’s just one piece of a comprehensive strategy that should be considered,” Kilmer said.

Critics of the governor say he needs to focus on improving public health measures instead of stirring up fear around the border.

“Not only are the war on drug strategies he’s employing expensive, harmful, ineffective, but they’re actually contributing to the fentanyl overdose crisis that we’re experiencing right now because the drug supply is evolving based on those punitive strategies,” said Cate Graziani, the co-executive director of the Texas Harm Reduction Network.

Graziani said Gov. Abbott’s messaging about this being a border issue is “disappointing.” She thinks the money that’s being spent there to reduce the supply should instead be directed toward harm reduction strategies.

“Unfortunately, we are seeing him use people’s lives as a political bargaining tool leading up to this election,” she said. “It is truly kind of hard to wrap our heads around the amount of money that is being spent on Operation Lone Star. Billions of dollars that if, rather than spent there, were infused in our substance use recovery network, in our harm reduction infrastructure, in methadone treatment slots, housing, and health care, the positive impact to Texans would be felt. It would be enormous. And yet we’re just losing billions at the border because of the governor’s political strategies. It’s really heartbreaking. We’re not sure what needs to happen for him to understand how badly this is affecting Texas for generations to come.”

McCraw said that parents should be educating their children about how dangerous it is to take drugs, especially since any of them could be laced with a lethal dose of fentanyl.

“It’s not a political issue. It’s a public health to the public safety issue,” McCraw said.