OAKLAND, Calif. — Adolis García doubled in pinch-runner Eli White in the top of the ninth inning, Nathaniel Lowe followed with a two-run homer, and the Texas Rangers beat the Oakland Athletics 4-1 on Thursday night.

García and Kole Calhoun each had two hits as the Rangers won their second straight after dropping three in a row on their 10-game road trip. Texas also scored a run on a bases-loaded walk by Andy Ibañez.

Chad Pinder had two hits for Oakland. The A’s have lost 12 of their last 14 at home.

The Rangers scored late off the A’s bullpen after starters Martín Pérez and Frankie Montas kept both offenses in check.

Jonah Heim began the winning rally off Lou Trivino (1-3) with a single up the middle just past the glove of diving second baseman Sheldon Neuse. After White replaced Heim, García lashed a sharp double into the left field corner.

“He’s been really good but I was just kind of trying to make contact,” García said through an interpreter. “I saw the pitch I was looking for, made good contact on it.”

Pérez pitched seven strong innings of four-hit ball but left with no decision in his 200th career start.

Pérez’s streak of 25 consecutive scoreless innings on the road ended in the fourth on a changeup that bounced underneath the glove of catcher Heim, allowing Pinder to score from third. Pinder singled leading off the inning and went to third on Sean Murphy’s double.

“I was throwing how I’ve been throwing,” Pérez said. “I was able to keep the game tight. My team, they picked me up in the ninth inning, so that was great for me.”

Montas had 11 strikeouts in seven strong innings. He allowed three hits and an unearned run, which came after a fielding error by shortstop Elvis Andrus.

Matt Bush (2-1) retired three batters to win. Joe Barlow worked around a leadoff walk in the ninth for his eighth save.

The A’s missed an opportunity in the seventh when leadoff hitter Christian Bethancourt was ruled out for interference. Bethancourt bunted down the first base line and went to second when Pérez’s flip throw to first baseman Lowe sailed down the line. Umpires quickly made the out call and A’s manager Mark Kotsay came out to argue. Andrus, the next batter, doubled.

“Umpire, in his opinion, (said) Bethancourt did not have both feet in the box running down to first base,” Kotsay said. “The argument for me was more about the play itself and the throw. It was so far up the line or in foul territory that the throw was uncatchable, in my opinion.”

The Rangers benefited from the call but Woodward isn’t a fan of the rule.

“It was a good play by Bethancourt, the bunt,” Woodward said. “I know the rule but I don’t love it.”

Pérez had a hand-written note inscribed above the bill on his cap that read: 4 Uvalde, a reference to the school shooting in Texas earlier this week that killed 19 students and two teachers. 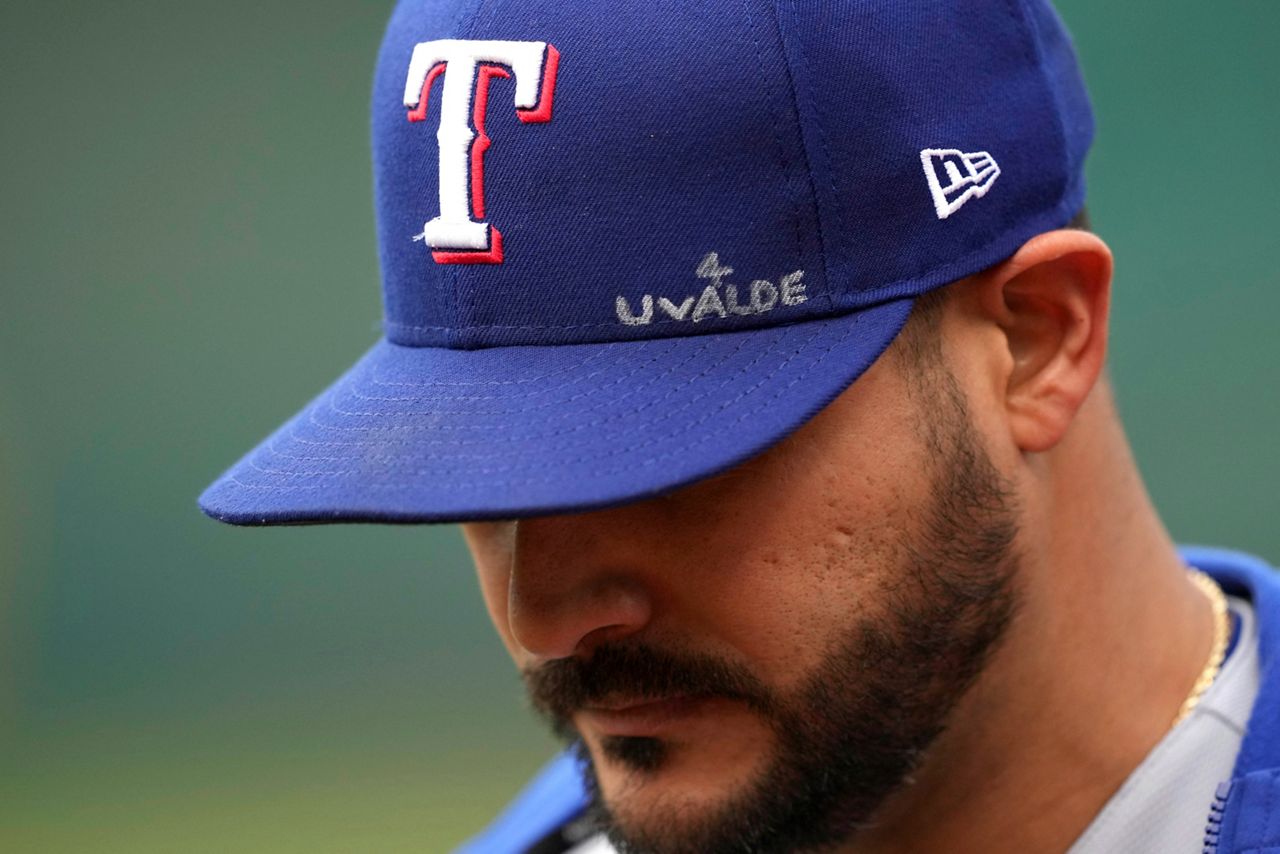 Texas Rangers' Martin Perez walks to the dugout with an inscription on his hat dedicated to the victims of the Uvalde, Texas, school shooting, before the team's baseball game against the Oakland Athletics on Thursday, May 26, 2022, in Oakland, Calif. (AP Photo/Darren Yamashita)

“It’s time for the government to do something,” said Pérez, who has children of his own. “It’s happening over and over and over and nobody is doing anything. It’s only happening in this country. In my country, growing up in Venezuela, it’s not a safe country. Then to come here and feel that way too, scared, … it’s really bad. What happened to those kids is bad and we feel that. Every time I went out there I said, ‘This is for the city.’”

Montas moved into a tie with Catfish Hunter for third place on the A’s list with nine games with 10 or more strikeouts. Vida Blue holds the franchise record with 21. … The attendance at the Coliseum was 3,203. It’s the fifth time this season that the crowd has been less than 3,300.

Rangers: RHP José Leclerc allowed one run in two innings of his first rehab start with Double-A Frisco. Leclerc began the season on the 60-day Injured List after undergoing elbow surgery in March 2021.

A’s LHP Cole Irvin (2-2, 2.94 ERA) makes his second start since coming off the injured list. Irvin beat Texas in April for Oakland’s only win of that three-game series. Rangers RHP Jon Gray (1-2, 5.14 ERA) has allowed 10 runs in the first inning of his six starts this season.