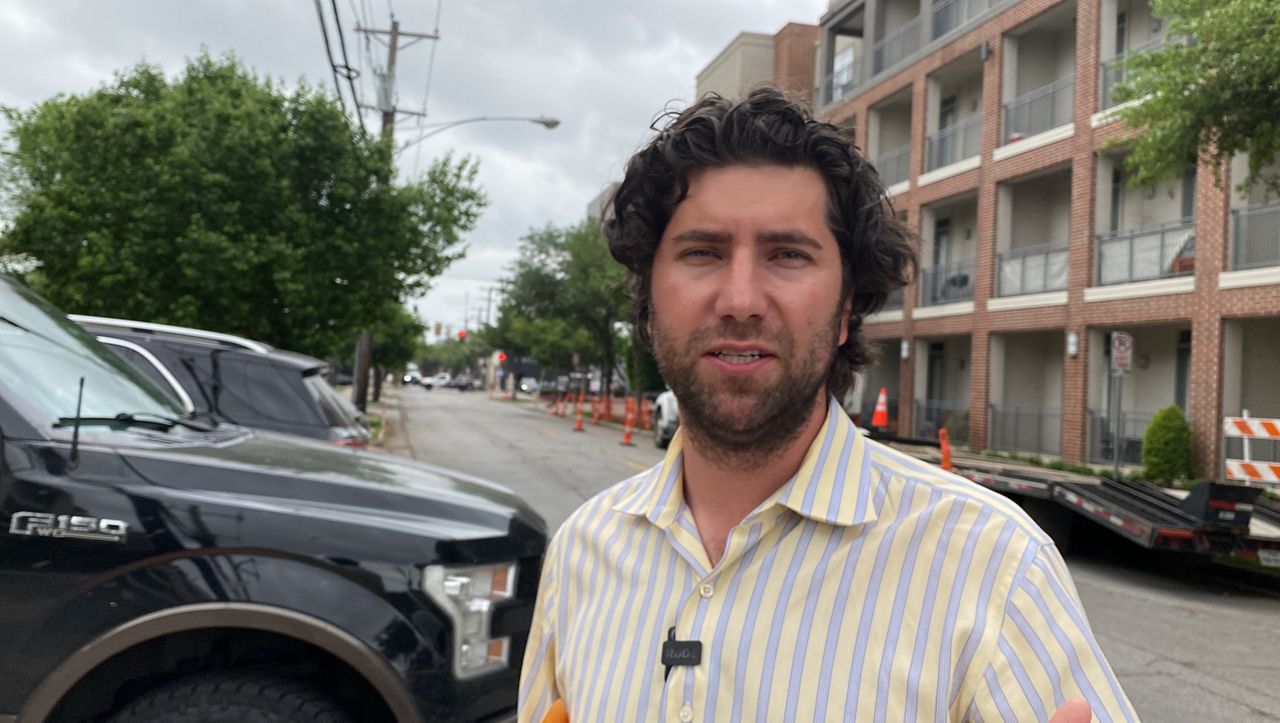 Patrick Donlin, a commercial property owner, is not happy with a new Dallas project that will impact his business. (Spectrum News 1/Michael Lozano)

DALLAS — A new project is underway that will bring a Kroger and affordable living units to a Dallas neighborhood, creating some growing pains for one property owner who is located right beside it.

Patrick Donlin is the CEO of Mr. D Real Estate Group in Dallas, Texas. He oversees dozens of residential properties and a few commercial ones.

One of his main offices is a commercial building he bought just east of the Central Expressway near downtown Dallas. He’s owned the property for six years, renting out store fronts to a few tenants in that time span.

Now, in 2022, Donlin’s expected to lose a sizeable chunk of his parking spaces to the Hall Street Project. The tax-abated project will allow Kroger to build a storefront and apartment complex right across from Donlin’s property on Hall Street.

The tax-abated project, according to city officials, is all to provide affordable living situations for an ever-growing community. However, the project will also entail expanding sidewalks to six feet wide to comply with city and statewide requirements.

Donlin showed Spectrum News 1 how the sidewalk expansion would infringe on his private parking lot.

“Move this fence 10 feet the other direction, which will eliminate five parking spots,” Donlin said.

Donlin says his property is the only one that will be affected by the project that started in early 2022 and approved in October 2021.

Though he’s not opposed to growth and expansion, he doesn’t want that growth to affect his livelihood and the livelihood of his tenants.

“This can be a good situation to encourage development, while not totally killing my business, and they’ve said, ‘No negotiation. This is the process,’” Donlin said.

In an email from a City of Dallas spokesperson, they state, “Any encroachment to public right of way, including fences, structures, private parking, etc. need to be removed and/or relocated to be within the private property limits.”

Donlin says the city already approved his private parking lot and the parking spots in front of his commercial building before this project ever came to light.

“Why is it changing now? Why does it only impact my business?” Donlin noted.

The City of Dallas says, “Public Works is are of Mr. Donlin’s concerns and is working with him to resolve them.”

Donlin says many attempts to speak with city leaders about the matter have largely been ignored.

“The frustration is when a corporation comes in an attempt to kill a small business,” Donlin said, noting he is all for the project, as long as he’s able to keep the parking spots.