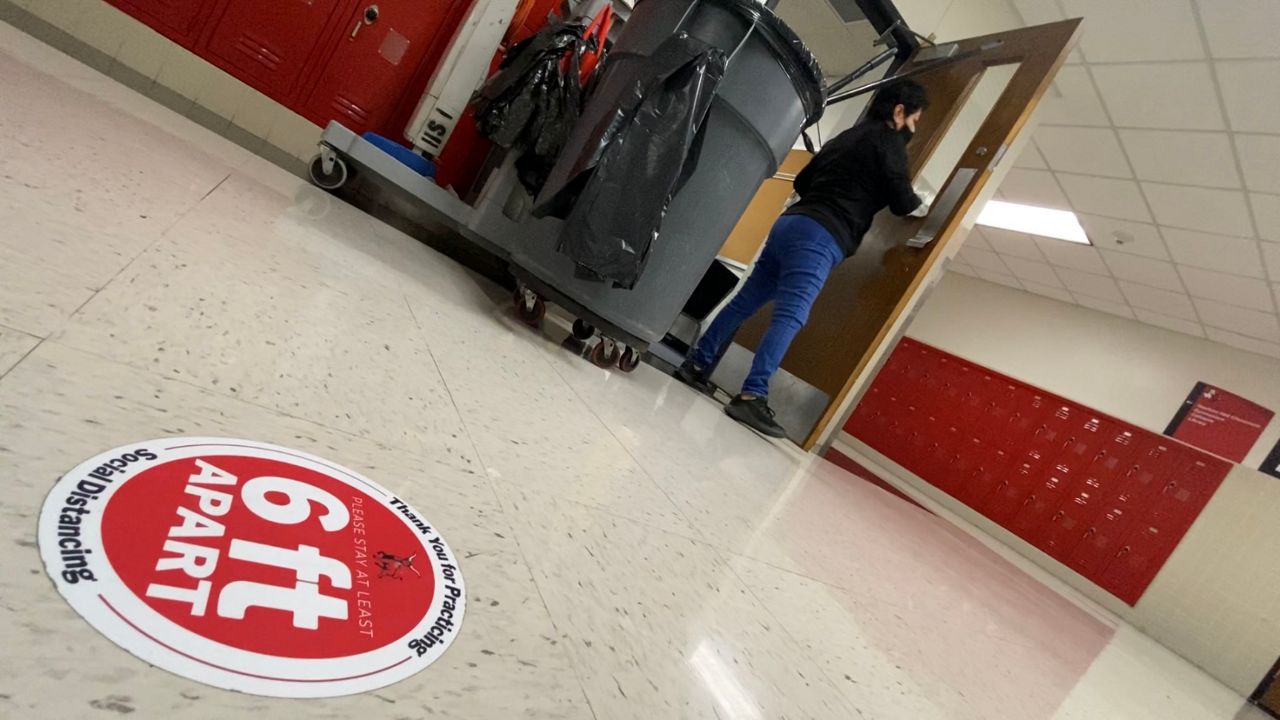 A custodian at Cedar Hill High School cleans every touch-point in a classroom amid the omicron wave of COVID-19. (Spectrum News 1/Brian Scott)

CEDAR HILL, Texas — As COVID-19 dominates conversations in local schools because of the omicron variant forcing several class cancellations and delays, the pressure is on for the custodial staff trying to keep the facilities clean.

Custodian Carl Anderson walked the hall toward the gym at Cedar Hill High School to scope out the situation ahead of basketball practices Tuesday. Being assigned to clean in the sports wing of the school is always a bit nostalgic for the six month member of the custodial team there.

“See, I actually graduated from Cedar Hill in 1993,” said Anderson. “I played football and basketball.”

The gym was just one of Anderson’s several assignments that day. He said he’d just come from another school in the district where he’d worked a shift to help out. Much like the teaching and administrative staff shortages, he said the custodial department was hit by a high amount of sick calls due to COVID or other illnesses.

Eva Hernadez, lead custodian at the school said they were down about 25% of their usual staff that day at the high school. Some of her team had to cover extra zones in the large school as a result, but she said they’re used to stepping up as a team when needed.

“I’ve been doing doubles for the past three weeks, but hey, it’s okay with me,” said Anderson.

According to district leaders, the Cedar Hill ISD recently raised custodian pay to $15 per hour starting and added other bonuses for its cleaners. Anderson and other members on the high school’s cleaning team said they have a sense of duty to their schools and the kids trying to get an education during the pandemic.

With the omicron wave in full effect as students returned from winter break, custodians in districts across Texas again stepped up cleaning efforts and doubled down on safety efforts aimed at stopping the virus.

Cedar Hill custodian Anna Aradjo said they’re making sure not to miss any surfaces or touch-points in their daily rounds, while upping efforts to protect themselves from catching the virus.

“Everything: we use gloves, masks and we just take some distance about each other, you know, we try,” she said.

At Cedar Hill High School, it was clear the custodians’ extra efforts weren’t going unnoticed. Even with few students in the school during after-class hours, several of those lingering gave the team members waves or acknowledgement as they passed by. Many of the custodians recounted students and teachers often thanking them for all they do for the school. Hernandez said the appreciation certainly goes a long way.

“Everybody knows that we’re missing people and everybody’s cooperating with us,” she said. “Everyone has the attitude to help us.”

As Anderson prepared to begin another afternoon of deep cleaning in his old stomping grounds, he did so with a smile.

“The kids appreciate it too,” he said.