Volunteers at The Pentecostal Church in DeQuincy, La., prepare food for a drive-through pickup. (Photo courtesy of Amy Hamilton)

DEQUINCY, La. — When Hurricane Ike hit the southern Texas coast in 2008, members of the Cajun Special Forces, a group of volunteers who help rescue, feed, and deliver supplies to victims of natural disasters, arrived in the area en masse. The Louisiana-based group rescued people whose houses were underwater, distributed much-needed feed for livestock, and brought food to a region that was without power for days.

Beaumont resident Brian Dunigan didn’t forget their generosity and sacrifice. Since Hurricane Laura made landfall more than three weeks ago, he and a group of volunteers have been shuttling food and supplies to some of the hardest-hit areas of Southwest Louisiana. Dunigan and his fellow volunteers have chosen to focus on the small towns that he and others say don’t receive the same attention as Lake Charles and other bigger cities ravaged by the storm.

“Once CNN and Fox News or whatever news crew leaves the hurricane, people from other cities and states think the worst is over, but it’s not,” he said. “Just because the sun is shining at your house and it’s beautiful, 30 miles to the east it’s still messed up. They need help.”

Since Katrina devastated Louisiana, Dunigan and others have been raising money and soliciting donations of food and supplies year-round in preparation for natural disaster relief. He and his wife started a nonprofit, Helping Hand of Southeast Texas, which uses 100 percent of its donations to purchase vital provisions for storm victims. He and others coordinate with local authorities on where the group should visit to pass out their food and supplies. 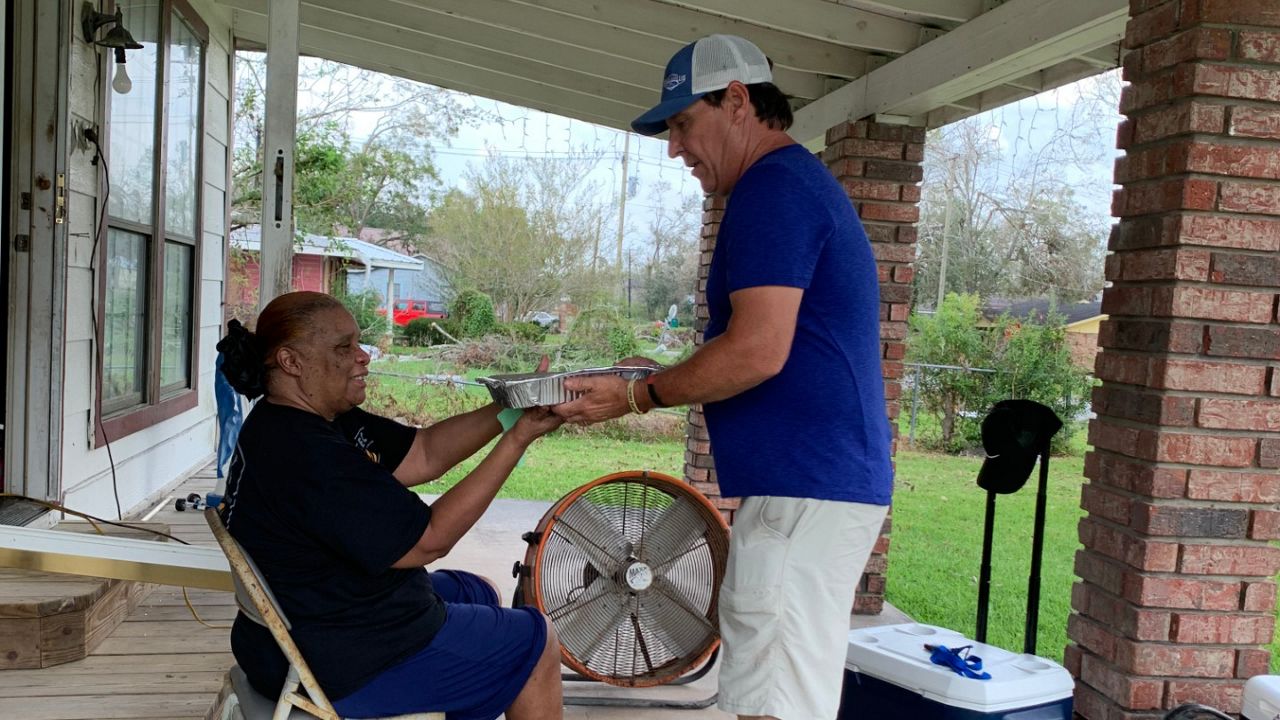 Working with Dunigan, Winnie, Texas, resident Amy Hamilton, who owns popular eatery Cattleman’s Kitchen, prepared enough food to feed about 3,000 people. She said organizations, businesses, and people from all around the country have sent money and food. The All-American Beef Battalion, a trade group that supports American service members, sold Hamilton and Dunigan more than a thousand pounds of pulled pork and 300 pounds of sausage for $1 a pound – a roughly 75 percent discount, according to various barbecue forums.

Dunigan and Hamilton recently returned from a short tour of smaller towns in their neighboring state –– including Carlyss, DeQuincy, Sulphur, and Vinton –– where they dropped off pulled pork sandwiches, spaghetti, jambalaya, bottled water, and more.

Dequincy resident and principal of the local primary school Amanda Jackson Guerrero called Dunigan and Hamilton “a godsend.” She is a volunteer at The Pentecostal Church, where she helps coordinate the relief effort. The church created a drive-through pickup for food and supplies. She said her town is dependent on donations from out-of-town people, organizations, and businesses.

When Dunigan, Hamilton, and others come to town, “It means we get to eat that day – a meal that’s not a pack of crackers and a bottle of water,” Guerrero said.

The Lasting Impact of Laura

DeQuincy was wrecked by Laura’s 150-mph winds. Every building in the town was touched by the storm, and the city has been without power for more than three weeks now, with no end in sight. Guerrero said that out-of-town visitors are shocked at the level of devastation – and the resiliency of her community.

“People now are starting to feel the hit in their pocketbooks from running a generator,” she said. “Just running it at night costs an average of $20 a day in gas. That hurts. They don’t have money to run their generators. They don’t have the means to get propane to grill food.

Residents of DeQuincy aren’t waiting on federal or state relief. Able members of her community have been pitching in and helping each other. One group is raising money to buy generators; another drives around town to refuel generators; one cleans yards and cuts down trees; a group has formed to check in on elderly citizens, many of whom lost their homes and are without insurance.

“The people who were hit are also still donating the best we can to make sure those in worse shape than us are getting their basics needs met,” Guerrero said.

Guerrero sang the praises of local officials but said state and federal officials still haven’t come to her town to assess damage or offer relief. When her husband recently called FEMA to ask about the availability of generators, the official in charge asked if they were just for comfort.

“They don’t understand that with our humidity in 104-degree weather, having a box fan isn’t just about comfort,” she said. “It’s a matter of life and death. You’re going to die of a heat stroke or heat exhaustion.”

The Relief Effort Is Ongoing

The people of DeQuincy haven’t seen the type of devastation brought to bear by Laura in decades. The closest any storm has come, Guerrero said, was Rita, which hit 15 years ago. The town took more than two years to return to normal. The damage caused by Laura, she said, was much worse.

Hamilton said seeing the strength of character of people like Guerrero is inspiring, and she will gladly go back to deliver more aid.

“They’re going to need more fencing supplies,” Hamilton said. “That’s the need at this point. If we can get that material donated, we’ll definitely go back.”

Dunigan said he’ll continue to make the drive 30 miles east as long as there are people in need.

“As long as people keep donating, I’ll keep going down there,” he said.

Residents of DeQuincy have a history of helping others in need, and now their generosity is being repaid.

“We have a school that we adopted in Denham Springs when they had a big flood, and now that same school is adopting us,” Guerrero said. “A school in Winnie is adopting one of our schools.”

For Guerrero and others who lost so much during Laura, recovering from the storm will take years – long after the storm is out of the headlines.

“We’re resilient,” she said. “We’ll make it. Amy and Brian, they’ve been such a big help. It’s communities that we have helped or that have been through similar things that are reaching out and keeping us afloat.”

The Helping Hand of Southeast Texas accepts donations via PayPal at PayPal.me/helpinghandsetx.