The Price of Progress: Watching the Collapse of an Industry

This story is the first installment of a two-part Untangled episode exploring the impact of economic changes on communities that depend on a single industry. Both parts are available now:

Lynch, Kentucky -- The baseball snaps into the gloves. Back and forth they throw, father to son, son to father in the Sayler family backyard.

I watch, wondering, amid this lovely scene this past summer, if this family will still live together in Harlan County next summer—or if the father’s job will take them elsewhere. 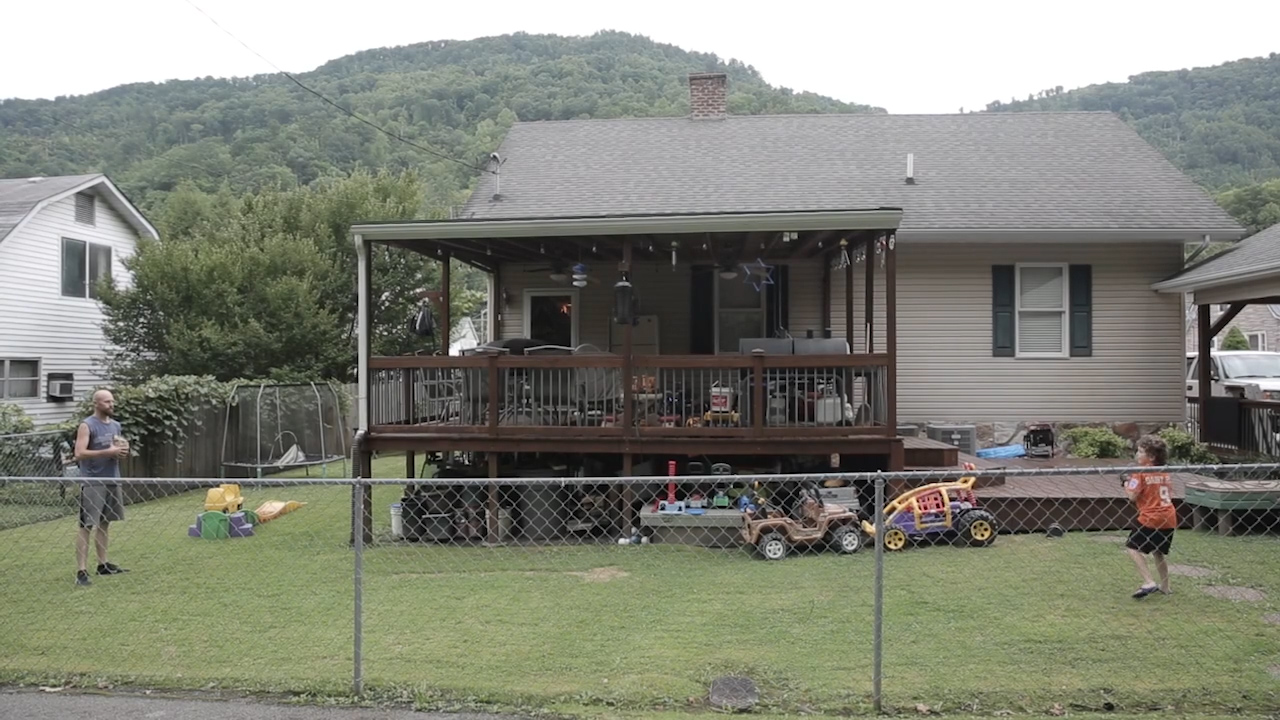 “Have you been hanging out a little bit more with your dad these last few days?” I ask the seven-year-old, named Brycen.

“Bryce, why is Daddy home?” the father asks.

“Oh, ‘cause his job called bankruptcy.”

Looney Creek burbles beside us. We are deep between steep, wooded hills they call hollers here. They're filled with underbrush, bears, snakes, and, for millennia, until recently, ample ribbons of coal.

The dad is 38 years old. He is trim with a shaved head and a thick goatee. His name is Derrick Saylor and he has worked in the coal industry for 19 years.

Until a few days before our arrival in July, he supervised a crew that washes the rock debris and dust off the coal before it’s sent to power plants farther south. Then he got summoned to the plant office. Revelation Energy, one of the nation’s largest coal producers, was filing for Chapter 11.

Like those of his colleagues, his last paycheck bounced. He didn’t know what was going to happen to the health insurance and retirement. However, he was one of the luckier ones—Saylor’s wife is a local teacher. Another mine worker, Jeremy Cornett, told me: “I don't have maybe a hundred dollars to my name. And that's it. Bills are coming up. I have children to feed.” When we talked, he said food stamps might be in the future, and his wife, Cassidy, was applying to work at a local fast food restaurant. 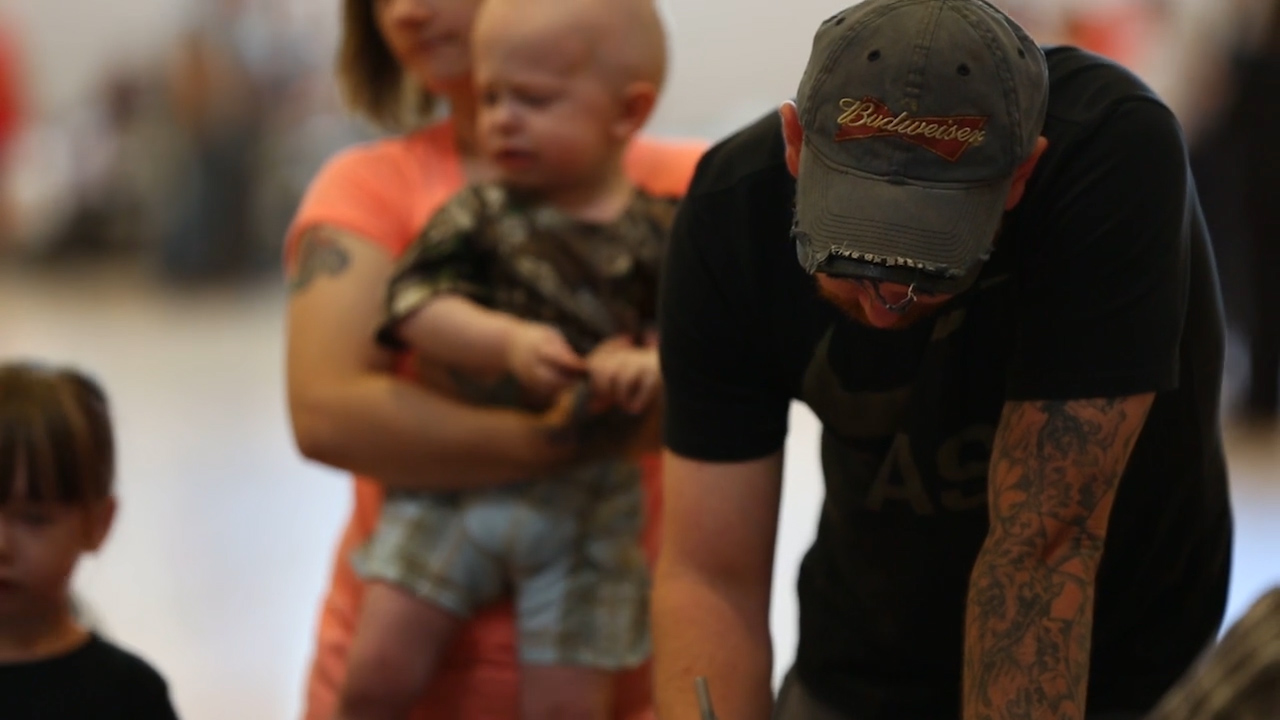 In the months since we left, there was more upheaval, and some stabilizing. Blackjewel, a major employer in the area, tried to move a train loaded with more than one million dollars worth of coal that had been mined before the bankruptcy announcement; miners blocked the tracks.

As of mid-October, the blockade was over, but the train hadn’t moved—a West Virginia bankruptcy court is determining how much back pay Blackjewel employees will get. Then, the train is expected to leave.

Despite the fact that a Tennessee company purchased many of Blackjewel’s assets, not all the miners have returned to work. Cornett told me on Oct. 10 that he was still waiting for word about his employment status, and that his wife found a job at a nursing home. Saylor found work at another mine; it pays more, but he’s on the night shift and the commute is much longer.

What hasn’t changed—and by all accounts, will eventually get worse—is ambiguity in the coal industry.

For generations, coal from Harlan County powered much of this country. However, American coal jobs have plummeted in recent years, under presidential administrations of both parties. You could chalk up the fairly steady coal downturn to government regulations to limit coal’s pollution—or to automation. Lately though, it’s really about economics: the declining price of natural gas.

Conversations about the coal industry have become common political talking points in recent election cycles for candidates on both sides of the aisle. For many Democrats the narrative revolves around the notion that coal miners could simply transition to other jobs, especially in renewables like solar and wind.

“This is a win-win for everybody,” Sen. Elizabeth Warren (D-MA), a Democratic presidential candidate said at the Sept. 4 CNN “Climate Crisis Town Hall”.

By contrast, President Trump during campaign rallies in 2018 touted that “the coal industry is back,” telling attendees at the West Virginia event that “In times of war, in times of conflict, you can blow up those windmills. They fall down real quick. You can blow up those pipelines. They go like this and you’re not going to fix them too fast. You can do a lot of things to those solar panels. But you know what you can’t hurt? Coal.”

Walking through the valleys of Eastern Kentucky, I realized that while coal touches every life there, there is a bigger story. It’s a story far more complex than political campaigns. It is a story we’ve seen before. The story of yet another industrial upheaval -- one you could roughly apply to any number of sectors: cars, retail stores, newspapers.

Nationwide, manufacturing has been among the industries hardest hit by the economic realities of progress. According to data from the Bureau of Labor Statistics, the United States has seen a 27 percent decline in manufacturing jobs since 1990. Texas alone has lost 29,300 jobs in that sector. The chart below shows the impact on each individual state.

I hope this story shows the human dimension to labor reports and political speeches. There’s a price to industrial transformation, what we may call progress. Perhaps, for lack of a better term. It won't happen to just Harlan County or even just coal—it will happen to other lines of work. It will happen to people you know. It may even happen to you.

In the second part of this story, we will tell you about one former coal miner who now makes his living installing solar panels in Kentucky. Weeks of reporting this story taught me that moving from the coal industry to renewables isn’t as neat as some would paint it. There’s nuance. Coal pride runs deep. New jobs aren’t in the same places. Moving from mining jobs to solar jobs often involves a pay cut. Even outside of renewable energy jobs, places like Harlan County has limited resources for other types of economies.

Saylor, the miner playing catch with his son, told me he’d rather not do anything else—even if it means moving elsewhere.

“It's just what I know,” he said. “I feel comfortable doing it. I love doing it. You know, if you don't enjoy your job, then you're gonna find something else to do. I enjoy my job. I like doing it. So, I would love to continue doing it.”

I am not sure what he and his family will be doing next summer, or where he will be. It could be that his old mine reopens, he continues his long commute, or he goes even farther.

His son will be eight by then. That’s a good age. It would be nice to return to Lynch and see them with a baseball hitting their mitts. The sound echoing over the ripples of Looney Creek.

WATCH PART 2: The Price of Progress: Searching for a Clean Way Out