President Joe Biden commended the success of a Sunday airstrike that killed al-Qaida leader Ayman al-Zawahri in Afghanistan, saying Americans and other allies around the world can sleep more peacefully at night knowing he could no longer target innocent lives.

"He carved a trail of murder and violence against American citizens, American servicemembers, American diplomats and American interests,” Biden said of al-Zawahri, delineating some of the attacks ordered by the deceased al-Qaida leader, who he said was “deeply involved” in the 9/11 terrorist attacks.

Al-Zawahri also helped orchestrate the 1998 bombings of the U.S. embassies in Dar es Salaam, Tanzania and Nairobi, Kenya and the 2000 attack on the USS Cole, Biden said Monday.

“He made videos, including in recent weeks, calling for his followers to attack the United States and our allies,” the president noted. “Now, justice has been delivered. And this terrorist leader is no more. People around the world no longer need to fear the vicious and determined killer.”

The White House shared a photo on Tuesday morning of Biden meeting with his national security team on July 1 to discuss the operation to take out al-Zawahiri.

On July 1, President Biden meets with his national security team to discuss the counterterrorism operation to take out Ayman al-Zawahiri. At this meeting, the President was briefed on the proposed operation and shown a model of the safe house where Al-Zawahiri was hiding. pic.twitter.com/W0A0mDk9Lr

"He will never again, never again, allow Afghanistan to become a terrorist safe haven because he is gone and we’re going to make sure that nothing else happens," Biden said, praising the intelligence community's "extraordinary persistence and skill" in launching the successful operation.

On Tuesday morning, White House national security adviser Jake Sullivan told ABC’s “Good Morning America” that “there was nobody on the ground in uniform when this strike occurred.”

Sullivan added that the U.S. government is “in direct communication with the Taliban on this, and I’m not going to telegraph our next moves, but the Taliban well understand the United States is going to defend its interests.”

Current and former officials began hearing Sunday afternoon that al-Zawahri had been killed in a drone strike, but the administration delayed releasing the information until his death could be confirmed, according to a person who spoke to the Associated Press on the condition of anonymity to discuss the matter. 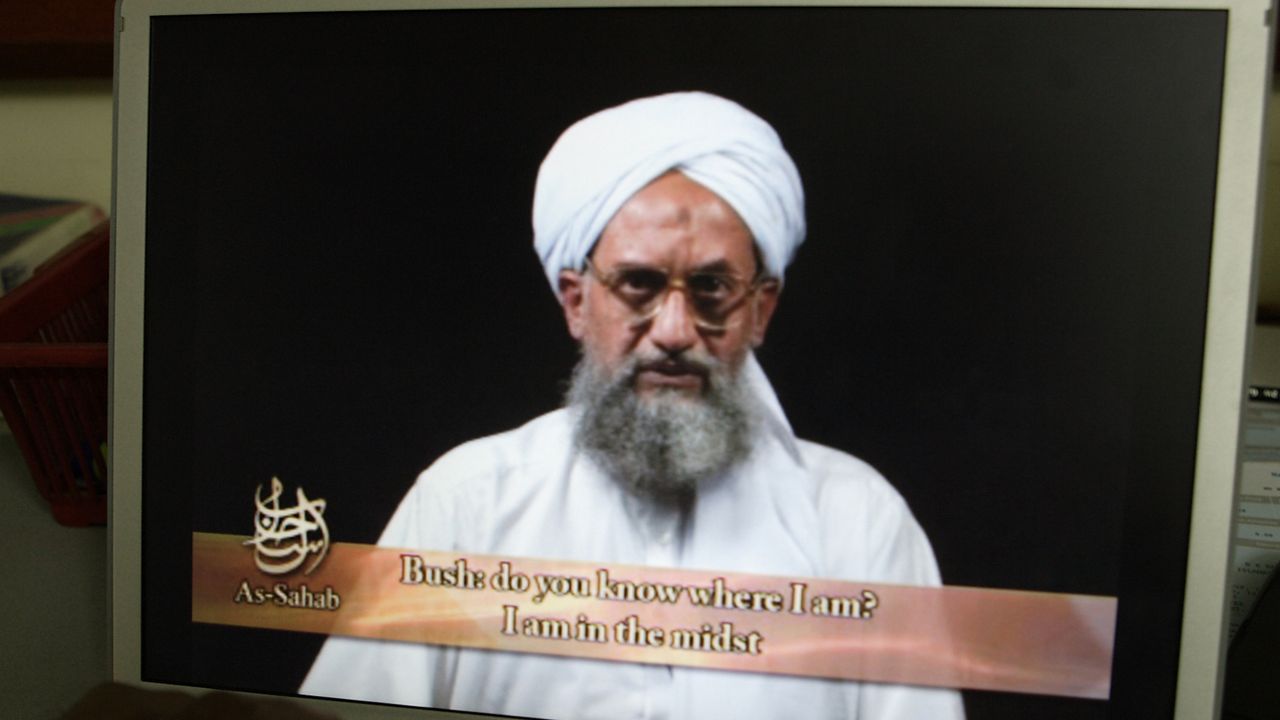 FILE - As seen on a computer screen from a DVD prepared by Al-Sahab production, al-Qaida's Ayman al-Zawahri speaks in Islamabad, Pakistan, on June 20, 2006. (AP Photo/B.K.Bangash, File)

White House officials earlier Monday had acknowledged a strike occurred, ​​saying the “operation was successful and there were no civilian casualties.”

Al-Zawahri took over as al-Qaida leader after Osama bin Laden’s death in a 2011 U.S. raid, and senior administration officials on Monday said the former “continued to pose an active threat to U.S. persons, interests and national security.”

Al-Zawahri’s loss eliminates the figure who more than anyone shaped al-Qaida, first as Osama bin Laden’s deputy since 1998, then as his successor. Together, he and bin Laden turned the jihadi movement’s guns to target the United States, carrying out the deadliest attack ever on American soil — the Sept. 11, 2001, suicide hijackings.

U.S. intelligence, which had long been monitoring for potential signs of al-Zawahri, received information earlier this year indicating he and his wife, daughter and several other family members had moved to a safe house in Kabul.

The house al-Zawahri was in when he was killed was owned by a top aide to senior Taliban leader Sirajuddin Haqqani, according to a senior intelligence official. The official also added that a CIA ground team and aerial reconnaissance conducted after the drone strike confirmed al-Zawahri’s death. Planning for the operation began six months ago, but intensified in the last two months, the official said.

Over the 20-year war in Afghanistan, the U.S. targeted and splintered al-Qaida, sending leaders into hiding. But America’s exit from Afghanistan last September gave the extremist group the opportunity to rebuild. U.S. military officials, including Gen. Mark Milley, chairman of the Joint Chiefs of Staff, have said that al-Qaida was trying to reconstitute in Afghanistan, where it faced limited threats from the now-ruling Taliban. Military leaders have warned that the group still aspired to attack the U.S.

The 2001 attacks on the World Trade Center and Pentagon made bin Laden America’s Enemy No. 1. But he likely could never have carried it out without his deputy. Bin Laden provided al-Qaida with charisma and money, but al-Zawahri brought tactics and organizational skills needed to forge militants into a network of cells in countries around the world.

Their bond was forged in the late 1980s, when al-Zawahri reportedly treated the Saudi millionaire bin Laden in the caves of Afghanistan as Soviet bombardment shook the mountains around them.

Zawahri, on the FBI’s Most Wanted Terrorist list, had a $25 million bounty on his head for any information that could be used to kill or capture him.

“The United States continues to demonstrate our resolve and our capacity to defend the American people against those who seek to do us harm,” Biden said from the White House. “We make it clear again tonight. That no matter how long it takes, no matter where you hide, if you are a threat to our people, the United States will find you and take you out.”

The fact that al-Zawahri was being housed in Afghanistan poses a wrinkle for the U.S. government and its developing relationship with the ruling Taliban, with Biden having removed troops from the country last summer.

Senior Taliban figures were aware of al-Zawahri’s presence in Kabul, according to an administration official, who added the Taliban government was given no forewarning of the operation.

John Kirby, coordinator for Strategic Communications at the National Security Council, confirmed the Taliban was aware of al-Zawahri’s presence in a Tuesday press briefing, saying he would not get ahead of President Biden in judging how the U.S. would react.

"I think the Taliban already has paid a price just in terms of the now very public acknowledgement that they were harboring Zawahri and his family, and that the United States did exactly what the president promised we would do," Kirby said in part.