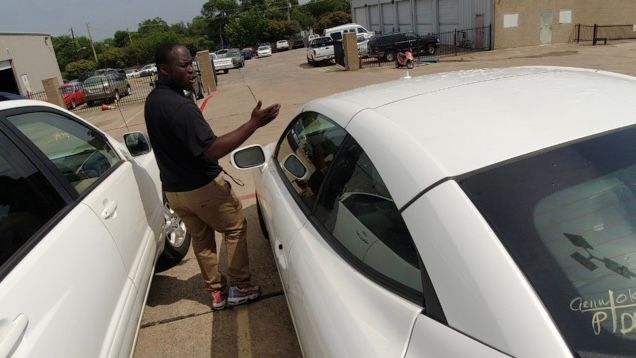 D-Karington “DK” Chaney shows some of the vehicles he's readying for auction at Cars for Kids in Dallas. (Sprectrum News 1)

DALLAS — The supply chain back-ups that are leading to high demand and low supply in the vehicle market may stick around for some time. That’s not just a problem for people who buy and sell cars, but also for the groups out there the rely on them to help others.

The latest estimates from Auto Forecast Solutions show the computer chip shortage continuing and potentially reducing new car manufacturing in the United States by 200,000 units in 2022. That very problem has led a lot of Texas car lots to sit very low on inventory and struggle to get used cars to fill things out.

That problem also rings true at the Cars for Kids lot in Dallas, where leaders say they certainly haven’t been immune to that shortage of vehicles moving in the industry.

“Right now our donations are down, so we need cars now more than ever,” said Cars for Kids Interim CEO Colin Weatherwax.

Cars for Kids certainly differs from other car lots in North Texas; though as all the used cars on their lot won’t be sold traditionally, but will go via virtual auctions they hold on Saturdays — and they’re certainly not selling for a profit.

The organization benefits the Texans Can Academies, schools that provide a high school education for students that have struggled in traditional settings or are in need of a second chance at an education after not graduating the first time.

D-Karington “DK” Chaney can definitely tell people the benefits of that. These days, he works at the Cars for Kids lot taking pictures of the vehicles that come in and helping to prepare them for auction while he pursues his high school diploma. But not long ago, he was without a job and it looked like school was off the table.

“I found myself in a hard spot. Kinda didn’t want to go to school, mom got cancer,” said Chaney.

Chaney dropped out of school to be with his mom and help out at home, but quickly found the decision limited his options severely.

“Malcolm said, ‘I’ll change everything for you,’” said Chaney. “Gave me a job, but you know what the catch was? Can’t get a job unless you go back to school.”

Since then, Chaney has worked at Cars for Kids to help support his family while working toward his graduation, which he’ll finally achieve this winter at a Texans Can Academy.

As Chaney walked the lot taking pictures for the weekend’s auction, there were certainly a lot of noticeably empty spots. But the organization also likely has more spots filled compared to other car lots, since they’re willing to open it to a wider variety of vehicles.

Chaney showed off cars that looked nearly new and worked well, along with others that looked like they weren’t about to drive anytime soon. There were unique vehicles like a World War II-era car, an old ambulance and large motorhomes as well as bikes, motorcycles and boats.

Cars for Kids accepts donations of pretty much any vehicle, running or not, and turns them around for the cause. Chaney said even the rigs in the worst shape tend to find buyers who may just want them for parts or have any other number of ideas for the buy.

Leaders at Cars for Kids said the run on used cars right now has certainly been a challenge as some people that would normally donate have turned to trying to sell instead.

Leaders at Cars for Kids encourage anyone looking to get rid of an old vehicle to give them a look — especially right now, while they’re very in need of inventory to help their cause.

As he took pictures of a Lexus that just arrived on the lot, Chaney couldn’t help but smile. After the organization pulled him up, he said every car they get feels like a great find to him, as he knows the change it can bring to kids' lives.

“Trying to get the money for the kids so they can get a second chance like I did,” said Chaney.