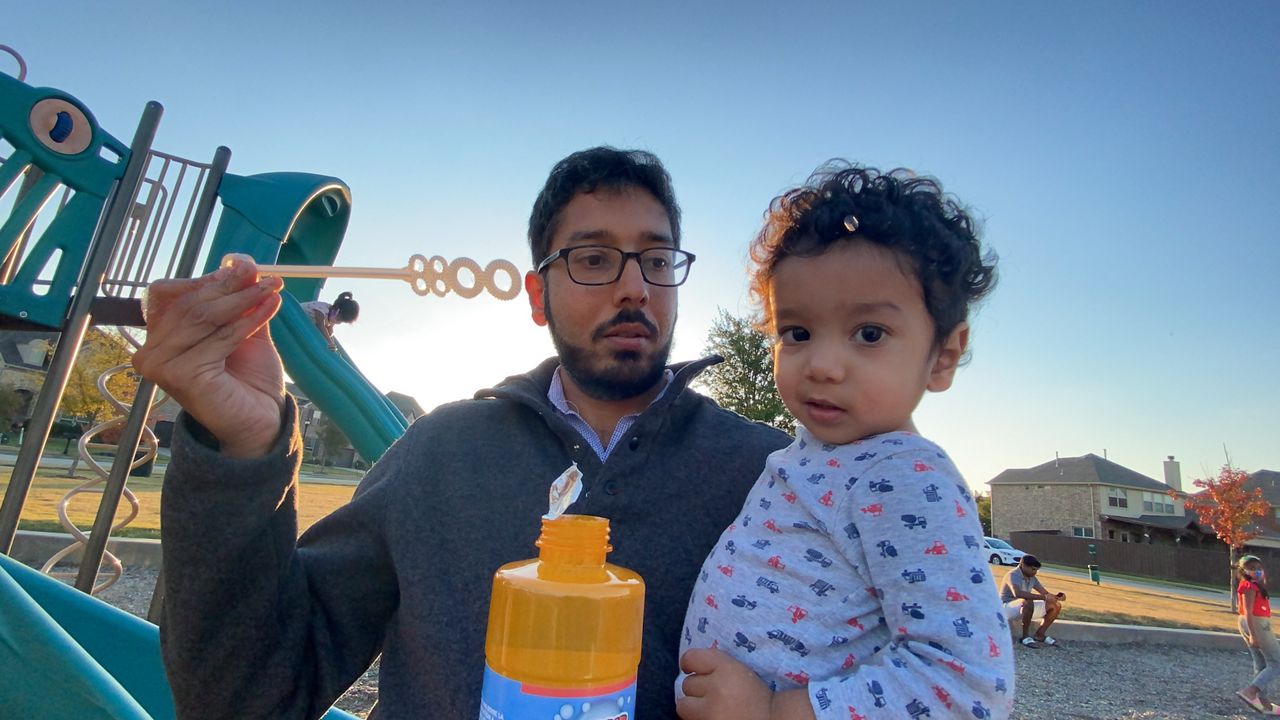 DALLAS — A University of Texas at Dallas bioengineer professor is thankful for the years of research he's spent studying a rare form of cancer called neuroblastoma. In April of 2020, Dr. Shashank Sirsi's son J.D. was diagnosed with the immune compromising cancer at three-months-old.

The pediatric cancer, which affects about 700 to 800 children annually, was first noticed after J.D.'s parents saw a lump around his abdomen. A series of tests later revealed the area was a cancerous tumor. Unlike most parents, however, Dr. Sirsi was very familiar with the cancer diagnosis.

"It was surreal," said Dr. Sirsi. "I was in absolute shock."

For about a decade, prior to the birth of his son, Dr. Sirsi researched how to improve neuroblastoma treatment through image-guided therapeutic​ microbubbles. His research, backed up by the National Institutes of Health, gave him perspective on how the disease progressed, but up until his son's diagnosis Dr. Sirsi didn't realize the heavy toll patients and their families go through while undergoing medical treatments.

"Chemotherapies, those toxic effects are essentially poison that you're putting in your body," said Dr. Sirsi. "You're trying to kill cancer cells, but you're damaging healthy cells."

Although children are better off recovering from chemotherapy than adults, Dr. Sirsi said it was challenging to witness all the pain his son had to go through in order to feel better.

"He's inspired me to think more clinically about what children go through, what parents go through and how we can alleviate that suffering," said Dr. Sirsi. "When we're coming up with a strategy or therapy trying to design a new way of treating neuroblastoma, I always ask the question, 'Would I give this to my son?'​"

It's a question Dr. Sirsi has challenged his bioengineering students to think about. Fourth year PhD student Aditi Bellary is studying on how to deliver image-guided therapeutics targeting the cancerous tumor. She said after witnessing the resilience Dr. Sirsi went through last year, she began to think more from a patient perspective in her studies.

"Narrowing that gap between the bench, where we work as researchers, and the bedside, what patients experience. There's quite a big disconnect." said Bellary.

Dr. Sirsi said fate may have led him to the understanding he now has today.

J.D.’s cancer was diagnosed around the time the nation went into lockdown due to COVID-19. Dr. Sirsi said the extra precautions they had to go through is something he’ll always hold near his heart.