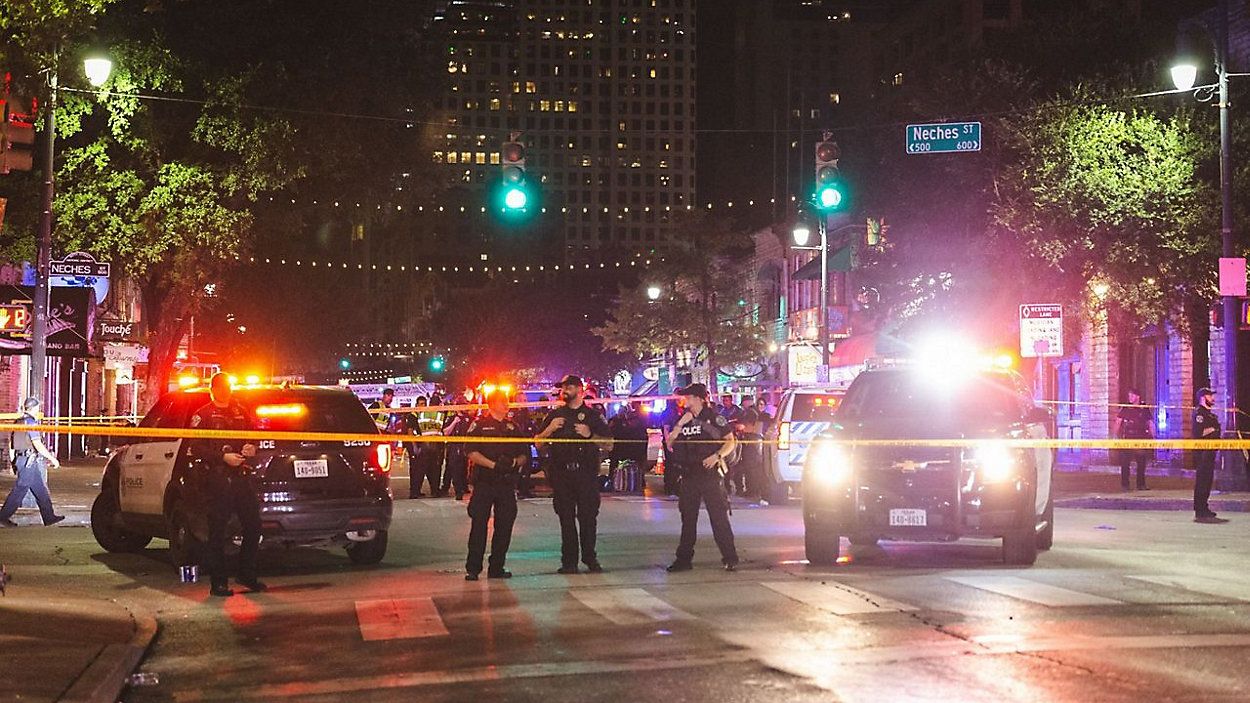 Police and a barricade are visible on 6th Street in downtown Austin, Texas, following a shooting that injured 13 in this image from June 12, 2021. (Courtesy: Metro Video Services, LLC.)

AUSTIN, TEXAS — After this past weekend’s mass shooting in Austin, lawmakers are in disagreement over how to improve public safety.

While some argue that access to guns is the problem, others say cities like Austin aren’t investing enough in their police departments.

Twenty-two-year-old Noah Ramirez was on 6th Street early on Saturday morning when what started as a fun night with friends quickly turned into a scene of panic and chaos as gunshots rang out.

“People running everywhere, cops flying in with their weapons drawn, seeing the bodies on the ground and bleeding and just screaming," said Ramirez.

He shot video of the scene, moments after 14 people were shot. We now know one of the victims has died.

“Knowing that somebody has actually passed away, and how tragic that is, and seeing that we were that close it's ... hard to comprehend or fathom that that could have been a reality for my family," said Ramirez.


“Gun violence is preventable," said Gyl Switzer, executive director of Texas Gun Sense. "I think it's always always important to ask, when a person who's prohibited from having a gun, how they got it. Texas does not require background checks on all gun sales. Also, Texas, has preemption for gun policies by the Legislature, which means that local entities cannot make any gun restrictions. So, at a busy time in a busy city, we still can't at the local level make laws that make sense about guns."

However, supporters of the permit-less carry bill say it’s not relevant to the weekend’s mass shooting.

“It’s preposterously improbably that the gun law has anything to do with the shooting because it’s simply not signed into law yet," said state Sen. Paul Bettencourt, R-District 7.

Bettencourt says the problem is rooted in police funding. Austin City Council previously diverted a portion of the police department budget to other community resources.

“They're just not applying the resources to the problem we need, and what we need is for the City of Austin is to step up and start taking care of their citizens again put money back into the police force," said Bettencourt.

Over the weekeend, Austin Police Department interim Chief Joseph Chacon said in a press conference that the department is continuing to struggle with staffing shortages due to significant vacancies.

"I had five shifts of officers that were working when this happened. That is not unusual, and we staffed them fully," Chacon said. "I'll just tell you that it's making it very hard for us to continue to staff at these levels, even if we offer overtime to our officers."​

Mayor Adler says while it's important to work with the police department to get staffing to the appropriate level, the core of the public safety issue in relation to the weekend's mass shooting comes down to access to firearms. ​

“The police chief had extra officers on duty, and even with all of those officers there you can't stop this kind of shooting. It’s about - we have just too many guns. Doug Kantor died, was killed on our streets, at the hands of two people because they had guns they shouldn't have," said Adler.