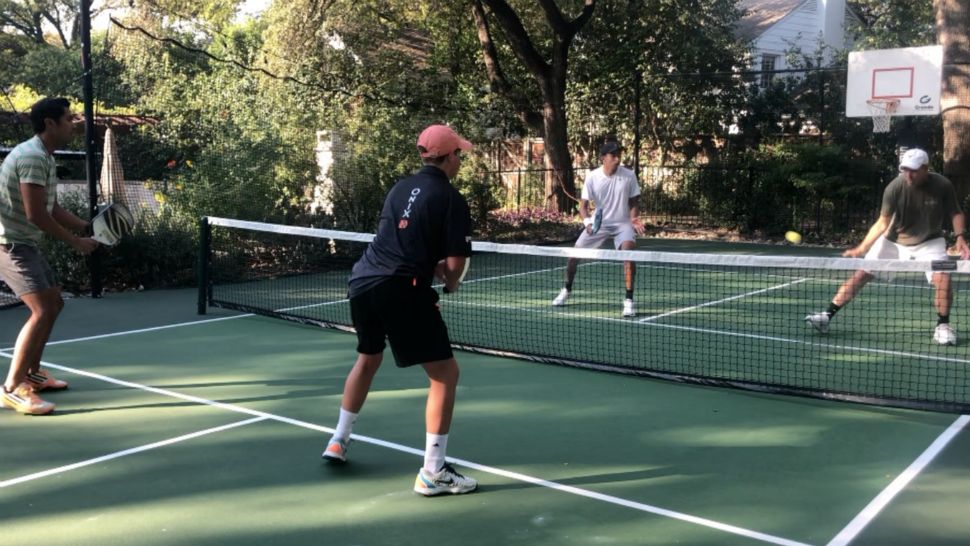 AUSTIN, Texas — You'll most likely find Wyatt Stone with a paddle in his hand. He used to play lacrosse, baseball, basketball and football, but not anymore.

"I pretty much dropped all those," Wyatt said.

He picked up pickleball thanks to a group of ladies who call themselves "The Pickleball Grannies". Pickleball is a combination of tennis, badminton, and ping-pong.

"We had a rec center open up about 2.5 years ago, and I went there," said Wyatt. "Some nice ladies dubbed themselves the Pickleball Grandmas and they helped me get into the game. And then we got hooked up with a coach and I trained with him and played in my first tournament somewhere in January of 2018, and took home three gold medals," explained Wyatt.

A few years and a lot of medals later, Wyatt now travels across Texas, and the county, playing competitive pickleball.

In 6th grade he decided to be homeschooled so he could spend even more time out on the court. He takes online school with him, no matter where he is, whether in coffee shops, or in the car with mom at the wheel. The two of them spend a lot of quality mother-son time in this car, sometimes on road trips up to 22 hours long.

"If you would have asked me that a year ago I would have said, 'I'm never doing that,'" Ashley said.

She says it's what she has to do in order for Wyatt to play against people at his same level, partly because the competitive field is so small.

"In the beginning, when Wyatt started playing pickleball and they didn't have any kids playing, we would have to get exceptions from tournament directors to even allow him to play," Ashley explained. "In Texas, the thing that's lacking is public courts."

That's why pickleball players will oftentimes meet up at private courts. Mom spends a lot of time on the sidelines, but never cheering too loudly.

Pickleball is growing in popularity in cities all across Texas and across the nation. USA Pickleball says the sport has grown 30% over the past three years.

Legend has it, the sport came about in 1965, when three dads on a ferry ride in Seattle were trying to entertain their bored kids. It started with some simple handmade equipment, and took off from there.  There are a few differing tales when it comes to how the sport got its name.

The first is that one of the founding fathers' wives started calling the game pickleball because the combination of sports reminded her of the pickle boat in crew where oarsmen were chosen from the leftovers of other boats.

The second story is that the sport was named after another one of the founding fathers' dogs, whose name was Pickles. Both could very well be true,or not, but regardless, the name stuck.

According to the Sports and Fitness Industry Association, there are 3.3 million pickleball players today.

The SFIA says about 65% of those core participants are 55 and older.

You can find Kathy Ford and Jo Trammell sipping smoothies, chatting with friends, on a Tuesday afternoon. Both women say the decision to call it quits at work took a while to ease into, but they found a new passion in life with pickleball.

"When you do it, you have to work into being comfortable at basically your new job," Trammell says.

"You're reinvented by new interests or things you didn't have time for," adds Ford. "I heard these balls bouncing and decided, 'I'm gonna play that game!'"

"I was in flip flops and someone handed me a paddle and said, 'You're going to love this sport,' and I've been playing ever since," says Trammell.

The two were strangers just two years ago, but they’re now partners. They travel together, eat together, and on the court, they go through all the ups and downs together.

"If she does something that freight trains me over, you just kinda have to roll with it and laugh at it, paddle tap and move on!" Trammell laughs.

While they both love the game,  for them it's so much more than just a paddle and a ball.

"I love tournaments, but I love the friendships I've made," Trammell says.

They say pickle ball has welcomed them into an entire new community.

"We play with all different ages, so it's not like my partner and I only play with people our age, we're playing with people in their 30s, their 40s, their 50s," Ford says.

Proving no matter your age, with each new stage of life comes new beginnings, just waiting to be picked up. ​

"Coming into this we were like 'what are we going to do?' We just retired -- and we found pickleball!" Trammell says.