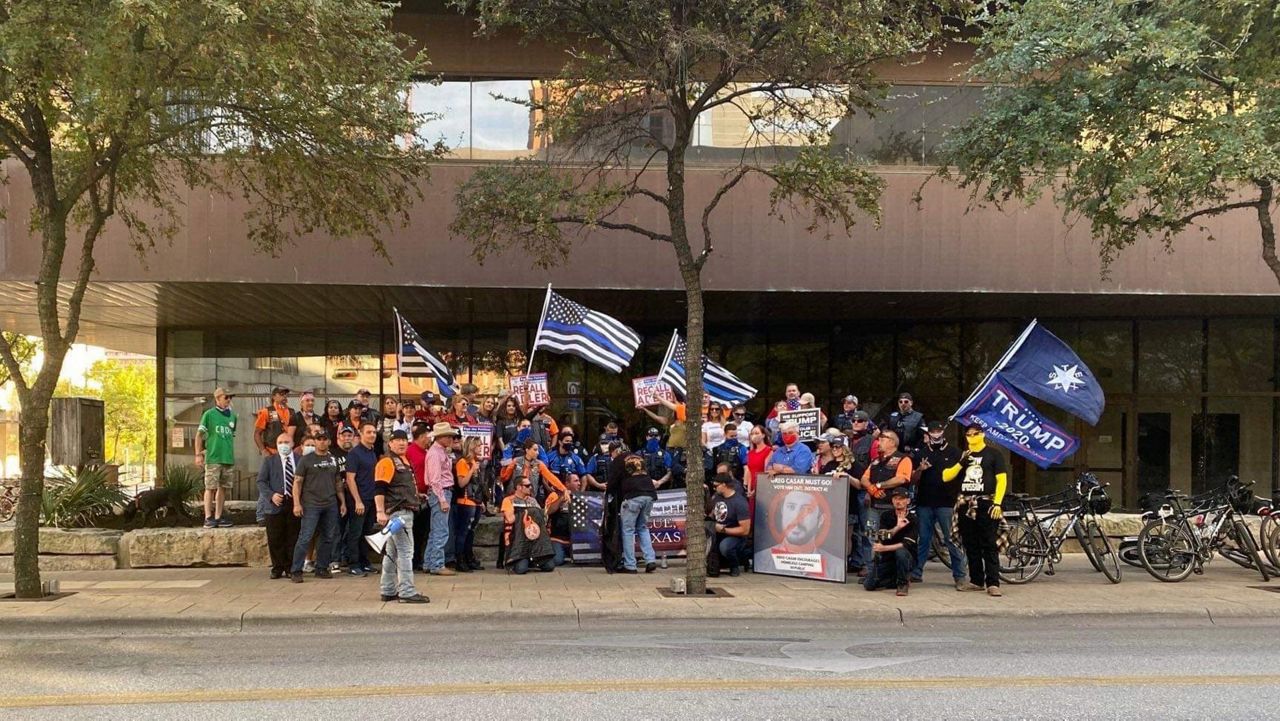 AUSTIN, Texas — A photo taken this weekend at a pro-law enforcement rally in Austin is getting a lot of attention online for including a number of people holding up white supremacist hand signs.

But the organizer of the event says that’s not the full story, saying he didn't know that the three men in the photo were affiliated with the Proud Boys, or that they were holding up white supremacist hand signs when the photo was taken.

47-year-old Luis Rodriguez organized the rally, and is the president and co-founder of a group called Wind Therapy Freedom Riders, which hosted the event.

He started the group about a year and a half ago as a social riding club for motorcyclists, but it also supports social issues including ending teen bullying, promoting motorcycle safety, and supporting law enforcement and the military.

On Sunday the group held a pro-police event at Austin City Hall.

But a photo from the event quickly gained attention online, garnering plenty of criticism and condemnation.

It includes Wind Therapy Freedom Riders, officers with the Austin Police Department, two city council candidates, several political posters, and in the corner, three men affiliated with the Proud Boys holding up what the Anti-Defamation League defines as a white supremacist hand sign.

The Southern Poverty Law Center defines the Proud Boys as a hate group.

Rodriguez says he wasn’t familiar with the group or the hand sign until after the photo was taken, and that those three people are not affiliated with the Wind Therapy Freedom Riders.

“I personally spoke to them and told them that is not to be tolerated we have zero tolerance for things like that. That is not what we stand for, it's not in our values and our core beliefs. We are here to back our law enforcement, back our military, protect our kids," said Rodriguez.

The Austin Police Department said on Twitter that it is looking into the incident. According to the department’s general orders, uniformed officers are not allowed to appear in photos endorsing or supporting any political or social campaigns without permission from the chief.

Rodriguez hopes the officers won’t be punished for appearing in the photo.

“I will completely take the blame for that, for not knowing who the Proud Boys were, and that's fine, blame me, but the one people that you can't blame are the officers," said Rodriguez. "If we see groups that counter our interest or they're not of our same values and beliefs we will make sure that they know that they're not welcome or invited to our events.”

Of the two city council candidates who appeared in the photo, only one responded to our request for comment.

Louis Herrin is running for the Austin City Council District 4 seat and says he does not support the Proud Boys and was only at the event to support law enforcement and the Wind Therapy Freedom Riders. Mackenzie Kelly, the other candidate, did not return our request for comment.

The Austin Police Department released a statement on the issue, saying, "On Sunday, November 1, APD officers were working to provide a safe environment for a peaceful protest coordinated by the Texas Police Spouses Association and Wind Therapy Freedom Riders. At the end of the event, several officers, who we are working to identify, were asked to take a photo with participants which is not an uncommon request from the community.

We are aware of the concerns raised by this photograph and have launched an Internal Affairs investigation to determine any potential violations. APD policies 801.6 and 972.4.1 address endorsements and political activity. We have specific guidelines, and all officers should be aware of these policies. As a reminder, we are sending a training bulletin to all APD officers and employees, to help remind them of our department policy.

APD is committed to fair, impartial and equitable treatment of all people. We do not justify or condone political activities in uniform. Given the politically charged climate we will be advising officers to exercise additional caution when engaging with the public to ensure the uniform isn't used – either directly or inadvertently – to imply support or opposition of a particular perspective."