TEXAS — According to an investigation, it was foggy early on the morning of August 27, 1990, when Stevie Ray Vaughan and four others died in a helicopter crash while leaving the Alpine Valley Resort in East Troy, Wisconsin.

With that, the life of one of the most influential and talented blues musicians the United States ever produced was over.

Born in Dallas, Texas, in 1954, Vaughan took up the guitar at age 7. In 1972, he dropped out of high school and relocated to Austin where he began playing paying gigs and in 1978 formed the band Double Trouble.

Generally regarded as one of the greatest guitarists of all time, Vaughan’s preferred instrument was a Fender Stratocaster, and his fluidity and ability to improvise with it was noted. Eric Clapton in an interview once described him as an “open channel.”

Influenced by blues and rock musicians including Jimi Hendrix, Freddie King, B.B. King, Buddy Guy, and, perhaps most notably, Albert King, Vaughan took a step toward mainstream success when in 1982 he appeared with Double Trouble at the Montreux Jazz Festival.

David Bowie happened to be in the audience and subsequently hired Vaughan to play on his 1983 release, Let’s Dance.

Vaughan’s popularity grew when in 1983 he and his band released their debut, Texas Flood. A series of television appearances and high-profile shows followed, and Vaughan headed a blues revival in the 1980s, doing for the United States what artists including Gary Moore and Rory Gallagher did for Europe.

Vaughan battled drug and alcohol addiction for much of his life. He completed rehabilitation in 1986, however, and continued performing. In 1989, he released his last album, the lauded In Step.

Thirty years later, Vaughan continues to influence musicians and is closely identified with the Texas music scene. Guitarists from John Mayer to Kenny Wayne Shepherd have adopted some of his style.

Located on Auditorium Shores, on Lady Bird Lake in Austin, you’ll find the Stevie Ray Vaughan Memorial. The bronze statue was fabricated in 1993 and installed in 1994. Maintained by Austin Parks & Recreation, the memorial remains a popular tourist destination. 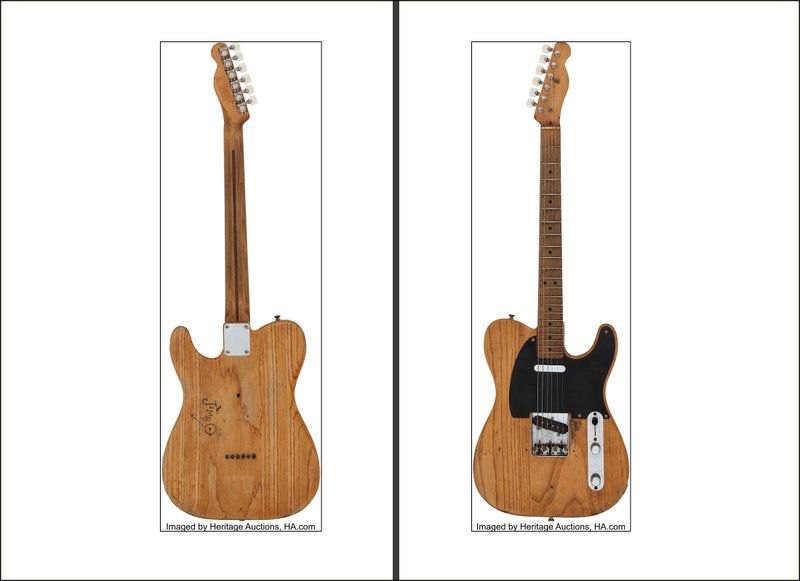 A Fender Broadcaster given to Stevie Ray Vaughan by his brother appears in this file image. (Associated Press)