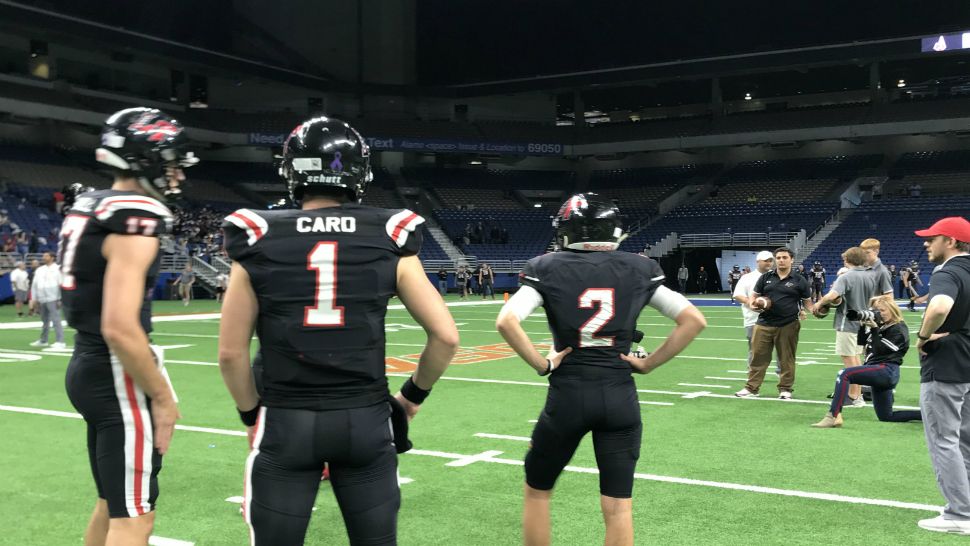 Lake Travis quarterback Hudson Card appears with two of his teammates on the field in this image from December 2019. (Travis Recek/Spectrum News)

AUSTIN, Texas -- If you follow high school football in Texas, you know that Lake Travis is a quarterback rich program. Over the years they’ve had guys like Garrett Gilbert, Baker Mayfield and Charlie Brewer. Their starter is almost always really good, and sometimes their back-up is another big-time player, just waiting his turn, like this year.

“We’re very fortunate to have depth at quarterback. I don’t know of anybody else that has that luxury,” said Lake Travis head coach Hank Carter.

This season Carter has Hudson Card as his starter. Card is one of the top prospects in the state and a future Texas Longhorn. He was having a great senior season until suffering a toe injury in mid-October.

“I was pretty devastated. Obviously I didn’t want to end my senior year like that,” Card said.

At first Card thought he would miss the rest of the year, but after getting a second and third opinion on his injury, doctors determined he wouldn’t need surgery. But he would be out for about six weeks. That meant Lake Travis needed their backup QB to step in, junior Nate Yarnell.

“That was a crazy experience and week and came out of nowhere,” said Yarnell when he heard the news. “I just did my best to carry the team.”

Yarnell did just that. He led the Cavs to six straight wins, including three in the playoffs. The whole time, seeking help from Card who was never far away.

“So helpful, always there in practice and the first guy to greet me in games,” said Yarnell.

“He’s a great player and stepped up big for us,” added Card.

Last week, marked six weeks since the injury and it was time for Card to come back as the starter.

“I’m more than happy for him and anything to bring success to this team is awesome for us,” said Yarnell, who returned to being the backup.

In his return, Card threw for three touchdowns and had a rushing TD, leading Lake Travis to a win over Judson.

“It meant everything. That was my goal to get back on the field with my brothers,” said Card.

Now the goal is to get this team to the state championship game next week. First, though, Lake Travis will have to beat North Shore this Saturday, the same team that knocked them out of the playoffs last year.