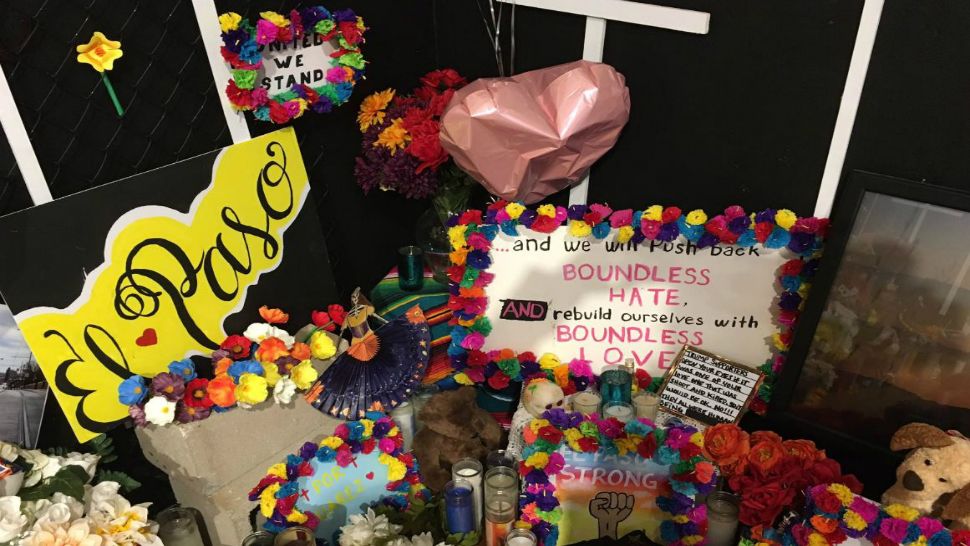 An ofrenda that memorializes the victims of the El Paso mass shooting appears at the Mexic-Arte Museum in Austin, Texas, in this image from November 1, 2019. (Victoria Maranan/Spectrum News)

AUSTIN, Texas -- Three months may have passed since 22 people were murdered in an El Paso Walmart, but El Pasoans all over the world still feel the pain that was inflicted in their hometown.

That includes those who live in Austin, some of whom took it upon themselves to remember the victims, especially for Dia de los Muertos—the Day of the Dead. One of them is Nikki Diaz, whose brother was working at that Walmart.

"It felt like an attack on my safe space, you know? I never thought it could happen there," she said.

Her brother made it out safely, but it didn’t spare her from the sorrow that swept through her community even 500 miles away.

"I was reaching out to everyone in El Paso to see how I could help,” she recalled. “I remember feeling kind of helpless being stuck here in Austin."

But that feeling didn’t last very long. Mexic-Arte Museum’s Jose Martinez, also from El Paso, put out a call for El Pasoans in the Central Texas area to help build an ofrenda—or altar—as a tribute to the shooting victims.

Diaz jumped on the opportunity.

"I'm a painter so, I thought, that's what I can offer,” she said. “My painting skills."

Meet the two El Pasoans who helped build the #DiaDeLosMuertos ofrenda @Mexic_Arte in remembrance of those who died in the #ElPaso shooting. TUNE IN @SpecNewsATX & @SpecNewsSA for their stories. pic.twitter.com/O8PoWLWyvi

She, Martinez, and dozens of fellow El Pasoans spent days at a museum building the altar, which included El Paso iconography like the Star of the Mountain.

"We recreated some signs from the actual memorial site and the painting the sunset, which was probably the most challenging part," Martinez said.

Diaz took on that challenge, painting, not only the El Paso side of the border, but also Juarez—where most of the shooting victims were from.

"I feel like El Paso and Juarez are like one city, really, and we really want to represent that," she said. “It's actually very healing to do. It was like therapeutic to come here every day and just focus on this."

"I'm proud to be from El Paso and I just wanted to do the best job that I could," Diaz added.

The ofrenda will be on display at the Mexic-Arte Museum until November 24.

Even if you’re not from El Paso, you’re invited to participate and pay tribute to your loved ones. You can leave photos, unlit candles, flowers, and stuffed animals at the altar. They only ask you not to bring food, unless it's in protective packaging.