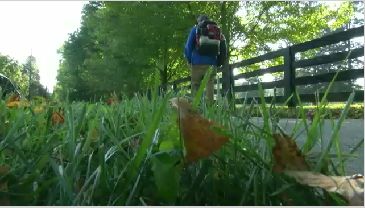 FRANKFORT, Ky. -- There's a pre-filed bill in the Kentucky legislature, that would make it a costly offense to leave lawn clippings behind on the highway. The bill, filed by State Representative Regina Huff (R- Whatley) is BR 208, which makes grass clippings on highways 'Criminal Littering' and a Class A Misdemeanor, punishable by nine to 12 months in jail and a fine up to $500. Some lawncare professionals are supportive of the idea.

Walker Rose is one who's supportive of a strict penalty for leaving grass on roads. Rose owns Local Lawns, LLC., in Louisville. His staff are careful not to chute freshly cut grass into roads, using a guard on mowers. Rose believes the clippings can be dangerous to certain types of drivers, when left behind.

"We see a lot of bicyclists, and I think that's one of the main threats of the grass being in the road, to them. You know, they have very very thin tires they're riding on," Rose explained, adding, "there's also the chance that debris could be caught and thrown onto a car or you now, a person walking."

Rose also feels the penalty could further legitimize the lawncare industry, by weeding-out those less than professional, who aren't as careful with the clippings.

"The lawncare industry as a whole is seen as, uh, I think a bunch of rednecks kind of running around cutting grass, and anyone can do it," said Rose.