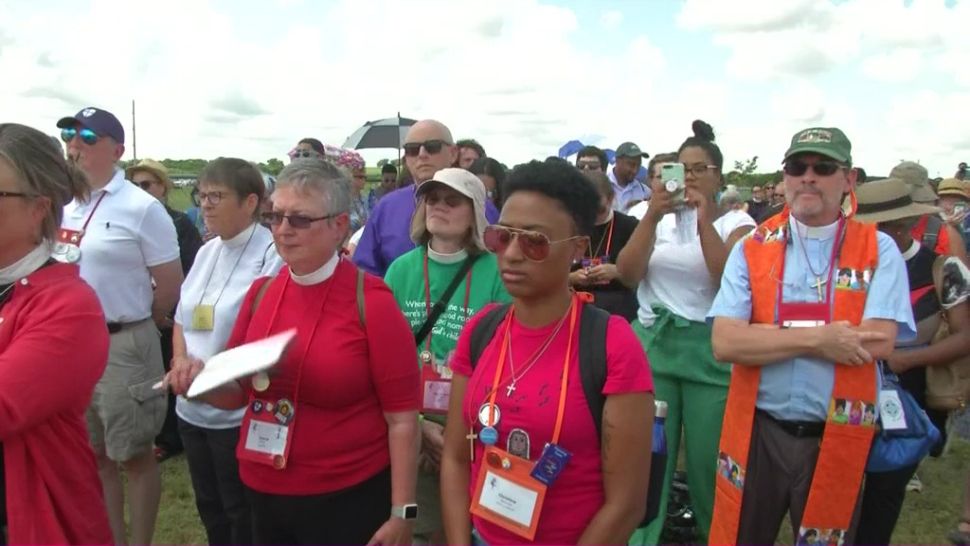 TAYLOR, Texas  -- Thousands of Episcopalians from around the world are in Austin for a international convention and many are using their time in Texas to talk about the immigrant crisis.

Less than two months ago, Presiding Bishop Michael Curry of The Episcopal Church delivered a moving sermon at the Royal Wedding. On Sunday, he continued his message of love.

“The way of love, calls for us to be humanitarian. We come because, we don’t believe that a great nation like this one separates children from their families,” said Curry.

Curry was speaking a prayer service outside of the T. Don Hutto Residential Center in Taylor, where migrant women are detained. The detention facility is riddled with abuse allegations and is under investigation by the FBI.

“It felt downright, un-Christian to sit in Austin in our beautiful ballrooms and hotels suites and make pronouncements about the state of the world, while such a horrible injustice was happening from a few miles away,” said Rev. Megan Castellan of St. John's Episcopal Church of Ithaca, New York, and one of the service’s organizers.

Congregant offered their prayer and support.  The service comes less than two weeks after Williamson County Commissioners voted to terminate its contracts with ICE and the private-prison company, CoreCivic, over operations there.

“The stories coming out are an abuse of power, failed legal process, women being separated from their children, children being treated as if their unaccompanied minors when they’re standing with their mothers, this is not how we want our America to be,” said DeDe Duncan- Probe of the Episcopal Diocese of Central New York.

Episcopalians in attendance want better treatment of asylum seekers and reunification of families.

Bishop Curry also spoke about the State of Liberty and how it represents a call to welcome and asked people to live up to that spirit.

The FBI is currently investigating allegations of sexual assault at the Hutto Residential Center. Williamson County's contract with ICE and the private prison company CoreCivic ends in January.