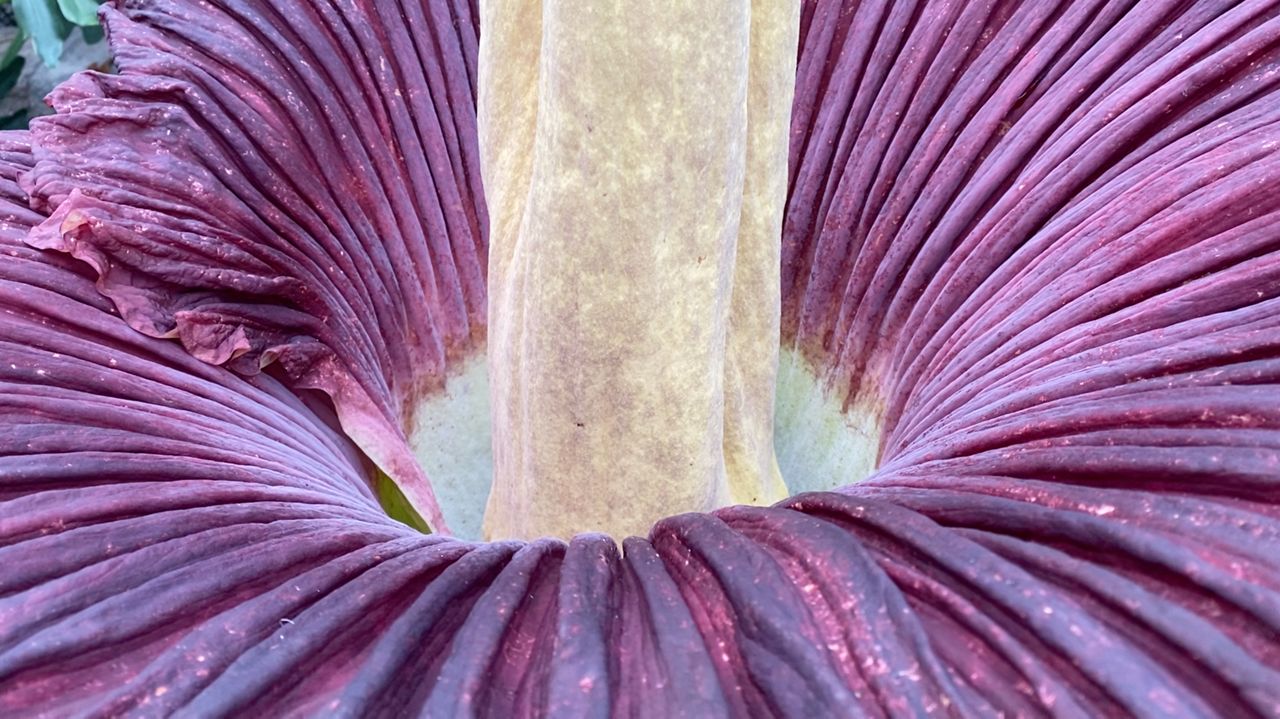 What’s all the stink about? Corpse plant blooming at N.C. State

RALEIGH, N.C. — It’s not often people line up to get a whiff of something bad. It’s also not often that the Amorphophallus titanium blooms.

This unusual plant is also known as the corpse flower and gets its name from its smell of rotting flesh. Known as Lupin, bloomed for the third time on Tuesday.

Brandon Huber, a horticulture scientist, is the owner and grower of Lupin. Huber acquired Lupin in 2010 from the Huntington Botanical Garden in California.

“I got into horticulture at a young age, maybe seven or eight. I was always fascinated by plants that were unusual or weird, like cactus and succulents,” Huber said.

Huber, who is from Philadelphia, brought Lupin with him when he moved to Raleigh in 2014. It has since been living in the Marye Anne Fox Science Teaching Lab at N.C. State where Huber attended graduate school.

“I was about 14 years old when I flowered my first corpse flower, a different species than this one here, and it was at that time after blooming that I wanted to bloom the world’s largest,” Huber said. 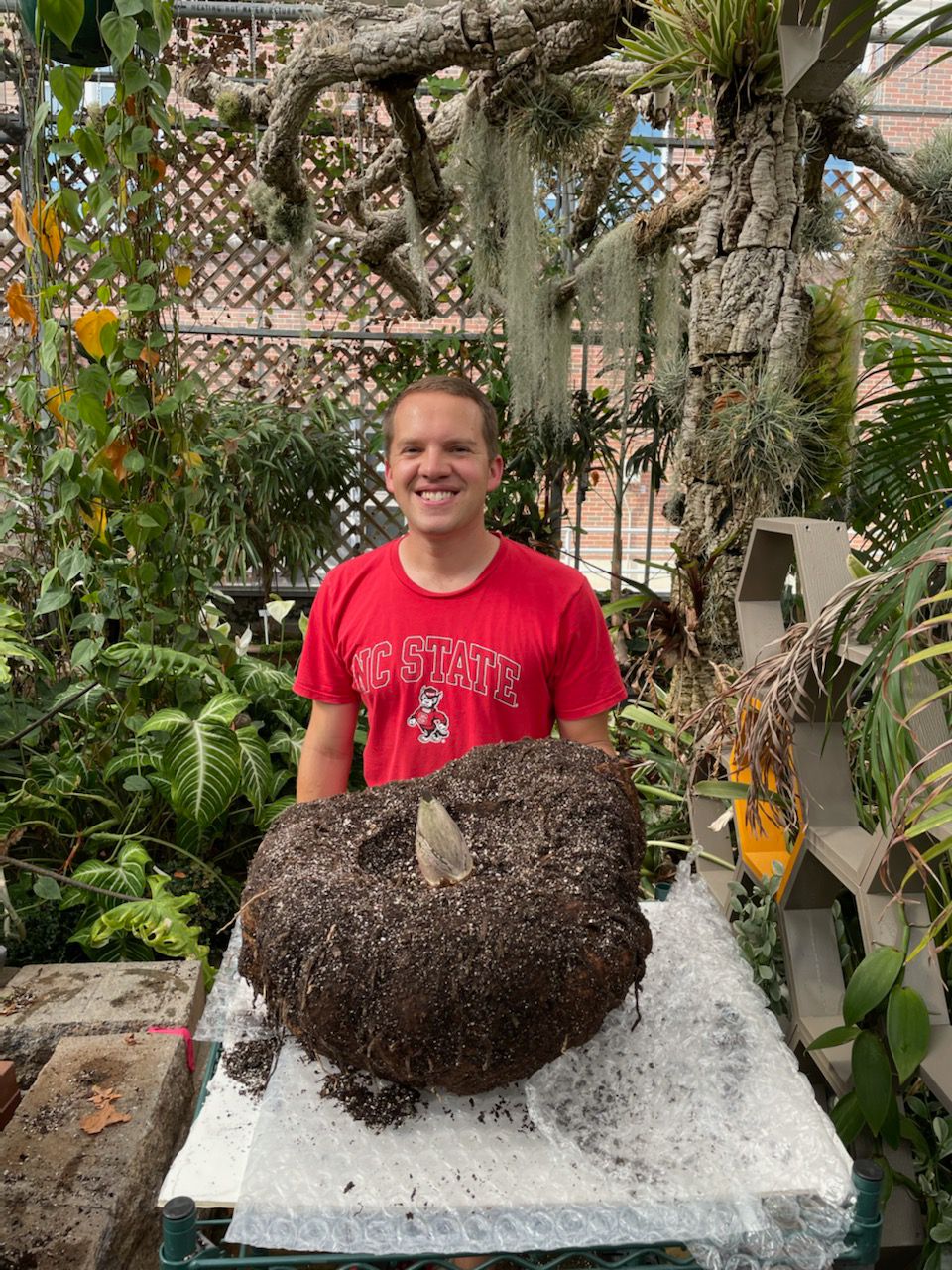 The life cycle of an Amorphophallus titanium, the Titan Arum.

“It took 13 years this time to flower. It’s the world’s largest flowering species, so usually it takes 10 to 15 years. After that, it can reoccur flowering every three to five years,” Huber said.

This year, it's blooming a little early and is just over four feet tall. Huber says during its last few days before flowering, the plant can grow up to three inches a day.

Aside from the corpse plant taking the reign for the largest unbranched inflorescence in the world, it is also the smelliest, where it gets its name.

“It mimics the smell similar to road kill or a rotting corpse. Basically, this smell is very interesting because it’s a pollination mechanism,” Huber said.

Unlike plants that attract bees to pollinate, the corpse plant releases a smell to attract flies and beetles. As it blooms, it heats up to human body temperature which allows its smell to travel further to attract pollinators.

Huber says once the plant blooms, it will only stay open for 24 to 48 hours. 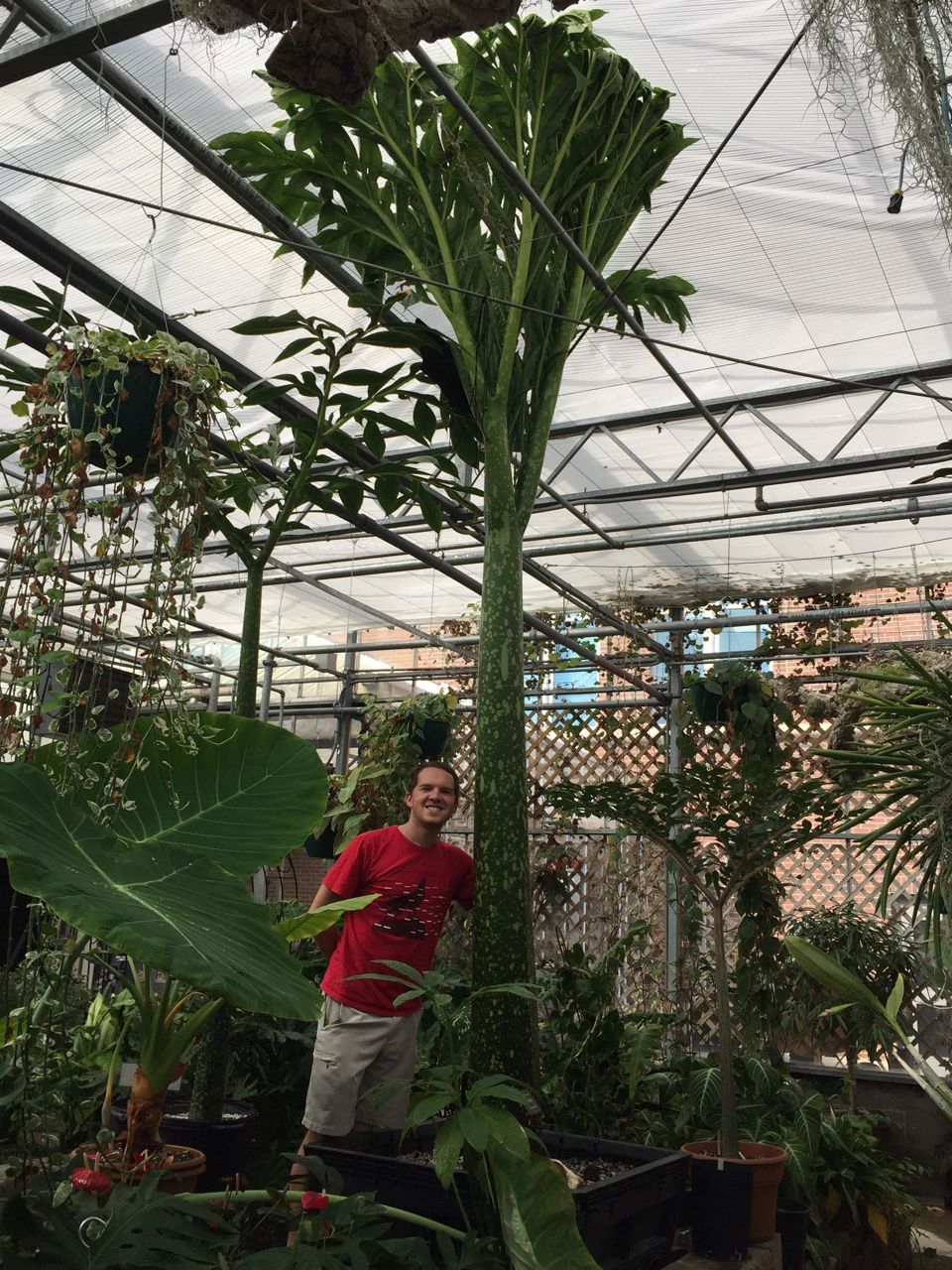 “This thing will actually wither and collapse shortly thereafter, so it’s a very long process to develop one of these flowers,” Huber said.

The plant has an interesting life cycle producing one large single leaf at a time and during that time it can reach ten to 15 feet. Huber says during the last leaf cycle, Lupin expanded through the roof of the greenhouse at NC State.

After the leaf cycle, which lasts between 15 to 16 months, the plant will go dormant. Following this, it can either grow another single leaf or bloom.

Traditionally, corpse plants live on the outskirts of rain forests. According to the International Union of Conservation of Nature, the corpse flower is listed under endangered with less than 1,000 remaining in the wild.

The College of Agriculture and Life Sciences opened a viewing to the public, registration is required. Here is where you can sign up to see Lupin in bloom.

The last day to get a whiff of the plant is Friday before it withers up to restart the life cycle.

A live feed of the corpse plant is available to watch online.