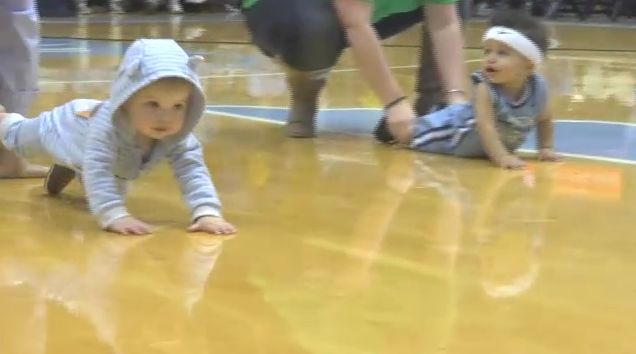 Babies on their marks for college money

CHAPEL HILL -- A lucky set of parents got a head start on their infant's college savings on Saturday all because their kid knew how to crawl quickly.

The Diaper to Dorms Dash had five babies race during halftime of the UNC-Wake Forest game for an NC 529 college savings account with $529 already in it. The College Foundation of North Carolina says they thought up the idea to get parents thinking early about college.

"We want people to think about starting to save for college when their kids are just little bitty babies like these crawlers we had today," said Laura Morgan of the College Foundation of North Carolina. "This was a perfect match for our mission."

The winner of the race was Maverick Steele. Steele's parents Taylor and Andrew say they're happy he won and that they already have the college where they want him to go picked out.

"We both went to Carolina and we're hoping that he gets to do that one day as well," they said. "This is a great opportunity to start saving for his college education."

The other participating parents still received an NC 529 account, but with $25 inside. The College Foundation say they plan to do another Diaper to Dorms Dash during an NC State game.