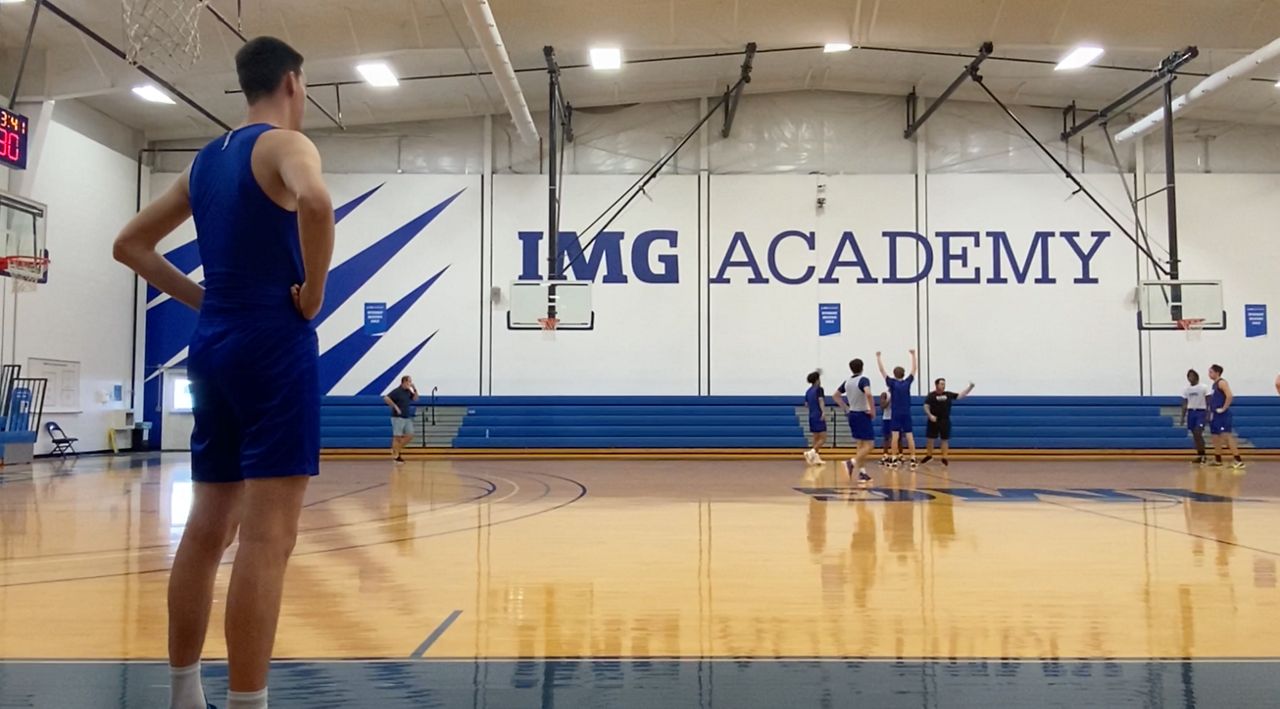 BRADENTON, FL. - Believe it or not all three of the men are at least seven feet tall. Of course, it’s easy to second-guess yourself, especially when one of them is 7 foot 5. That’s Olivier Rioux, the Canadian big man who enrolled at IMG Academy this year, in hopes of improving his game.

“Those skates and skis and winter stuff - finding size 20, you won’t find it, I think,” said Rioux, who is from the Montreal/Quebec area.

That’s right he wears a size 20 shoe. And stands as the tallest 15 year old ever, according to the Guinness book of World Records.

Daniel Santiago is one of Rioux’s coaches. As a fellow international big man, he sees a lot of potential in each practice.

“I’m 7-feet,” said Santiago. “So he is five inches taller than me. If he is able to do some of the things I was able to do then he is going to be really, really difficult to stop.”

Rioux’s progress has been witnessed first hand by training partner Carson Cooper, who enjoys the one-on-one work they put in every day.

“It’s fun to see him improving and really fun to work with him because he’s a good player and it helps me get better,” said Cooper.

“It’s good because we’re big men and we play against each other as big men,” said Rioux.

The rest of Rioux’s IMG teammates feel the same way as Cooper. However, there were some first impressions that couldn’t be ignored.

“Shocking, intimidating,” his teammates confirmed. “But then you get to know him and he’s a nice guy. A gentle giant.”

First year head coach Jeremy Schiller has paid close attention to Rioux, particularly when it comes to the way others look at him whenever they are out in public.

“He always has a smile on his face,” said Schiller, who just took over IMG Blue after a decade as Lakewood Ranch boys basketball coach. “He always willing to take pictures. He gets it. There is no way to run from it. He can’t put on a hat and not be 7’5”.”

Oli Rioux knows a lot of eyes are on him. But that’s why he came to IMG. He wants to improve his skills to the highest level possible. That mean’s doing the little things right as a big man.

“Bend those knees and grab with two hands,” Rioux said with a smile.

If Rioux can accomplish his goals, this big man at IMG can earn a college scholarship and truly become the big man on campus.