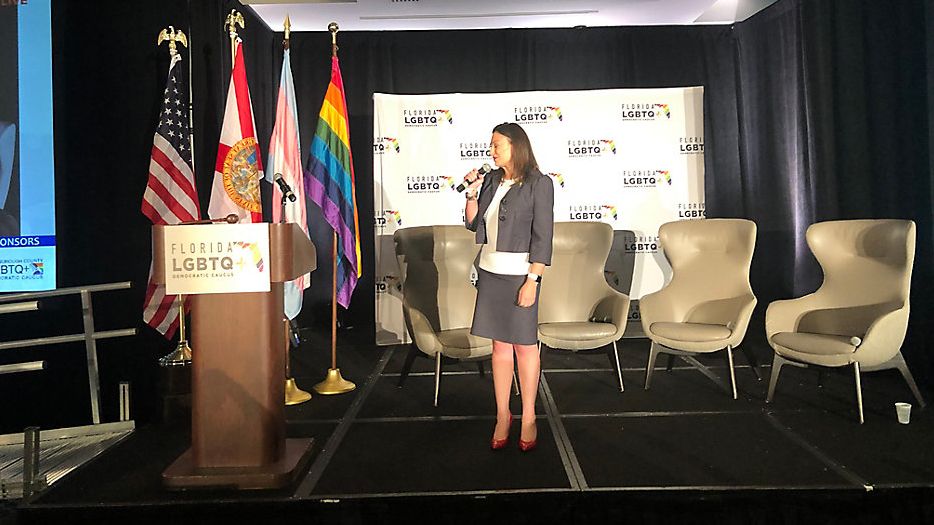 Nikki Fried says she would create a state agency for the LGBTQ community if elected governor. (Mitch Perry/Spectrum Bay News 9)

Nikki Fried received the majority of votes from the Florida LGBTQ+ Democratic Caucus on Saturday in her race against Charlie Crist for governor, 25-13, but it was one vote shy of a two-thirds majority required to get the official endorsement from the group.

Shortly after the vote was announced, the Crist camp pounced on the non-endorsement, saying it came despite the fact that the LGBTQ+ conference was taking place in Fried's home turf of Broward County and that she had “attempted to pack the room with supporters.”

Charlie Crist and Nikki Fried both spoke at the Democratic LGBTQ+ conference in Fort Lauderdale on Saturday.

“Nikki Fried has no momentum and her campaign is failing at every step of the way to reach Floridians,” said Samantha Ramirez, the communications director for the Crist campaign.

During her morning address to the group at the Westin in Fort Lauderdale, Fried declared, “If we are going to take down Ron DeSantis, I am our only shot.”

For his part, Christ came out firing against Fried in his speech in the afternoon, saying that while he respected her, he said he felt the crowd should know that she supported “a guy named Manny Diaz,” referring to the recently appointed Education Commissioner in Florida by Gov. DeSantis.

Fried said that if elected governor, she would create the first agency just for the LGBTQ+ community, so that people “can know that there’s somebody here who is going to fight for them, looking through laws, looking through agencies, standing up when you see discrimination.”

Just months into her tenure as Agriculture Commissioner in 2019, Fried appointed Nik Harris to serve as the department’s first ever LGBTQ Consumer Advocate.

Crist alluded to his previous opposition to same-sex marriage, saying that he hasn’t always been a champion for the LGBTQ community, but that he has since “come around at about the same time that President Barack Obama did.”

After Thursday's debate, the Crist camp criticized Fried for declining to say that she would support the winner of the primary in the fall.

Fried brushed off the criticism, telling Spectrum Bay News 9 that, “I am so focused on winning this primary and my primary focus is to beat Ron DeSantis. I’m the only candidate that can do it.”

Crist said it was important for the Democrats to become united after the primary is over and he will attempt to get as many independents and even moderate Republicans to embrace the Democratic ticket.

Gay rights advocates have been on defense during much of Ron DeSantis’ tenure as governor. Last year the governor signed legislation barring transgender females from playing on public school teams intended for student athletes born as girls. Since then, at least 17 others states have passed similar legislation.

Then there was the Parental Rights in Education bill earlier this year, dubbed the ‘Don’t Say Gay’ law by critics. The measure forbids classroom instruction on sexual orientation and gender identity in kindergarten through third grade. At least 19 other states have introduced similar legislation.

And now the Desantis administration is proposing that the Florida Agency for Health Care Administration deny Medicaid insurance for transition care for transgender youth.

Nathan Bruemmer, the current LGBTQ Consumer Advocate at the Dept. of Agriculture and the LGBTQ+ Democratic Caucus Legislative Director, lamented the Republican Party for their recent stances on trans and education issues.

“They argue that the parents are best suited to making decisions regarding their children, including medical decisions with the advice and expertise from their doctors, but then they’ve decided, ‘wait', you see we control each of the channels, we’re going to change what the medical advice should be in the state of Florida and then we’ll criminalize it and we’ll call it child abuse,” he said.

There were several panel discussions throughout the day with Democratic state legislators like Rep. Robin Bartleman discussing Florida’s 15-week ban on abortion.

Rep. Lauren Book and state Sen. Jason Pizzo discussed how the Democrats hope to win more seats in the Legislature, and a group of LGBTQ students discussed their protests against the Parental Rights in Education/Don’t Say Gay laws.