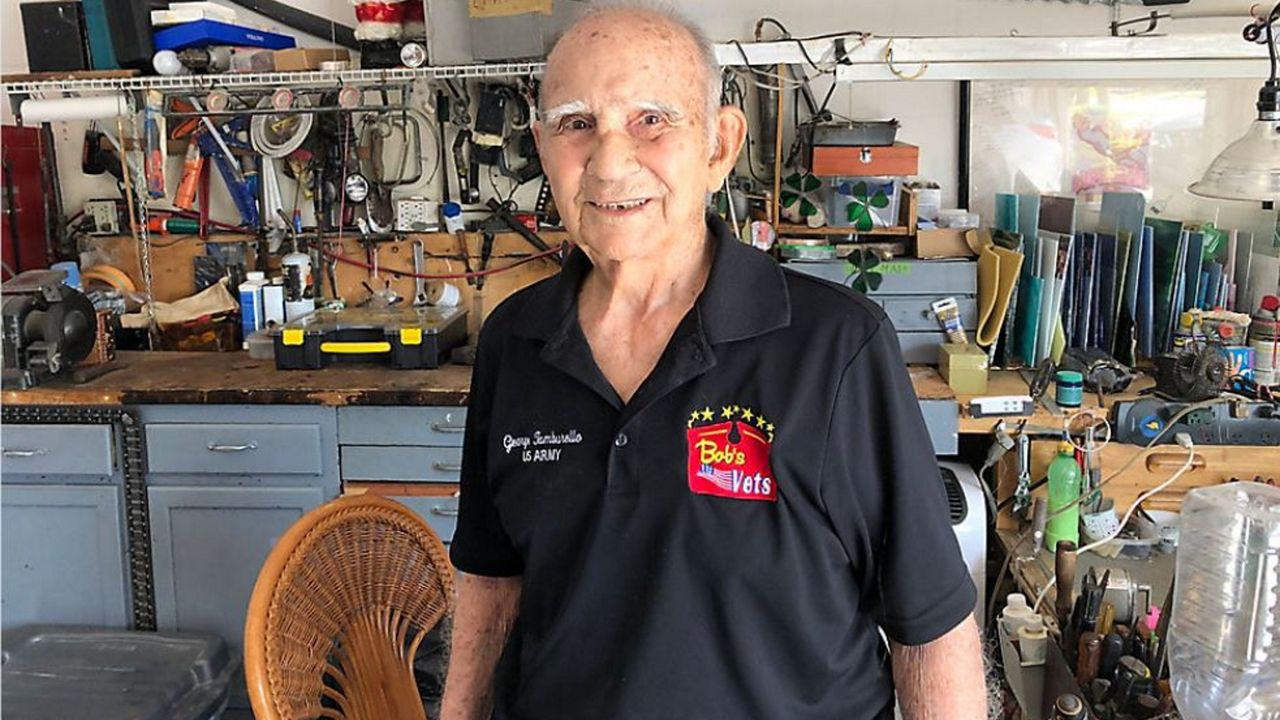 98-year-old WWII Wimauma veteran to travel to D.C. as part of Honor Flight

WIMAUMA, Fla. —  Among the 65 Tampa Bay area military veterans who will fly to Washington D.C on Tuesday to visit and reflect at the memorials dedicated in their honor is George Tamburello, a 98-year-old Wimauma resident who served in World War II.

At the age of 19 in 1943, Tamburello left his home in New Jersey to join the U.S. Army and served as an infantry anti-tank specialist.

He was awarded a Bronze Star, Purple Heart and Combat Infantry Badge during his time in uniform.

“It was kind of exciting and kind of scary,” Tamburello said about what he was feeling when he entered the war.

The excitement came from escaping his New Jersey surroundings to see another part of the world — the scary part was obvious.

“It’s just like when a dog gets loose, they run like crazy,” Tamburello said. “Well, that was the way my mind was. I couldn’t wait for the next move to see the next thing. It was a whole new life for me.”

While he joked about some of his experiences during the war, he also still instantly recalled the tension he felt.

“Take a deep breath,” he said when a reporter asks what his experience was like. “Let half of it out. You still feel it in your stomach? That’s the feeling you have. The feeling is with you day and night. You always have that tension feeling.”

After returning to the states after the war, he went into the construction business. In his late 30s, he developed a passion for building pieces of furniture, and various pieces of his own work that can be found throughout his Wimauma home.

Tamburello said that being honest is a trait that he believes in strongly — it came from one of his lowest points while fighting overseas.

“During the war, I was about to die, I was about to get blown up,” he said. “The shells were coming in, and I knew the next one was going to land on me. I got down on my hands and knees, and I prayed in the mud — it was raining and it was muddy — and I prayed to God, that if he spared my life, I would always be as honest and faithful as I could be. And honesty has been my theme.”

That comment came after Tamburello described his admiration for former President Donald Trump, who he saw as always honest, if not “a little crude.”

Always up for an adventure, he said he’s looking forward to the day trip to the nation’s capital Tuesday that is being sponsored by the West Central Florida chapter of Honor Flight. The organization transports veterans to Washington D.C. free of charge to visit the memorials dedicated to honoring their service and sacrifice.

Honor Flight will fly more than 200,000 veterans nationally to the nation’s capital this year, Gary Gilchrist of the local Honor Flight chapter said. Because of the COVID-19 pandemic, this is the first such trip for West Central Florida since 2019.

More than 900 local veterans (most of whom served in Vietnam) are on the wait list to go on a future trip to D.C., Gilchrist said.

The United States entered World War II more than 80 years ago, and the surviving number of men and women who served during that war decreases each year. About 240,000 of the 16 million Americans who served in World War II are still alive, according to the U.S. Department of Veterans Affairs.