Ranked-choice voting is an electoral system that allows people to vote for multiple candidates, in order of preference. (File Photo)

NYC is using ranked choice voting in their mayoral contest – Florida advocates ask: why not here?

Although ranked choice voting (RCV) has been used in some major American cities for years, this alternative voting system (also sometimes called “instant runoff voting”) will be getting its biggest showcase ever next month when New York City residents will choose their Democratic primary winner by ranking the eight candidates in the race. At the same time, RCV advocates in Florida say they are waiting on a ruling from the Florida Department of State to see if they can begin implementing the system, starting in Sarasota.


Why Sarasota? That’s where citizens overwhelmingly approved voting for a ranked choice system in 2007. That vote has been dismissed by the Florida Department of State, however, with officials saying it isn’t permissible under state law.

The Sarasota elections office couldn’t have implemented it immediately anyway, since the city lacked the equipment to transition to ranked choice voting. That has since been addressed, but the Department of State still has to certify the software to run the actual tabulation.

The Sarasota Herald-Tribune reported in 2019 that Secretary of State Laurel Lee doesn’t believe ranked choice voting is legal in Florida.

“Our assessment at the Department of State is that it doesn’t currently comply with statute and constitutional provisions that govern elections in our state,” Lee said.

“The Secretary of State did say that it was not permissible to run a ranked choice election under state law, but they never made a formal ruling on it,” says David Angel, counsel for the group Rank My Vote Florida.  "We have asked now for a formal ruling, and we’re expecting to get that ruling imminently.” 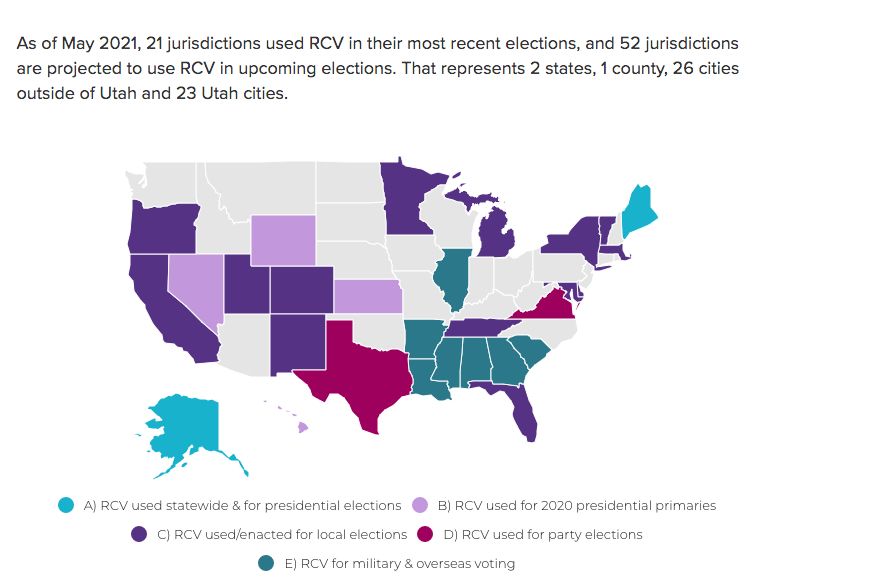 “Their initial informal opinion said it’s a plurality rule in our Constitution,” says Severini. “Whoever has the most votes after the first round, and it is clear that is correct for general elections. And we are arguing that a municipal election is not a general election.”

Severini says that his group has consulted with seven different law firms who agree that this is the case, so he remains optimistic that Secretary Lee’s office will provide them with a favorable ruling.

Ranked-choice voting is an electoral system that allows people to vote for multiple candidates, in order of preference.

Clearwater Mayor Frank Hibbard is a fan, citing the fact that ranked choice voting eliminates having runoff elections if candidates fail to achieve 50% in a primary. Clearwater doesn’t have primary elections currently, allowing candidates to win with a plurality, and not a majority vote. There have been discussions recently about potentially changing that system.

“It keeps it more affordable for candidates,” Hibbard said about the fact that it doesn’t extend a campaign. “But it also makes it where there’s less negative campaigning. Because you might not be the front runner, but you’re hoping to get a lot of secondary votes. So you might not do some of the negative campaigning that I think that everybody dislikes, but it also works, and so unfortunately, candidates use it.”

San Francisco, Minneapolis and Oakland have utilized RCV for years, and Maine conducted their presidential election last year by using that system. There are 21 jurisdictions currently using ranked choice voting, and 52 more are projected to begin using it in upcoming elections, according to FairVote.org.

That includes 23 cities in Utah that are participating in a ranked choice voting pilot this fall.

“Florida is not going to be an easy sell,” Severini said. “We believe in a cities-first approach. Where we get two, three, five cities using ranked choice to get voters comfortable. To prove that it works. And then we can start introducing legislation to go after counties, and then probably general elections. That’s a multi-year strategy.”

Spectrum Bay News 9 reached out to the Department of State for comment, but had not heard back as of the time this story was published.