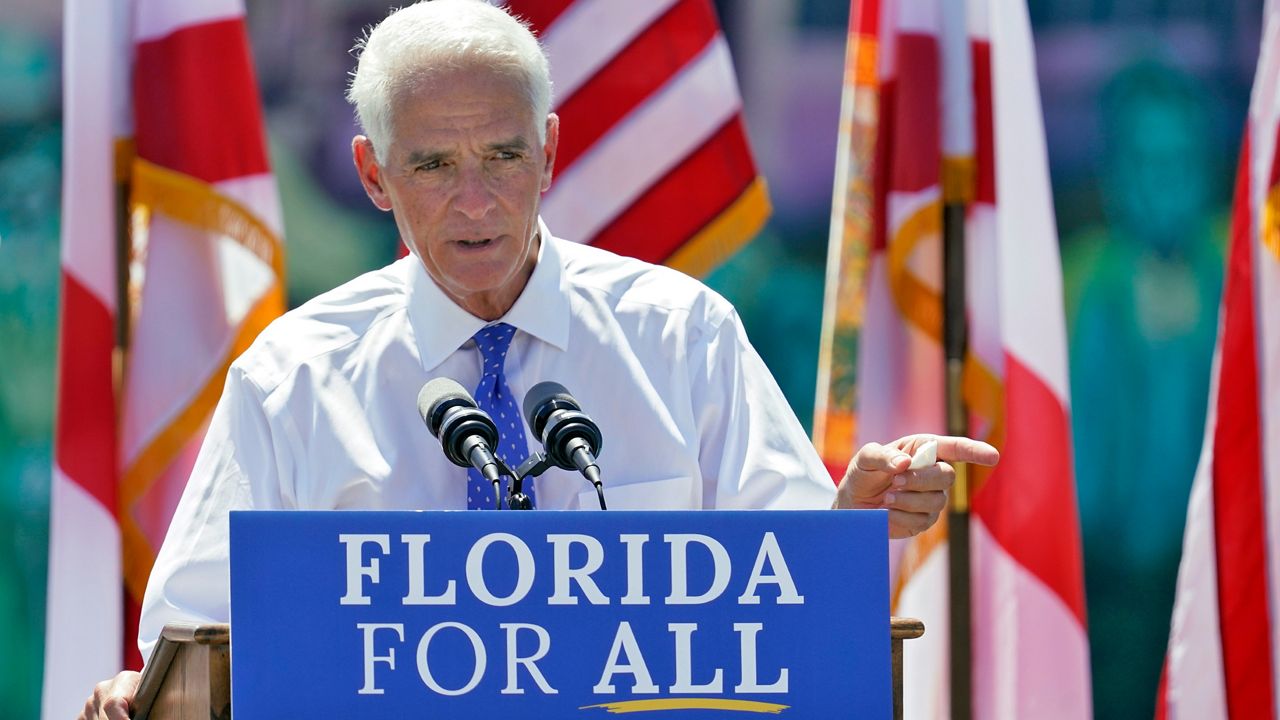 Charlie Crist makes it official: He’s running for the Democratic nomination for governor

ST. PETERSBURG, Fla. — For the third time in his political career, Charlie Crist is running for governor.

The St. Petersburg-based Democratic Congressman gave a speech shortly before noon today in front of supporters in South St. Pete, where he lambasted Gov. Ron DeSantis and the GOP-controlled Florida Legislature.

“This is a governor who doesn’t listen, doesn’t care, and doesn’t think about you- unless you can write a campaign check,” he said. “He sees our state’s wonderful diversity as a threat, not a strength we all celebrate.”

The 64-year-old Crist (he’ll be 65 in July) has already served as governor of Florida – when he was a Republican (2007-2011), sandwiched between the Jeb Bush and Rick Scott eras. Crist narrowly lost to Scott when he ran as a Democrat in 2014.

The former Republican is running on a progressive agenda. He said in his speech that he supports legalizing recreational marijuana, raising the minimum wage to $15 an hour and banning assault weapons.

Florida should be a place where hard work is rewarded, justice is equal, and opportunity is right in front of you. That's a Florida for all — and that's why I'm running for Governor.

And he said he would name a Chief Climate Change Officer to tackle what he calls the “existential threat” that a heating planet means to Florida’s future.

Crist supporters say his brand of moderate politics can play well in such a time of tumult.

“This has been a really divisive few years, for Florida and for our country and it’s really important that we get beyond this and focus on the issues for the people of Florida and I don’t know anyone better than Charlie Crist whose been able to do that,” said longtime Crist supporter Susan McGrath after his speech.

Crist is one of several Democrats who will enter the primary for 2022. Agriculture Commissioner Nikki Fried made it pretty clear after today’s Cabinet meeting that she will soon be filing to run, saying as the top-elected Democrat in Florida, “it makes absolute sense for me to be running for governor,” adding that such an announcement would not take place today.

As governor, ⁦@CharlieCrist⁩ says he’ll treat climate change ‘as the existential threat that it is”#FlaPol pic.twitter.com/ZPyqiTs8fK

Fried added that she would prefer Crist stay in Congress since he might be the only Democrat to hold on to his District 13 seat in Pinellas, with the perception being that the seat will be redrawn in a more GOP-friendly fashion after the Republican Legislature engages in the decennial redistricting process next year.

Another candidate expected to get into the Democratic primary is Orlando Congresswoman Val Demings, whose profile rose dramatically last year, where she was said to have been considered to have become Joe Biden’s running mate.

“If you’re looking at the ideal candidate today, (Crist) doesn’t necessarily meet the mold of today’s ideal candidate, especially for the Democratic Party,” says Darryl Paulson, professor emeritus of government at USF-St. Pete. “He’s the older face. He’s 64, but so is Val Demings. The difference there is that Crist seems to have been around forever. Compared to Crist, Demings is the new face and people are looking for the face in politics.”

Crist’s political career began nearly 30 years ago, when he ran and won a state Senate seat representing parts of St. Petersburg and South Tampa in 1992, when defeated longtime Democratic incumbent Helen Gordon Davis after that district was reconfigured following the redistricting process. He won a four-year term to the same seat in 1994.

He then ran for the U.S. Senate in 1998 against Democrat Bob Graham, and lost by 25 percentage points.

But he came back two years later and won a statewide seat as the head of the Commissioner of Education (before that seat became an appointed position for the governor). In 2002, he was elected as Attorney General, and then in 2006 he defeated Tampa Democrat Jim Davis by 7 points, 52 to 45 percent.

That was his highwater mark in running statewide.

Instead of running for re-election for governor in 2010, his ambitions drew him to a higher office – the U.S. Senate. But a strong challenge from up and comer Marco Rubio compelled Crist to leave the Republican Party and run as an independent. It did not end well, with Rubio defeating Crist by more than 20 percentage points (Democrat Kendrick Meek finished a distant third).

“He is the only candidate in Florida history I know of who has lost a statewide office running as a Republican, a Democrat and as then as an independent,” says Paulson. “Nobody has accomplished that feat.”

“Which party is he going to run on? Do we know for sure?,” DeSantis joked with reporters in Tallahassee this morning when he was asked about Crist’s candidacy.

The jockeying for who will succeed Crist in Florida’s 13th Congressional District is just about to begin. Actually it already did on Monday, when the GOP nominee in 2020, 31-year-old Air Force Veteran Anna Paulina Luna, became the first name Republican to enter the race.

When it comes to Democrats, the most frequently invoked names by politicos to get into the race is St. Petersburg-based state Rep. Ben Diamond and former Obama administration official Eric Lynn.  Another possibility could be St. Petersburg Mayor Rick Kriseman, who will be term-limited from his job next January.