State Agency Grants Protection Against Discrimination for All LGBTQ Floridians

While LGBTQ Floridians in more than half of the state live in cities or counties where it’s unlawful to be discriminated against, those protections are now statewide, after the Florida Commission on Human Relations (FCHR) announced last week that it will enforce a Supreme Court ruling that said discrimination based on gender and sexual orientation is illegal.

The U.S. Supreme Court ruled in June of 2020 in Bostock v. Clayton County that Title VII’s prohibition on discrimination “because of…sex” covers discrimination on the basis of gender identity and sexual orientation.

“We’ve been working with the Commission for quite some time, having conversations since the Bostock ruling, and it was clear that there was support among commissioners,” says Nadine Smith, executive director of Equality Florida. She says that the Commission actually held two votes on the matter, because she says the language in the first draft “wasn’t as comprehensive as it needed to be.”

For over a decade, Equality Florida and other like-minded organizations have advocated for the passage of legislation that would include the LGBTQ community in a statewide anti-discrimination law. That bill, the Florida Competitive Workforce Act, had picked up a number of co-sponsors from members of both sides of the political aisle in recent years, but rarely if ever would get a hearing in committees.

Among those advocating for such a law is the group Florida Competes, a coalition of more than 450 small, medium and large businesses throughout the state. 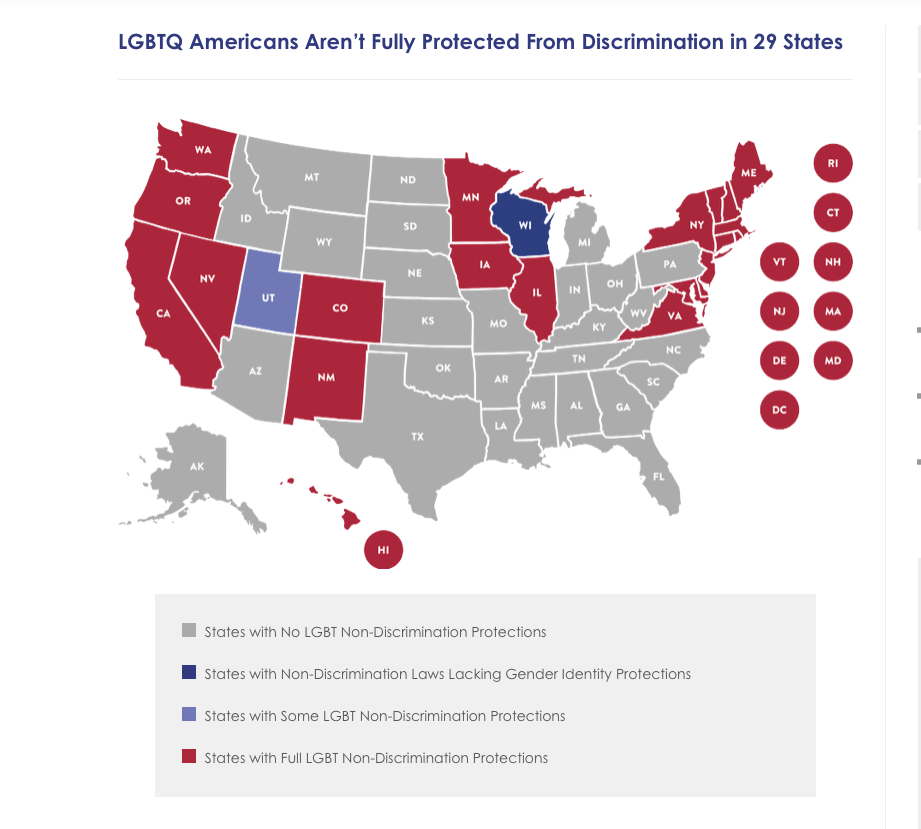 “The economic case for it has been strong for such a long time,” says John Tonnison, the recently retired CIO and executive vice-president for Tech Data, the Clearwater-based Fortune 100 technology distribution company. “This is a significant shift for Florida in positioning itself credibly and competitively in global markets, which is important to a number of our Compete members.”

The Florida Commission on Human Relations is made up of 11 members, six of whom were appointed by Gov. Ron DeSantis last year. One of those members the governor appointed is Monica Cepero, deputy county administrator in Broward County.

“In my nearly 30 years of public service, I can’t think of many more significant milestones that I have been honored to be a part of,” Cepero said in a written statement last week. “Discrimination in any form is unacceptable and I’m proud to be a part of a Commission that values equal treatment and has the courage to do the right thing to protect the residents of the State of Florida.”

“This does not reflect the governor’s values. It does not reflect the public policy of the Republican Party or the legislative body that’s enacted right now,” he says. “I just think it’s a bad law and it’s being used to punish people who have a view about human sexuality.”

The DeSantis administration has not publicly commented on the Commission’s decision.

Just hours after he officially took office in  January of 2019, the governor issued an executive order stating that it was the policy of his administration to prohibit discrimination in employment based on age, sex, race, color, religion, national origin, marital status or disability.

Missing from the list was any mention of protections based on sexual orientation and gender identity, which irked some Democrats. Six months later he told reporters that he saw no need to include LGBTQ members in that executive order.

Over the past couple of decades, more than 40 local governments (including Tampa, St. Petersburg, Dunedin, Gulfport, Pinellas and Hillsborough Counties) have passed their own ordinances prohibiting discrimination against the LGBTQ community, but now those protections go statewide.

“Some of those local ordinances actually do more than our state civil rights law does,” says Smith. “So that work has been tremendous in changing hearts and minds. What we can’t forget is that 40 percent of the population were living in places with no clear path. Bostock changed that and the Florida Commission on Human Relations made it clear that they would abide by the Bostock decision.”