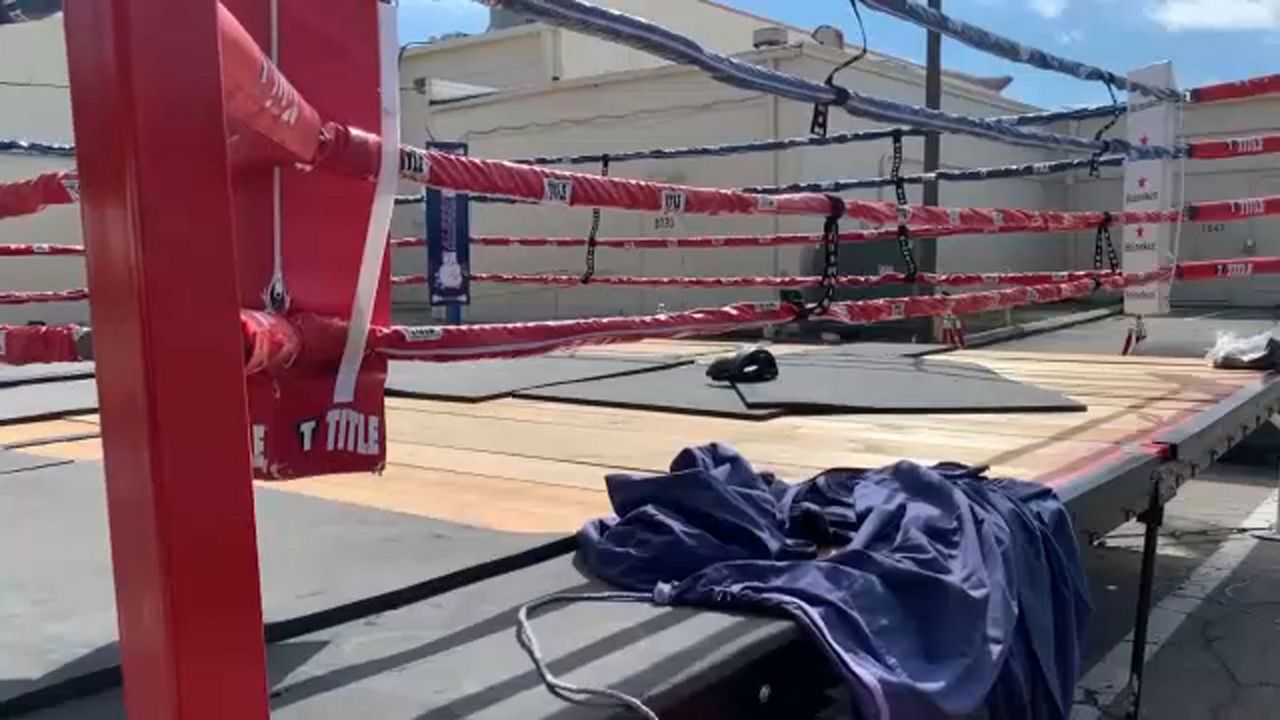 An empty boxing ring where a shooting took place at an outdoor event in St. Petersburg Saturday. (Spectrum News)

Trevon Montrell Barton, 21, was killed during the shooting at the Skyway Plaza, where the "neighborhood boxing league" event was taking place. According to St. Pete police, a temporary boxing ring was set up in the back parking lot.

Spectrum Bay News 9's Trevor Pettiford confirmed that St. Pete Councilwoman Lisa Wheeler-Bowman owns the property and leases it out. She said the victim who was killed was the brother of an employee of hers.

Police said around 200 people were at the event when two groups got into an altercation and shots were fired. Four other people, two men and two women, were injured from the gunfire.

So far, one person has been arrested, according to police. Robert Cooley, 21, is charged with carrying a concealed firearm and discharge of a firearm in public.

Moments after this community boxing match ended in St. Petersburg -- Police say a gunfight happened between two groups. One of the fighters tells me @BN9 that more than 200+ people attended this event in support of the movement 'Guns Down, Gloves Up.' pic.twitter.com/pyjnb0MFGf

A member of the Neighborhood Boxing League spoke to Spectrum Bay News 9's Fadia Patterson about the league.

The boxer shared video from his match Saturday. In that video he is wearing grey shorts and knocks out an opponent from St. Petersburg.

Pielay says the mood quickly changed after that knockout.

"They were real deal mad about me knocking him out," he said.

He says his match was the last fight of the evening.

"We were already on our way back to Tampa," he said. Several people called to check on him when the shooting occured. "I'm thinking why is stuff like this going on at an event that says 'Gloves up, Guns down?"

It's a question plenty of people have been asking in the Bay area since the shooting.

"The purpose of the [Neighborhood Boxing] League is to bring down violence," said Pielay, who says he discovered a brotherhood in joining the league.

He says he's participated in more than a dozen fights with the league and says nothing like this has happened before.

The Neighborhood Boxing League released the following statement which says in part:

"We do not promote gun violence in any shape or form and want to acknowledge that the shooting that took Saturday night was not a result of the event."