TAMPA, Fla. — The American Society of Civil Engineers gave Florida's critical overall infrastructure a grade of C in its report for the state released Wednesday.

As Florida’s population continues to grow, keeping our roads, bridges and schools up to date is critical, according to the ASCE.

The ASCE's report card covers 14 sectors, grading everything from aviation to roads and bridges to ports, transit and schools.

While Florida's overall grade was a C, the engineers did find the state's ports and bridges to be in good (B) shape. However, schools were given a D+ grade and transit, stormwater and wastewater all received a C grade.

Levees, critical because of the state's history of hurricanes and rising waters attributed to climate change, also received a D.

The state's solid waste system earned the highest grade, a B+.

"The good news is that investment to stem the backlog of mediocre infrastructure conditions can help turn the tide for Florida’s economy and our workers," engineers said in the report. "Several rising grades have resulted from focused investment in areas like coastal areas, energy and ports, or where FDOT, FDEP, and other local agencies are pushing smart investment solutions in roadways and stormwater systems. 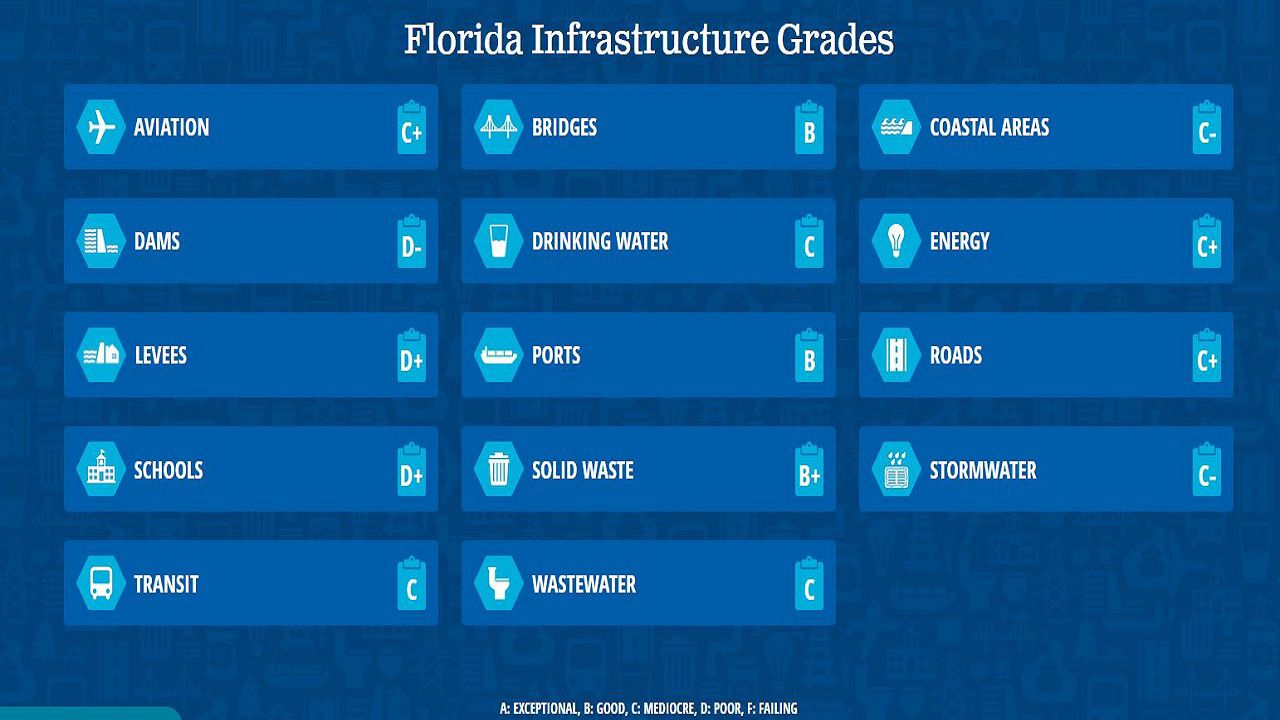 "The grades range from B+ to D- and overall are higher than the National Report Card average," the report said. "Florida’s population has grown at a rate of about 1% per year, adding about 300,000 people, which is the equivalent of adding a city the size of Orlando every year. Investing in infrastructure must be Florida’s top priority so we can continue to be the place people want to live and work."

Florida officials said while there is one major issue with this country’s infrastructure, the report card can spur change.

“Primarily, there are problems with funding our infrastructure,” said Kathleen Ruvarac with the American Society of Civil Engineers Florida Section. “Residents can use the report card particularly with their neighborhood associations, and their churches, and being involved with their childrens schools and use it as a tool with their local chamber of commerce and their businesses to advance the information."