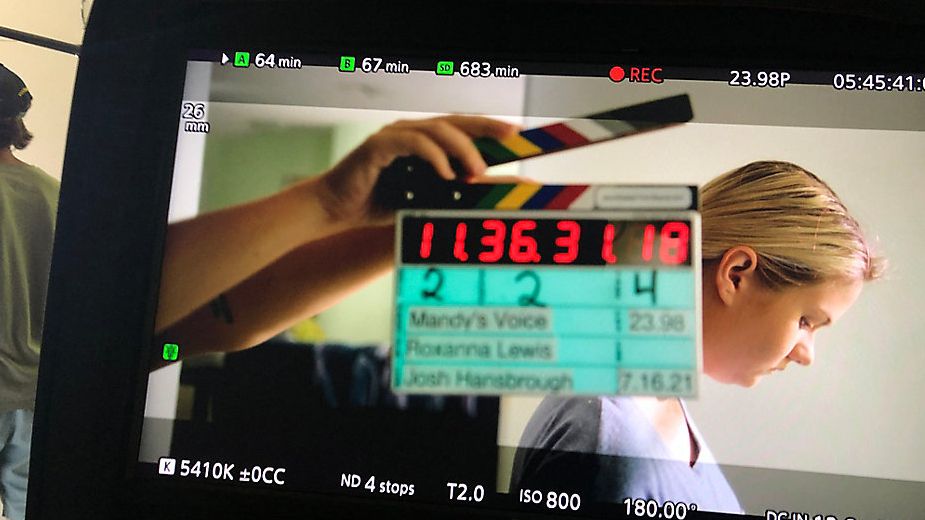 From the set of Mandy's Voice (Roxanna Lewis, director)

Rachel Barcellona, 25, does this all despite being autistic.

For the role, she leaned on her own life for inspiration.

“I found out I have more in common with this character than I thought I would,” Barcellona said in an interview at her Palm Harbor home. “Because we go through the same struggles. Our parents don’t understand us. Society doesn’t understand us.”

Mandy’s Voice is based on real life.

Always great to see my friend, Rachel Barcellona! She is autistic but is now starring in @mandysvoicefilm, a short film about a girl who is non-verbal. @BN9 @BarcellonaR 🎥 pic.twitter.com/XgF9gkAlsp

Rachel plays Mandy, a girl who struggles to communicate, especially with her mother, played by Karen Sillas. Sillas has appeared in shows like The Sopranos and Law & Order.

“I’m very aware that there is a real lack of representation on screens that celebrate the voices, the portrayal and employment of people with different abilities,” Lewis said in an interview.

To that end, a third of her cast and crew for this film is on the autism spectrum.

Mandy’s Voice was just shot in Jacksonville and is now in post-production. Lewis hopes the short film will be released in film festivals this fall.

Finding someone talented like Rachel, who is from Palm Harbor and attended USF, was a big deal for Lewis, who wanted that authenticity in her film.

“She just brought every ounce of her DNA to this character and literally left it all on the floor for us,” Lewis said.

Above all else, Barcellona says she is an autism advocate. Though she has done big things like compete in the Miss Florida pageant or speak at the United Nations, Mandy’s Voice is another step in her journey to help others.

“The film is really about the pressures that are on non-speaking autistic people,” Barcellona said. “More often than not, people write them off as people who can’t do anything. But it doesn’t matter what disability you have. At the end of the day, you’re capable of doing anything you set your mind to.”