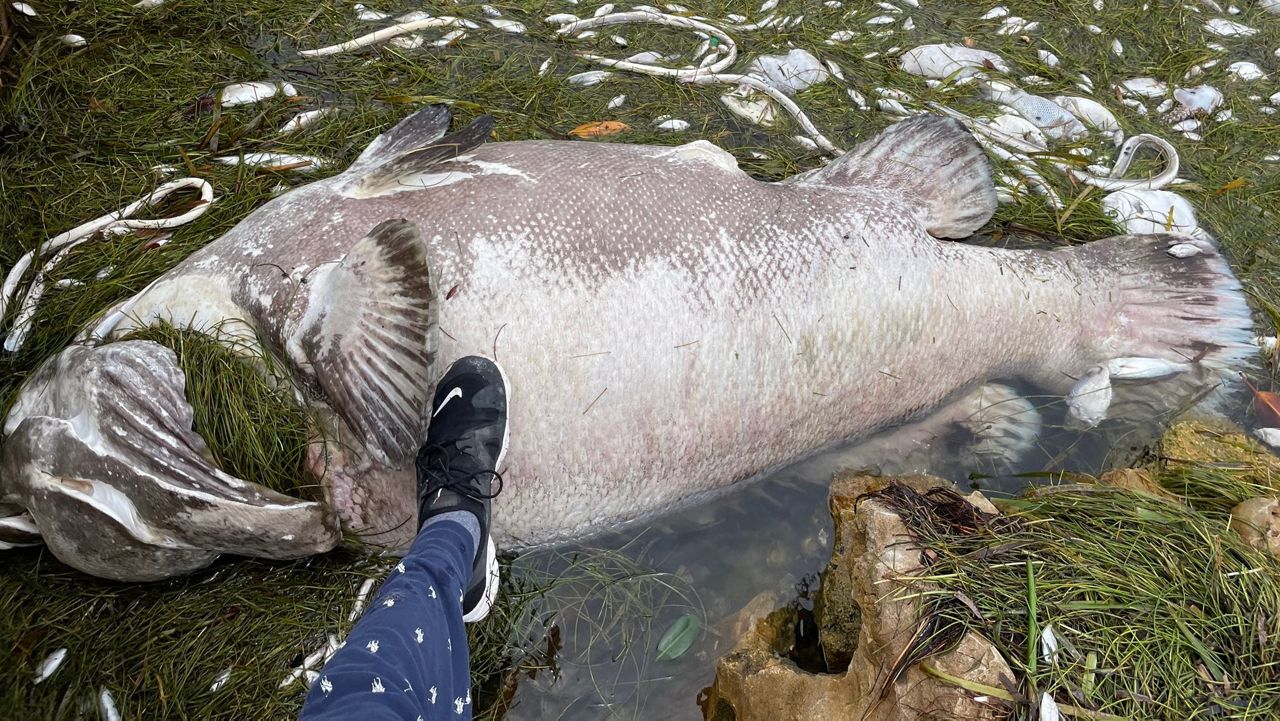 ST. PETERSBURG, Fla. — High concentrations of red tide in Tampa Bay off the St. Petersburg shoreline have caused extensive fish kills for nine straight days and residents want the city to clean up the mess faster.

Allen lives in a condo at Waterside South in Coquina Key where thousands of dead fish have filled a canal after Tropical Storm Elsa passed by Pinellas County on Wednesday.

"It's almost like you can walk across the water on the fish," she said. "That's what it feels like and that's what we saw first thing this morning when we woke up from the storm."

Allen said Waterside South residents had been dealing with fish kills for the past two weeks but it was much worse after Elsa. The combination of red tide toxins in the air and rotting fish is too much for some residents to handle.

"You can't be outside. Some people have left. Some people have gone to hotels," said Allen. "You get a headache, you get some coughing, you have to hold your nose if you're going to walk by it with your dog." ​

According to the Florida Fish and Wildlife Conservation Commission, there's medium to high concentrations of red tide from south St. Pete north to Coffee Pot Bayuo. Spectrum News asked Carly Jones with FWC's Fish and Wildlife Research Institute about what she believes killed the Goliath groupers.

"Our fish kill staff have responded to multiple reports of dead fish in this area," she said. "Red tide is the likely cause, as it is present in the area."

On that same day at North Shore Park, an extremely low tide caused by Elsa exposed tens of thousands of dead fish along the shoreline. The next day the city pushed those fish into a pile at the park.

Last Friday, thousands of dead fish could be seen stacked up in a Shore Acres canal.

"Why isn't Fish and Wildlife or St. Pete cleaning up the smelly mess from the canals?" asked resident Omar Rodriguez. "The smell is unbearable."

Ben Kirby, the spokesman for Mayor Rick Kriseman, said "as a point of reference, our staff have been collecting dead fish for nine straight days in a row — including over the holiday weekend."

Kirby said once the city completed its post-Elsa recovery this morning, they put crew back on dead-fish patrol.

"We are aware of North Shore and Coquina," he stated. "A Coquina resident called a council member and the stormwater department complaining about Coquina yesterday — while our teams were busy filling 16,500 sandbags for residents. Our Public Works teams is doing their best and will continue to do so."

"There's no place for them to go," she said. "So, somebody has got to come move them along."

The FWC encourages anyone who sees dead fish to report it to the FWC.

Sometimes storm events like Elsa can help disburse a lot of red tide. USF College of Marine Science Professor Robert Weisberg said they hope to figure out if that happened soon.