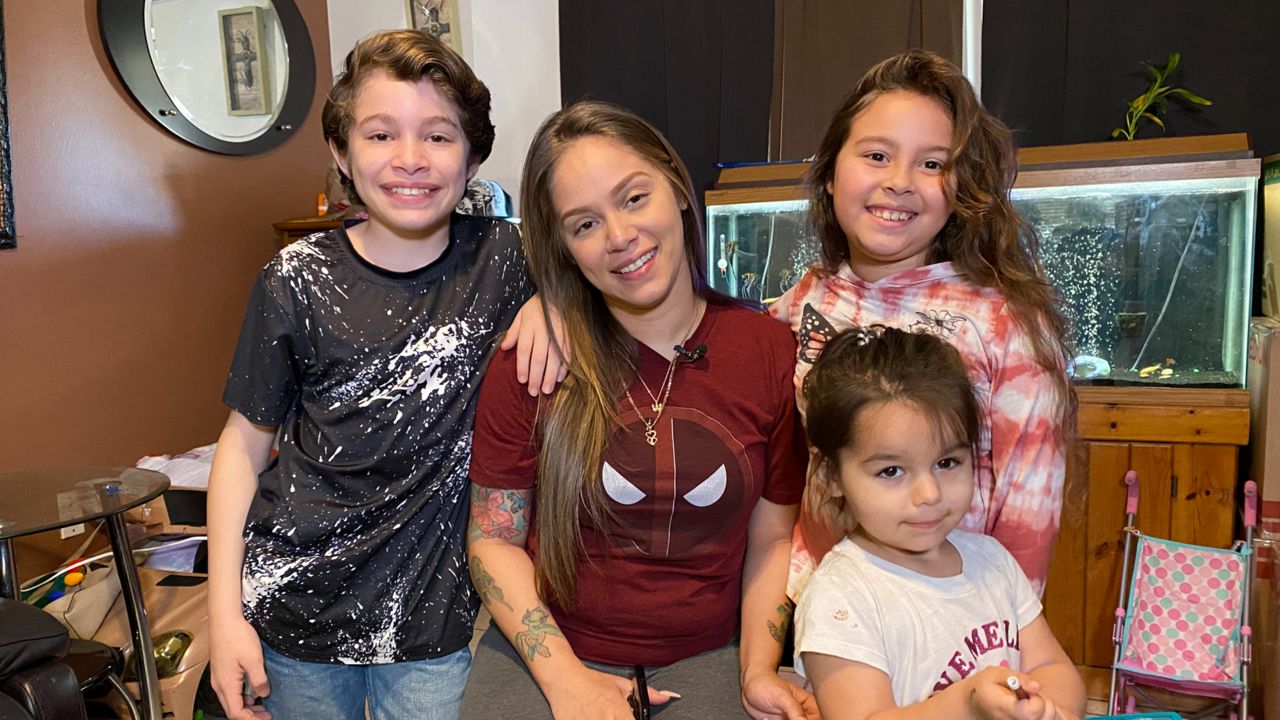 Crystal Garcia, 31, says that until her layoff, she'd been working steadily since she was 15. Now, the former medical assistant spends her days checking on the status of stalled state unemployment payments while taking care of her children. (Molly Duerig/Spectrum News 13)

Year of COVID: Housing Policy, Post-Pandemic: What Needs to Change?


The 31-year-old mother of three says she’s independent, and that since she was 15, she’s always held down a job.

But now, a year after the coronavirus began spreading widely throughout the U.S., Garcia is living a harsh new reality.

Out of work since August, the former medical assistant now spends her days at home with her kids, switching between roles: from teacher’s aide to cook to accountant and back again, often in a matter of minutes.

“It’s definitely taking a toll,” Garcia said, adding that she’s “fearful” of what could happen to her family if they can’t access more assistance soon. Already three rental payments behind by the beginning of March, Garcia said she’s missing seven weeks of unemployment payments from Florida’s Department of Economic Opportunity — an issue that’s plagued thousands of laid-off Florida workers throughout the pandemic, as Spectrum News has documented.

Garcia’s not alone in her rent struggles, either. On the contrary, 18% of Americans are behind on rent, according to a January report from Moody’s Analytics. Federal relief funds for housing and utility assistance have been slow to arrive to people who need them during the pandemic, according to a national survey of 220 emergency rent assistance programs that found program administrators have struggled most often with staff capacity and incomplete applications for aid.

Nearly half of surveyed programs cited landlord cooperation as a significant barrier to getting assistance out, too. Garcia said she had to wait 42 days for her landlord to decide whether he’d participate in Orange County’s eviction diversion program, which paid up to $4,000 in back rent for approved applicants. (Eventually, Garcia said, her landlord agreed and took the assistance.)

One recent Friday morning, Garcia checked on her stalled unemployment payments in between heating up lunch for her 12-year-old son and helping her 8-year-old daughter finish a math assignment.

“It’s really just trying to let them know that you as a parent are doing the best that (you) can and make them feel confident and comfortable that we're going to get through it,” Garcia said.

A Need for Change?

Some lawmakers and housing advocates think U.S. housing policy is in need of major change — including, in some cases, change specifically addressing the impact of COVID-19.

In Florida, state Sen. Darryl Rouson, whose district includes parts of Pinellas and Hillsborough counties, has introduced SB 926, which would allow defendants in COVID-19-related eviction cases to request the court to seal those records from the public. The bill targets “goodwill people who need housing” and deserve a chance to start again fresh after COVID-19, the Democrat told Spectrum News.

Generally, an eviction stays on your public record for about seven years. It’s a glaring “red flag” for landlords during the tenant screening process — a major issue for prospective renters that could soon affect more Americans than ever before, according to Shamus Roller, executive director of the National Housing Law Project.

“I think what we're going to find is that there are going to be all these people who were able to pay their rent before the pandemic happened, and who were paying all their bills, who come out of this with significant debt ... with eviction records, with lower credit scores,” Roller said.

Other housing industry players caution against reacting too rashly. Apartment Association of Greater Orlando CEO Chip Tatum said that rather than attempting to fundamentally restructure housing policy, governments should instead prioritize getting rent relief to the tenants — and landlords — who desperately need it.

“We're still not seeing this flood of evictions that had been predicted,” Tatum said.

Indeed, Orange County Clerk of Courts data show eviction filings fell almost 40% in 2020 from 2019, likely due in part to various state and federal eviction moratoriums created during the pandemic. But local courts have struggled to consistently interpret these moratoriums and inform residents of how to seek protection under them, Spectrum News found.

A lack of consistency and enforcement around the CDC’s national eviction moratorium leaves open the question of whether the measure is actually protecting everyone it could.

“If you can factually prove that you lost your job or something happened and it was COVID-related — this impacted the whole world. So it's understandable,” Bright said.

The dilemma for Bright, though, is one that’s persisted throughout the pandemic for program administrators, courts, and landlords alike: how to tell who truly was adversely impacted by COVID-19?

“With anything, there's always ability for people to finesse the system,” Bright said. “You're going to have plenty of tenants that were not impacted by COVID but use it as an excuse.”

At the federal level, House Rep. Greg Stanton (D-Ariz.) recently introduced a bill with the same ultimate objective as Rouson’s: to limit the impact of a COVID-19-related eviction on somebody’s public record. If enacted, House Resolution 1594 would amend the Fair Credit Reporting Act by requiring credit reporting agencies to exclude certain evictions from consumer reports.

“People Have Opened Their Eyes”

As Americans await more stimulus money from the American Rescue Act, Garcia is just trying to keep her head above water.

She said she filled out — even notarized — the CDC’s declaration form for tenants who believe they qualify for temporary protection from eviction under the agency order. Garcia said she gave the form to her landlord, but he denied it. Since Garcia’s lease was up at the end of February, her landlord told her the CDC’s moratorium wouldn’t apply, Garcia said.

“It's one thing after the next,” Garcia said. “You do as you're told, and then there's still some type of consequence for you doing as you're told.”

Florida lawmakers have recently proposed several other pieces of housing legislation, including SB 1090, which would remove the state’s current “pay to play” requirement for eviction defendants to pay courts the full amount of back rent they allegedly owe before case proceedings may continue.

Democratic Sen. Victor Torres, who proposed SB 1090, said a defendant’s right to appear in court and present their case shouldn’t depend on how much money they have.

“You don't have to have money in that registry to be able to go before the court,” said Torres, whose district covers parts of Orange and Osceola counties. “I think that's unfair and not conducive to our situation today with this pandemic.”

Garcia said that although her own family’s immediate future remains uncertain, she’s somewhat encouraged by a growing awareness of what lower-income families experience.

“In this last year, I think that people have opened their eyes,” Garcia said. “Us lower and middle-class people, you know, we're not rich. We do live paycheck to paycheck, and it's hard.”

Her goal, above all, is to make sure her kids are OK, Garcia said.

“(My son) needs to be able to put all of this together and understand: ‘Hey, this is what my mom went through. I want to do better,’” Garcia said. “‘She tried to do better for me.’”

Molly Duerig is a Report for America corps member who is covering affordable housing for Spectrum News 13. Report for America is a nonprofit national service program that places journalists in local newsrooms to report on undercovered issues.