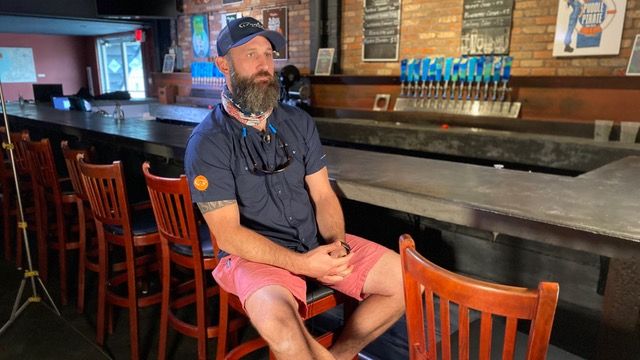 Life in the Time of Coronavirus: Veteran Pivots New Brewery Business to Success in Pandemic

Fast forward to today and his Bayboro Brewery in the Warehouse Arts District of St. Petersburg is still open. They did all the “pivoting” and figured out how to make it at limited capacities while enforcing coronavirus health practices.

He credits his family, his wife’s family and his head brewer’s family for their support, as well the outpouring of community support.

He said his life experiences and that of other veterans better prepared them for this world emergency.

His brewery has nods to different branches of the U.S. Armed Forces.

Beer and Cider labels have WWII Bomber Pin-Up Style art, as well one homage to the aforementioned Head Brewer Preston Dolinger, with references to the lore of each.

“It was a way of like making sure that military guys knew that this was a safe place for them,” said Coleman. “I do have a puddle pirate for the Coast Guard that was named by a “Coastie” so that no one could get mad at me. He said it, not me.”

Coleman’s greatest passion is to do something—anything—to stem the alarming statistics of veteran suicides.

“I think there's a lot of military veterans that are one connection away from someone that committed suicide from being in the military and this has been happening for years,” he added.

Coleman stressed that without outreach groups and VA programs, veterans come home and lose a sense of community. He is hoping to learn more about suicide prevention training for himself and his staff.